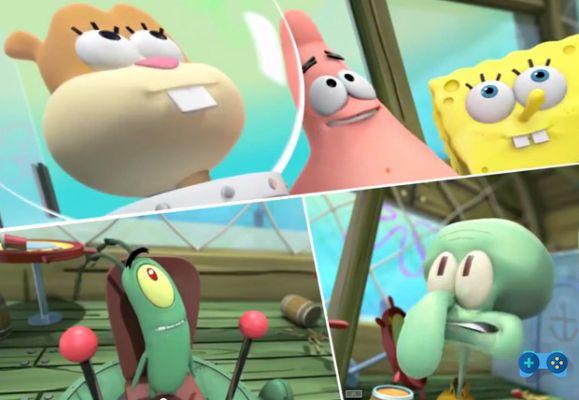 What happens when Spongebob becomes a superhero?

Creating a video game based on a movie currently being released in cinemas is not a bad idea in principle. It makes players who have enjoyed the film happy and at the same time yields a figure usually proportional to success. What is a bad idea, however, is to leverage the popularity of a brand, a character or a series just to feed the public a real crap. Of the popularity of the yellow sponge of Nickelodeon and of his companions there is no need to doubt: any crazy person simply loves them without asking too many questions about the improbability of fires lit at the bottom of the sea, talking sponges and water squirrels. On the ability of Behavior Interactive to draw us a video game worthy of being called such, however, one can doubt. And how.

Let's save the world for a change

Spongebob Heropants begins where the movie ends: our hero and his friends have saved the world from the threat of Bluebeard and recovered the magic book, which is magical because anything written on it comes true. But as soon as Bikini Bottom returns to normal, a new problem arises out of nowhere: the book is missing pages, which have mysteriously disappeared. This is causing strange phenomena, such as the total anarchy of Plankton's robots towards their creator, hamburgers that come to life and attack the inhabitants, a Squiddosaurus walking in the park and more that we do not want to ruin (so to speak, given that nothing in itself works). What do you do then?

Bubbles, the talking dolphin who holds the cosmological order for some strange reason, appears out of nowhere coming out of a space triangle and asks Spongebob and his companions to find the cause of the problems, if possible also recovering the missing pages of the book. To help them he grants them the privilege to transform back into SUPER versions of the characters already seen in the film: or Invincibolla for Spongebob, Patrick Gelataio (he doesn't have an official name and we don't have much imagination anymore), Stonatore for Quiddy, Iron Crab for Mister Crab (we invented this too, and it's spot on since it is clearly a reinterpretation crustacea of ​​Iron Man), Squirrel for Sandy, Planthulk for Plankton.

At this point, after the prologue, the player's interest also ends. Steps to the plot with originality at an all-time low, so much so that it was almost better to re-propose the events of the animated film, or Spongebob Out of The Water, you also pass anarrative inability to build anything interesting in the continuation of the events (the other three animated interludes will be limited to a "well, we did this, let's move on to this, let's finish with this, hello everyone"), the videogame takes the form of something shapeless that doesn't taste like meat or (peculiar case for an adventure at the bottom of the sea) of fish.

The game consists of 15 levels, 5 set in Bikini Bottom, 5 in prehistoric times (which is only the darkest Bikini Bottom), 5 in the mind of Spongebob aka the land of cotton candy. End. The adventure lasts three hours if you are really clumsy and like to throw yourself into the void or walk standing still towards the walls, since the difficulty is completely absent. Once the plot is over, there is nothing else to do, except collect 15 collectibles that are practically put in the middle of the path and that only a blind person would be able to not find, and the various pages of the book, only a pair of which are properly "hidden". To collect them all it will be necessary to completely replay the various levels with other characters, because the doors that keep them open only in the presence of this or that.

The playable characters are six, and we have listed them with regard to the transformations: Spongebob and company. Their super versions are just fun to use, jump higher and hit harder, but you could easily complete the game without using them even once. They are, in fact, the only element worthy of note and on which the production would like to focus: but it does not succeed, it does not offer any challenge worthy of making them fundamental and inserts them just to recall the film of the yellow sponge. The mechanics are that of an action game with platforms, but calling it a platform would be an insult to platformers, so we refrain from it: fairly long levels, platforms here and there, enemies everywhere, straight road that leads from the beginning of the level to the its end without a minimum of uncertainty.

Coins are scattered around the levels that make an obnoxious sound when you collect them, but the audio will get its fair share of hatred in the next chapter. What is important here is the importance of coins: that is, none. They theoretically enhance the characters at the end of each level, when you can use them to make various upgrades. In practice, they remain a nice ornament, as you don't need to upgrade anything to complete the game. Since the super boost of the characters is temporary, if anything with coins you can reduce the recharge and use times, since it is very frustrating to return to the basic version while you are jumping or fighting. Apart from this, they will only interest those who for some strange reason want to complete the game 100% (the Ps Vita version also has a platinum, simple but boring, exactly like the proposed adventure).


Give me the frames back

The technical sector is perhaps the most bleak aspect of all, and this in itself speaks volumes, given that the game does not shine neither for plot, nor for game mechanics, nor for difficulty, in short, it just doesn't shine. But the programming of the whole, the polygonal models, the textures, the animations really get your hands on your hair, and ask if there isn't some particularly sadistic or bad element among the programmers who wants to kill Spongebob. When the game goes well, it runs about twenty frames, which drop dramatically to negative numbers in the most agitated situations.. If six or seven hamburges attack you at the same time, or the frame of the level shifts, the frames practically no longer exist, gone, caput. Spongebob begins to move in jerks, Bikini Bottom seems on the verge of universal collapse, enemies become transparent, your parents ask you why the hell are you spending your money like this.

But that's not all: in buildings that are supposed to be solid, you can easily look at them as if they were transparent. Going through seemingly closed doors is not a problem if you can pass through them like ghosts. Objects that should land on the platforms remain suspended in the air, then descend as they please, according to their needs. It comes to think of a joke, that Activision is hiding the real game somewhere. Unfortunately, that's all
true, this offers the convent.

Graphically we are at an all-time low of polygonal poverty and visual details: on the screen there are few elements, badly distributed so much that they often obstruct the path, the colors are either too dull or too bright, a cauldron of small errors that turns into a general mess. Spongebob is not beautiful to look at, even the heroes are not beautiful to look at: then if we talk about feeling, it is better to go downstairs to play football. The music is all the same, in all levels, they start from scratch every few seconds, the best thing to do is to reduce the volume to zero. The only positive note, the original Spanish dubbing with the voices of the official voice actors, is penalized by the fact that what the characters say is not heard, because their voice is too low and because the sounds of the scenarios and environments overwhelm them. The resulting confusion gives a mixture of hilarity, sadness and compassion.