Never as in this period i sandbox have enjoyed fame and popularity, attracting legions of players: Portal Knights it fits into the wave of the phenomenon of the moment, trying to carve out its own place in the sun. And he succeeds more than with dignity.

To launch the genre was Minecraft, now too many years ago, passing within a five-year period from a product for a few connoisseurs to a real fashion, even guaranteeing its acquisition by Microsoft studios.

And to think that the skeptics saw precisely in the great "opening" offered by the possibilities of Minecraft even its more great limit: in an era where every player must be guided from point A to point B, in which we are full of suggestions and almost have to feed us to let us play, what would have happened if out of the blue an immense world had been offered to the player, in could he literally do anything and build himself buildings and environments?

Portal Knights goes with the recent Lego Worlds, but while the second leveraged the charisma of LEGO bricks, the first tried to carve out a gorge of originality thanks to mechanics sketched in RPG style, approaching the appreciated Dragon Quest Builders. But in this case, are the bricks worth the candle?


A story mode… more or less

Portal Knights in theory it has a plot, or at least a sketch of it, but it is a pure narrative pretext to kick off the adventure of the single player. We start from a rather skeletal preamble, which informs us of how an ancient cataclysm, the Fracture, has heavily altered the game universe in which we will soon have to immerse ourselves, in short, a classic. The planets that make up the universe are no longer interc 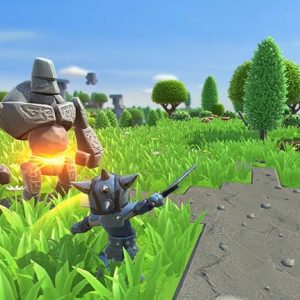 connected, because the magical portals that made them communicating have stopped working (hence the name of the title, the Knights of the Portals).

It is in fact our task to reassemble them, recovering the components scattered around the environment and placing them exactly in their original position, naturally once the monsters that guard them have been eliminated. Never as on this occasion are we faced with a pure and simple pretext to challenge the controller and throw ourselves headlong into the enterprise that awaits us. Interest in the narrative is almost immediately lost after the meager textual introduction and something more, in this sense, it could certainly have been done, if only to facilitate the involvement of the user over the long distance.

At the time of starting each new game, the software asks the player to model their avatar (a cross between a Mii and a Minecraft character) using a rather intuitive editor and to assign it to a class among the three available, that is Warrior, Archer and Magician. One is obviously oriented to melee, the other to the offensive from a distance, the other still to elemental attacks based on mana, but it is perhaps more important to specify that, to the detriment of the product's "creative sandbox" lineage, each of them possesses its own passive talent tree, manageable after each character level up.


Many worlds, many blocks

Similarly to Minecraft, but trying to enrich the basic formula, too Portal Knights puts its essence in building and crafting anything you can think of. And there is plenty of material available. Basically, the planets of Portal Knights are nothing more than expanses of colorful blocks, less inclined to the aesthetics of Minecraft as they are more polished and "artistic" (graphically and stylistically we are in short in the presence of a much more refined title), but however subjected to the same logic of Mojang's work. So the cubes, made of the most varied materials, can be extracted from the setting to be relocated as you wish, for example to repair cottages, build bridges and platforms, and much more.

In addition to the possibility of building and "cultivating", since it is possible to cut down trees and shrubs and then replant their seeds in their plots, the title developed by Keen games he does not even renounce the same vein cr 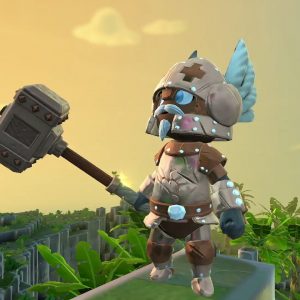 afting of many of his peers. In fact, each world hosts a myriad of objects that can be collected and assembled to obtain tools, potions, furnishings, weapons, rings and armor that, needless to say, influence the character's attack and defense statistics: and this is precisely where the RPG mechanics, the real novelty offered by Portal Knights.

Also, as in the best sandboxes, Portal Knights does not press the user in any way, who is actually totally free to decide which of the many activities to devote himself to as a priority and at the pace he deems appropriate. We have the Events, daily challenges in which we will have to find a certain number of items, or defeat enemies of a certain type, within a given time limit; or even short missions that you are certain of NPC sparsthe for the lands are used to commission the gamer in exchange for rewards. Just as the boss fights at the end of the world deserve mention, few but good, also quite affordable but really well orchestrated, especially from the choreographic point of view.

In short, the whole is sufficiently dense, and remember that you can also experience the entire experience in co-op for up to four players, in local split screen as well as online - but only drawing from your own list of friends. The main enemy of production is repetitiveness of the tasks to be performed that those who do not digest the genre will probably end up feeling in the long run. However, we are faced with an attempt to enrich the basic formula which is by no means negligible, which we hope will be taken as a starting point for many other future productions. 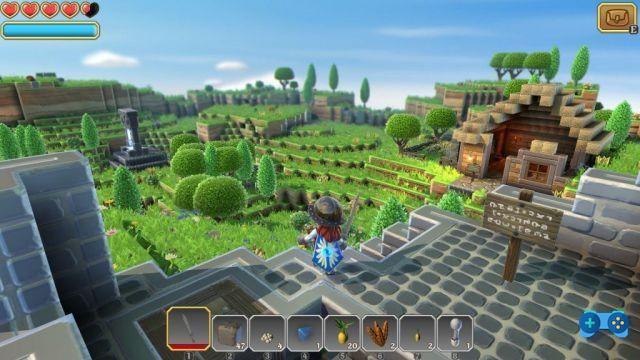 Do you want to complete all the achievements and trophies and know all the tricks, guides and secrets for your video games? SoulTricks.com is a group of video game fans who want to share the best tricks, secrets, guides and tips. We offer the best content to be a source of useful information, so here you can find guides, tricks, secrets and tips so you can enjoy your games to the fullest. Are you ready to get all the achievements of that game that you resist so much? Enter and enjoy your favorite video game to the fullest!
Creative Pebble V3 Review ❯