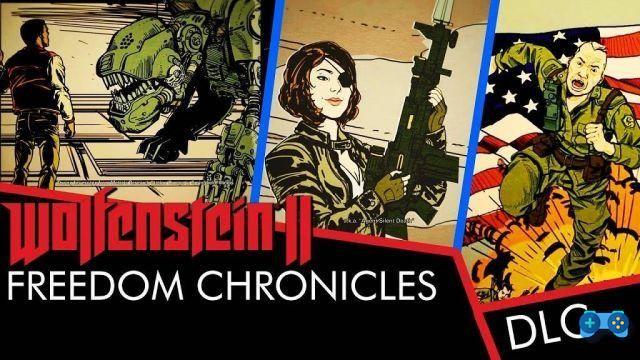 We return to exterminate Nazis.

Wolfenstein 2: The New Colossus is without a doubt the best shooter of last year. Bethesda has managed to offer a level product, thanks to a solid and convincing plot and simple but at the same time really fun “old school” gameplay mechanics. Wolfenstein 2 is now enriched with three unreleased DLCs, called "Chronicles of Freedom,", who will see us in the shoes of as many characters, Joseph Stallion, the former OSS agent Jessica Valiant and the Captain Gerald Wilkins. A triptych of characters united by a common purpose, to stop the ultimate weapon of the Nazis, the Cannon of the Sun!

Each of the DLC in question is divided into 3 short chapters, for a total of 9 acts. 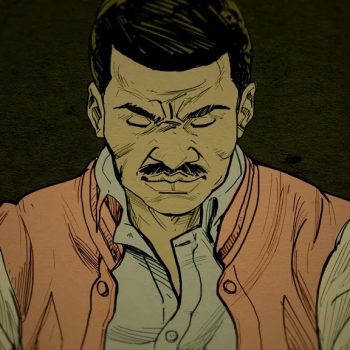 Let's start with the first DLC, released in December 2017, "The Adventures of Gunslinger Joe.“The expansion in question will put us in the shoes of a former Quarterback, Joseph Stallion. Rebelling against the will of the Reich to favor the victory in the final of a Nazi team at the Uberbowl, he is not sentenced to death but to serve a severe sentence in a maximum security prison. Thanks to a little help, he manages to escape from his cell, the target? Roderick Metze, a strangely familiar-looking dentist.


The peculiarity of each protagonist of the three DLCs is given by the fact that they have specific skills, the same that we have already had the opportunity to admire (and use) during the Main Quest as BJ Blazkowicz. Our former Quarterback being physically gifted, thanks to the "Power of Aries" it can literally tear down walls, smash crates, and throw enemies into walls. A brute and lethal force that will allow us not only to find alternative routes but also to exploit unique environmental opportunities. From a gameplay point of view, absolutely nothing changes compared to The New Colossus. The good Joe, will make his way slaughtering Krauts to no end (the part where we can ride a Panzerhund is very funny) and finding himself facing the final epilogue on Venus.

Everything proceeds in the name of continuity. Environments already seen, usual enemies, such as the Supersoldaten and the UberSoldat, some more difficult situation to face, given by the presence of the Commander and nothing more. In addition to the mighty physical strength, we will be able to count on our faithful mouths of fire. A powerful flare gun and some grenades have been added. The weapons can be upgraded by finding the related upgrade within the game scenario.

The magnificent cutscenes we got to enjoy in Wolfenstein 2: The New Colossus have inexplicably been replaced by American 30's comic style cutscenes. This choice, in qualitative terms, is really questionable. In fact, the comic cutscenes, in addition to trivializing the story, which certainly deserved more attention and deepening, turn out to be a bit ugly to look at and are all too static. Even the dubbing of the narrator, to tell the truth, is not exciting, being not very compelling and ending up being boring. A narrative plot that therefore seems an end in itself, never managing to take off, turning into a mere pretext for a few more hours of play. In fact, the duration is too short, about a couple of hours, which will increase if you look for every document and gold bar present. 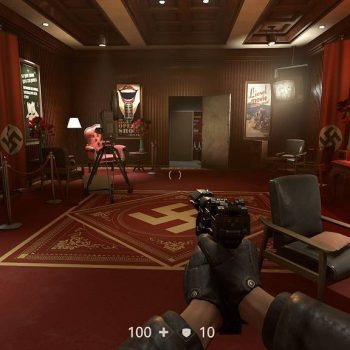 The second DLC, The Diaries of Agent Silent Death, was released last February. A lethal couple, Jessica and Jack, capable of silently exterminating hordes of Nazis. Unfortunately, not everything goes as hoped and Jessica will soon have to deal with the death of her beloved husband. Between alcohol and the pain of loss, our Jessica moves to Brazil. Rebuilding a life is not easy at all, especially if your husband has been snatched away from you and neither the reasons nor the executioners are known. But not everything comes to harm, some mysterious letters reveal to our former OSS agent, three names. Finally the beloved husband can be avenged.

Jessica, goes back to wearing the dress that suits her best, the uniform, holding the silenced gun and off, we return to the States. Also in this DLC, we have 3 mini acts, with a total duration of less than two hours of play.

It's not just about revenge

The targets that our former agent will have to kill are: Hans Stiglitz, specializing in torture; Chuck Lorentz, the actor who betrayed her husband Jack in exchange for a leading position behind the Reich propaganda machine; and finally Gerhardt Dunkel, the real instigator of the murder. Not being particularly gifted physically, Jessica Valiant, will have to rely on to his beloved silenced pistol, without however disdaining the use of machine guns and rifles in case of need, and his particular ability, that is to be able to compress the chest, using the Constrictor and pass through the ducts present in the game environments.


A solution that we have already seen in Wolfenstein 2, but here it offers some small additions to the gameplay. Sneaking out of the conduit, stabbing the unsuspecting enemy and perhaps returning to the conduit waiting for the next Nazi patrol is really priceless. Unfortunately there is a problem. The enemy AI does not seem suitable for a stealth approach. In fact, the soldiers will not try to track us down in any way, limiting themselves to "walking" near the conduit and giving us the opportunity to kill them with heavy weapons without any possibility of defending themselves. It would not have been difficult to give the soldiers the opportunity to throw grenades, or to avoid massing near the shaft.

Another usable skill is that of the "Bullet time, ”A short amount of time that we will have once discovered. For about a second, once the enemy has sighted us, we will have the opportunity to fire a shot and hide in some hole or simply to find shelter.

Short but not intense at all

Unfortunately, even in this case, the narration was left to comic-style cartoons. Narration that is practically absent. Too trivial that it is limited to a general "run, hide & gun". Not bad the final epilogue, but it is not enough to make us appreciate this DLC. Really a shame, as the character of Jessica Valiant had all the bases for a sure success and instead ends up being too obvious. Furthermore, the presence of different assets and reused scenarios do not place us in the position of being able to positively judge the work done by MachineGames. Perhaps there was no inspiration, who knows! 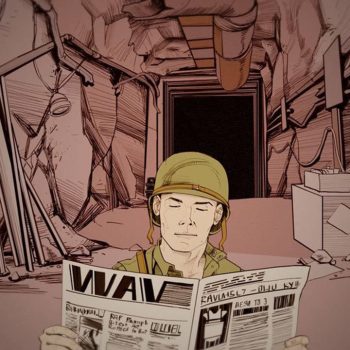 We have come to the end. The latest DLC, The Deeds of Captain Wilkins, included in the Chronicles of Freedom package and finally available. Bethesda and MachineGames' attempt to expand the Wolfenstein universe was not fully successful. In a discreet first episode, in the role of Gunslinger Joe, and subsequently, The Diaries of the Silent Death Agent. An episode, rather bland although at the base there was a good character. Unfortunately, even with the third and final DLC things do not improve, indeed. Perhaps The Deeds of Captain Wilkins manages to do worse than the previous ones.

The good Captain, even after the launch of the atomic bomb on New York, continued to do his part, in the extreme attempt to put an end to the Nazi regime. Called back into action, he will head to Alaska to dismantle yet another operation of the German war machine. Find the Sun Cannon, a devastating weapon. If Joseph Stallion uses Aries, Jessica Valiant the Constrictor, Captain Wilkins makes use of the extendable stilts (the bipod). In this episode, therefore, the verticality of the elements is preferred. Between jumps and approaches from above. Raising the alarm means facing numerous enemies. Always the usual is clear, including dogs, Commander, robotic units and so on.

They will hardly give us a hard time, as they will always try the usual approach. Weapons drawn and burst shots. If we are at the top, everything becomes even simpler. Just wait for an enemy to arrive and BOOM, we'll ship it right to the creator. The overall result is a half way between the first and second DLC. A mixture of action and stealth approach, also thanks to the silenced pistol. The large amount of armor and health, respectively 100 and 200 points, allows the good general to resist the enemy troops perfectly.

Here too, the usual comic cutscenes, lack of inventiveness in level design, which knows it has already been seen, and narration as an end in itself, leading us to an epilogue bordering on ridicule. In fact, it will be enough to press a button to conclude the unconvincing and unforgettable events of the Captain.

In conclusion, The Freedom Chronicles is a package that started badly and ended worse. We are well aware that expanding the Wolfenstein universe is not easy, but here we are faced with a real sop of mediocre quality. Nothing to do with the excellent stand alone package, The Old Blood, that was a top notch package. The purchase is not justifiable given the proposed contents, but if you are a fan of the brand and are dying to slaughter Bucks, take advantage of the present offer now and buy the Season Pass at half the original price.

Wolfenstein II: The New Colossus - The Freedom Chronicles
6.6 / 10 Soultricks.com
Available on PS4, XBOX One, PC
For

- Poor insight into the plot

- Reduced longevity to the bone

Summary
If expanding the Bethesda and MachineGames universe means offering a mediocre product, we are not there at all. The usual and convincing gameplay (which manages to make the package reach the sufficiency) unfortunately contrasts with a disarming scarcity of ideas. Narrative plot only sketchy, opponent AI deficient, skimpy duration and the senseless choice to replace the solid cutscenes of The New Colossus with comic-style vignettes. Hopefully Bethesda and MachineGames won't make any more missteps in the future. The cost of the Season Pass is not worth the price of the ticket, but if you really want to go back to slaughtering Nazis, take advantage of it now, the Season Pass is sold for half the original price!
gameplay
Graphics
Sonoro
Longevity
Final judgement
Anodyne 2 Review: Return to Dust ❯

add a comment of Wolfenstein II Review: The New Colossus - The Freedom Chronicles