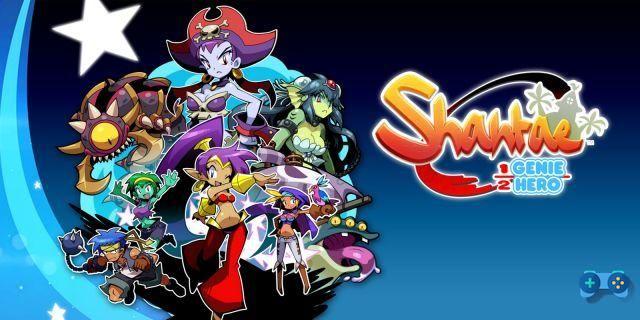 Shantae: Half-Genie Hero also lands on Nintendo Switch. Will WayForward have managed to impress both its loyalists and new users this time too?

Shantae: Half-Genie Hero was one of the most extraordinary titles for Wii U at the end of last year. In fact, he brought an excellent and wacky platforming adventure to Metroidvania that we believed to be arguably the best of the series Shantae. Given the pedigree of the game and the excellent relationship of WayForward us Nintendo, it just seemed a matter of when - not if - the game would be ported to switch.

Now that it's on the market, the question turns to the following: is it worth buying one more time? The answer is obviously a resounding "yes". Advance something: there is little, if any, that separates this version from its Wii U counterpart. If you are looking for any kind of updates or extras that weren't included in the original, you will be disappointed.

To all effects, Shantae: Half-Genie Hero on the Switch is exactly the same game that was on the Wii U. However, this time around, it has the advantage of being available in a portable format. 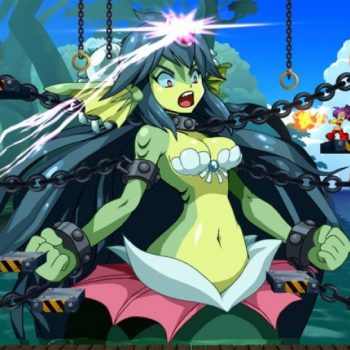 A lightweight genius for Switch hardware.

As always, this is something that must be experienced firsthand to be fully appreciated, but it certainly makes this version the most affordable.

Although it is a beautiful game in its own right, Shantae: Half-Genie Hero it was never one that pushed the limits of system hardware. As a result, there is no noticeable drop in performance or quality when playing on TV. In fact, the level-based structure probably makes it more suitable for games on the go.

Whichever way you choose to play, know that Shantae: Half-Genie Hero is an excellent choice for the Switch, and that the option to play on a big screen or on the go contributes greatly to its already high appeal. 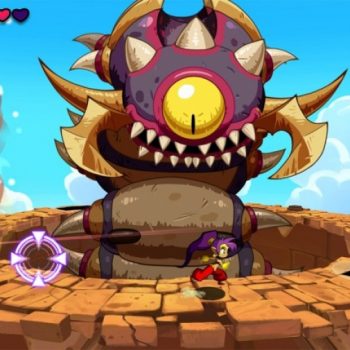 Shantae's World: Half-Genie Hero is a world bigger than it looks.

For those who have never played a Shantae game, this follows the standard Metroidvania format. In the same, a wider world is explored in search of new abilities and upgrades to improve the character; this is to be able to return to old areas and get other new skills and upgrades.

The difference here is that Shantae: Half-Genie Hero it breaks it down into a series of levels rather than an interconnected world. While some may cry in this slightly more linear setup, the same one actually allows for a much greater streamlining of the experience. It's much harder not to know where to go next, but that sense of discovery and mystery isn't lost. Some of the secrets are exceptionally well hidden, and will not be missing during the 10 hours of gameplay. 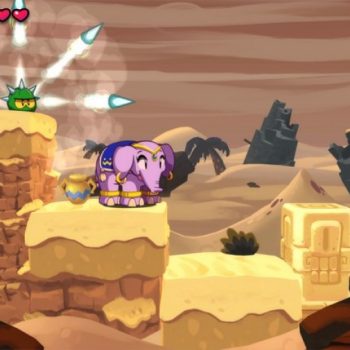 It's not enough just your beautiful hair to save your skin in this adventure!

Shantae's genius powers are back in full force, and there are about a dozen different forms she can take. Some of these are given as one progresses through the story and some of them must be discovered in the various levels; despite this, they all contribute in one way or another to help find more secrets and access areas that were previously inaccessible. However, some are more effective than others, and we even go so far as to say that some may seem absolutely useless.

The Monkey, for example, allows you to jump higher and outrun Shantae in human form, as well as allow you to climb walls. This is one that is used all the time, even in the basic platforming sections.

The Spider, on the other hand, allows Shantae to shoot a spider web which causes it to stick to the ceilings. It is one of those that is used in some puzzles and is quickly obscured when you get a skill that allows you to fly. In this sense, it would have been nice to see more transformations integrated into the main rhythm of the levels in a more organic way rather than just being the key to some puzzles; however, all are important, even if not equally. 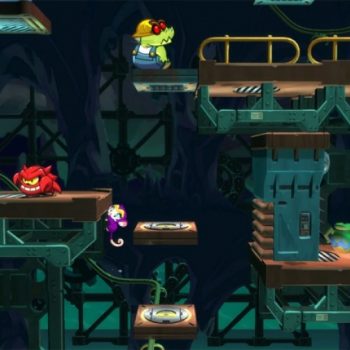 Shantae it also has a number of upgradeable skills that add an extra layer of RPG-style elements and progression. As you go through the levels - killing enemies and breaking pots - you often get a couple of gems, which can then be spent in Scuttle Town at a local shop.


Here you can purchase hair products that increase Shantae's damage output on her basic whip attack, new spells that offer her a range of offensive and defensive buffs, and consumables that restore health and / or magic with simple pressure. of a button.

These are very useful for empowering the player and giving him a satisfying sense of progression; however, the store's talents perhaps go a little too far when updating everything, making Shantae slightly over-powered. 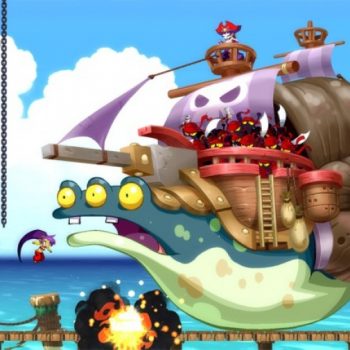 A Shantae armed to the teeth.

When it gets to the point that Shantae becomes an untouchable killing machine, the fun of the game is lost a little. Fortunately, the developers have thought of this, and you can choose to disable any updates like this in the pause menu, to make the game as easy or as difficult as you please.

The level designs are just as inventive and satisfying as ever, covering a wide range of environments, such as a magic carpet circuit or a mermaid-infested bay. Controls are as tight as ever in this series, if not tighter, and WayForward he clearly knows what he is doing when designing the platforming levels.

There are some interesting ideas that act in some way, such as the central themes of the levels. For example like a sandstorm that returns periodically that can knock Shantae into the pits. Or a factory that must be crossed by jumping between a series of loops that move quickly on the set tracks.

The dangers are almost always right, by properly testing the player's skills and not resorting to leaps of faith or cheap economic positions to introduce artificial "difficulties". When you miss a jump, and you will do it often, it is very likely that it is the player's fault. 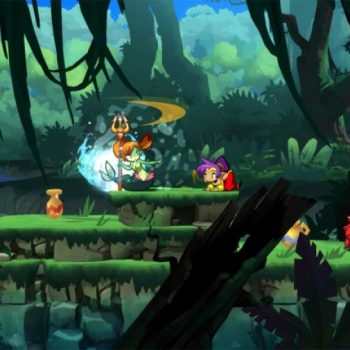 A great job from an artistic point of view.

The art style abandons the retro-themed look that the first three games were performed with, replacing it instead with classic models. DuckTales: Remastered of hand-drawn 2D characters set against a 3D background. The animations and expressions of all the characters are beautifully drawn and detailed; on the go, this could be mistaken at some points to be a Saturday morning cartoon.

While the wallpapers could perhaps use a slightly more visible touch, these use a range of different and rich colors that pop off the screen whether or not you are playing this game. You will probably find yourself using the capture button for a lot of scenes in this game; there are many moments when the artistic side is dominant. 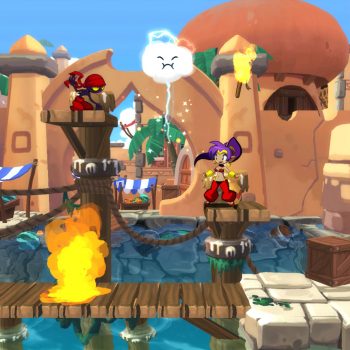 The soundtrack does a great job of completing the experience, providing a series of catchy, bouncy beats that add extra value to the package admirably. Without a doubt, there are some songs that will stay in the lead for hours after the game; Plus, the best part is that none of these are annoying or overly repetitive.

We definitely avoid playing this game on the sly, as the music adds a certain charge to the package that simply isn't there when played silently. Staying true to Shantae's dancing roots, the score generally has an oriental theme; nevertheless, the very varied sound is remarkable WayForward is able to draw from this model while remaining true to the theme.

Writing is another great addition to the experience, adding a new level of charm that transforms the world alive in a very special way. The tale never takes itself too seriously and often relies on humorous events to move things forward, such as when Rottytops sells a secret that could destroy the world for a bag of exotic coffee beans, or how a villain summons an eldritch monster. so that you can have the exclusive merchandising rights to it. The characters are usually written in a quick and witty way, and it helps keep the pace of the story in harmony with the upbeat nature of the graphics and gameplay.

With all that has been written, it seems like maybe WayForward it could have given us a slightly longer adventure than the present one. However, the “Hard Core Mode” helps add a little more replay value after scouring every corner of the map, despite the lingering sense of melancholy based on the fact that the game could have been longer than it is. Now, WayForward is working on a series of expansions and DLCs with other characters that promise to offer campaigns of the same relative length, but cost those who didn't initially donate to Kickstarter and aren't part of the base game anyway.

After all, Shantae: Half-Genie Hero has never looked better; the Switch's greater versatility gives the game a new kind of appeal and convenience that wasn't there before, and the first DLC expansion is scheduled for summer. This is a charming, colorful and sometimes challenging Metroidvania that will undoubtedly prove to be a memorable addition to your collection. While it might be a bit longer, we would recommend it to anyone who hasn't picked it up for yet Wii U or any other platform. For those of you who already have it, know that you are essentially only paying for the ability to play this title on the go, but it's still worth it. Either way, this is the coolest Shantae game so far.

- Best version of the title

Summary
Shantae: Half-Genie Hero it is a title that deserves to be played, offering light but captivating content at the same time that can keep you hooked for hours.
gameplay
Graphics
Sonoro
Longevity
Final judgement
Shenmue III, a fan makes an interesting video-doc ❯

add a comment of Shantae: Half-genie Hero, our review