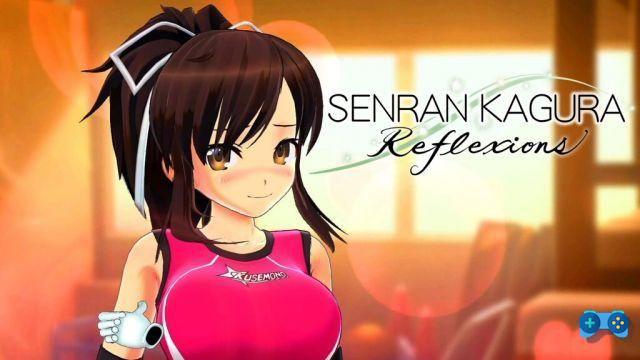 First title in the series for Nintendo Switch.

The Senran Kagura Series, after invading the Japanese land, also broke into the West and brought with it in its infinite versions the adventures of the busty kunoichi protagonists.

In this case it is not one of the canonical chapters of the series, in fact like Bon Appétit! it is a spin-off and like the other already mentioned it does not lack eccentricity.

The game starts with the young Asuka waiting for us, she explains to us that she feels strange, as if her heart is missing something and what to do to help her? I know that many will already have the answer in mind ... "fire", we will have to feel it in every part of the body.

Initially the kunoichi will give us her hands, from this point we will be able to admire the incredible work done by Nintendo with the famous HD Rumble, in fact when you touch the right points of the girl's hands, a cloud will appear that will lead to a fantasy of the protagonist, taken directly from typical Japanese “ecchi” situations.


In fact, we will be able to see Asuka impersonate a heroine of a fantasy video game, an inviting human gift box, a little sister in search of attention and an idol.

Once catapulted into these fantasies, the iconic "little hands" that only true fans of the series remember will appear, during this interlude we will have to commit ourselves to giving relief to the young kunoichi, touching her, stroking her and slapping her left and right.

We can also kick off the voyeuristic passions, turning the protagonist in every angle, or for no apparent reason, we can splash Asuka with jets of water (please don't ask me why).

In Senran Kagura Reflexions the main objective (yes there is one) is to obtain as many fragments of Asuka's heart as possible, you will be able to succeed in the enterprise by concluding the phases of palpation and massage of the protagonist.

Once the heart of the kunoichi is completed, you will be able to see the final cutscene, which will explain to us why Asuka behaves like this.

Yes, there are three other game modes, better defined as mini-games, here are what they are:

Despite the simplicity of the title in question, the animations are very similar to those of the major games on PS4, it is certain that the preponderance of textual phases allows for greater graphic detail.


The audio instead collects some of the most iconic music of the series, we still recommend headphones, the neighbors hearing some noises could get strange ideas ...

DLC, all the other Ninja are coming

In Japan, the DLCs that include Yumi, Murasaki, Ryona and Yomi have already been released, the price to continue playing with them will be around 10 euros.

- Senran Kagura's soul is not distorted

Summary
Senran Kagura Reflexions is a title with a marked Japanese mentality, which finds little outlet in our land. If we then put the total absence of plot and gameplay without rhyme or reason, we soon understand that it is a mere "filler" using anime terms, waiting for the main game (Burst Re: Newal). I only have one word left to conclude this rece: OPPAI !!!
gameplay
Graphics
Sonoro
Longevity
Final judgement
Sniper Ghost Warrior Contracts 2: new release date and gameplay video ❯

add a comment of Senran Kagura Reflexions - our review