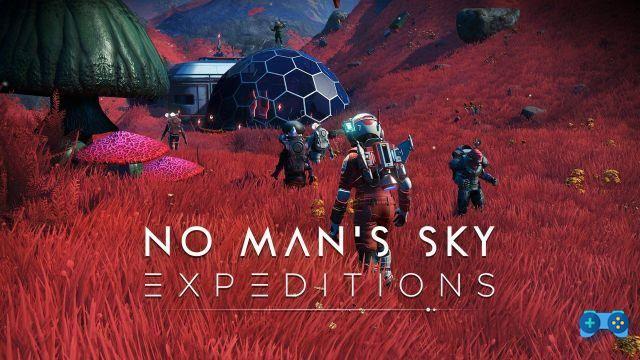 Hello Games made the update available yesterday Expeditions to No Man's Sky. It is a free update which introduces a new mode e several improvements both graphically and programmatically.

The most important element of the new update is also what gives the title to the new expansion: Expeditions mode. It's about a multiplayer mode which will allow a substantial number of players to embark on a common enterprise starting all from the same planet: from there, it will be a question of following a traced path, completing a series of linked objectives and earning new and interesting rewards. These include special "honors", introduced specifically for this content.

The mode Expeditions provides for missions and operations always different, which will require players to collaborate like never before, its No Man'Sky. Furthermore, it is a content that Hello Games undertakes to update on a seasonal basis, thus always guaranteeing new life to prevent everything from falling into repetitiveness and habit.

In addition to the new mode, the update Expeditions introduces graphic enhancements, including the game interface in 4k and a revised mode of scan through the viewer. To this is added a full-bodied fix patch some known issues. On the Official site you can find a complete list of the improvements made.


About No Man's Sky

Since its somewhat troubled launch, in 2016, No Man's Sky he has come a long way. After being subject to two major net transformation updates, "Next"And"Beyond“, The game has never stopped receiving support and updates also taking into account the community feedback, to the point of receiving the award as "Best Ongoing Game" ai The Game Awards 2020.

We all know how difficult it is today for a software house to maintain and support post-launch a game with a multiplayer component preventing players from losing interest. No Man's Sky, moreover, due to its peculiar structure centered onscouting discovery, is a game that continually needs to new contents to keep the player's attention high.

The last significant update was out in February, introducing the pet and modernizing the dynamics of interaction with creatures native of the explored planets. But also the mechs, the organic spacecraft e the upgrade of the spaceship inside the space stations have been significant steps forward, which demonstrate the care and commitment that Hello Games he is continuing to put into cultivating his own creature.

Do you want to complete all the achievements and trophies and know all the tricks, guides and secrets for your video games? SoulTricks.com is a group of video game fans who want to share the best tricks, secrets, guides and tips. We offer the best content to be a source of useful information, so here you can find guides, tricks, secrets and tips so you can enjoy your games to the fullest. Are you ready to get all the achievements of that game that you resist so much? Enter and enjoy your favorite video game to the fullest!
FIFA 19 - FUT Ultimate Team, advice on TOTYs and on buying and selling ❯

FIFA 20, everything you need to know about the Web App

The Protagonists of Cyberpunk 2077: Adam Smasher

Dark Souls 3, trailer for the Ashes of Ariandel DLC

Add a comment from No Man's Sky, "Expeditions" update available