FIFA 19 - FUT Ultimate Team, advice on TOTYs and on buying and selling 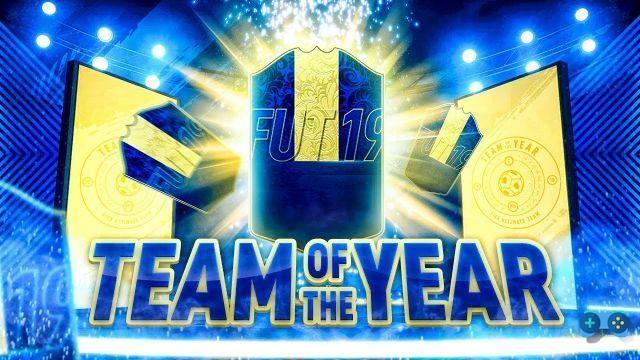 The most anticipated team of the year.

Here we are, the Team of the Year is coming. For the second consecutive year, the Team of the Year will be voted on by selected journalists, athletes, partners and members of the FIFA. The collective of voters was chosen to represent millions of players of FUT- Ultimate Team worldwide. Each team will be chosen from a list of 55 players, nominated by EA SPORTS for their respective performances in 2018. Custom ballot boxes, containing the 55 nominated player items, were given to each voter. Each vote will consist of three forwards, three midfielders, four defenders and a goalkeeper in the classic 4-3-3 form. Each voter will express their preferences by posting a photo of their team with the hashtag by 7 January #TOTYVote on social networks. The weight of the vote of the lucky ones chosen will be 60% on the final vote, while the EA will have 40% of decision-making power to change the choices of the community.

Here is the article with our predictions on the TOTY team:

The #TOTY Ballot Boxes have been sent out, the 11 winners will be revealed January 7! #TOTYVote #FUT # FIFA19 pic.twitter.com/4Q5kJDfd8U

Investing is risky but not impossible. In anticipation of the release of the Team of the Year, many players have started to keep their Packs. For this reason, the majority of them will open the packs with the launch of the TOTY in the hope of finding one of the fantastic players who will enter. be part of the team. This will result in a huge market placement of NIF and IF cards of the current TOTW (number 16). Consequently, prices will drop significantly.

Investment in IFs, what to do?

Investing in the current Team of the Week is not recommended. The market with the launch of the TOTY team will have significant and difficult to predict fluctuations. It must be considered that this event is the most profitable for EA Sports and in all likelihood, special packs of 50.000, 100.000 and 125.000 will be released. Any SBCs (if guaranteed, championship updates and SBC Icons) could be inserted to balance the drop in prices due to the many Promo Packs that are likely to be there. The advantage of lowering prices lies in the fact that it is an excellent opportunity to buy players belonging to the previous TOTWs.

Particularly the players who most could suffer a decrease are those who have obtained the IF card during the various events held starting from the month of November onwards: Black Friday and Futmas. Several players still have piles full of IFs belonging to the TOTWs of November and December and the lack of really significant challenges forced them to wait before they could sell them. With the arrival of TOTYs and the onset of compulsive unpacking, many of these IFs will be offered for sale at low prices with the aim of obtaining immediate and spendable credits in the store. So if you find any TOTW IFs passed at a scrap price or almost, buy it without thinking twice. In doing so, as long as you have a little patience considering that the next important event will be that of Ones To Watch winter, you could get a good profit from the sale.

This year, the investment in cards with an overall 83/84 + did not give the expected results. EA has been very skilled in minimizing the possibility for users to make a profit from the sale of these cards. The only real earning potential with these cards came with Flashback challenges and partially in those Icon. All in all, considering that they remain on rather low prices, with the launch of the TOTYs, the prices will drop even more. If you have a lot of credits to invest, maybe you could dare and buy several cards with 83/84 + rating. Invest in different players, no more than 6/7 cards per player. Also take into account nationality, club and league.

Also remember that players who join the TOTY team for a period of time will not be found in the packs in the NIF version. The prices of these players will therefore have a significant increase which could generate a slight profit.

One of the investments that could pay off so much and turn out to be a sensational flop is that of cards UCL Live. These cards, which will be updated in case of passing of the turn of the relative team to which the player belongs, have a very high potential. The risk is very high in the short term but in the medium / long term, starting from February onwards, they should generate profits.

The advice is to buy them only if you have a lot of credits and above all at affordable prices. To give some examples, Renato Sanches and Kondogbia have lowered by several thousand credits, about 30k. Maybe keeping an eye on the market constantly, you could buy them at an advantageous price and think of a hypothetical resale.


NB What is written is the result of personal interpretations and past experience. The best way to do good business is to always keep an eye on the market and its dynamics.

Apply for the Team of the Year:

Winners will be announced on January 7th!

[Update] - Team of the Year revealed

In attack the absolute protagonist of Serie A Cristiano Ronaldo and the ace blaugrana Leo Messi flanked by French talent Mbappe.

It starts with the forwards. The trio of wonders will be available in packs starting at 18pm UK time (19pm).

add a comment of FIFA 19 - FUT Ultimate Team, advice on TOTYs and on buying and selling