Twenty-eight years ago a new band was born, a band that still gives fantastic emotions in each of its performances. We are obviously talking about the famous Metallica group, made up of four great artists: James Hetfield, Lars Ulrich, Kirk Hammet and Robert Trujillo. The fame obtained in almost thirty years of career has thus pushed Activision to make Metallica a real video game and therefore to follow what it had done some time before with Aerosmith.

Guitar Hero Metallica was released a few months after Guitar Hero World Tour, in which the two big news were represented by the inclusion of the use of the battery and the microphone. Unlike Guitar Hero Aerosmith, this new game is characterized precisely in the fact that, reliving the live historians of the band, we will impersonate each component, relying on all four tools available. 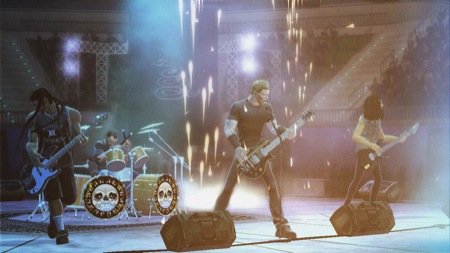 Once we enter the world of Guitar Hero Metallica and have seen the short introductory story in the form of a comic, we will be greeted in the main menu from which we can glimpse the usual game modes: Career, Quick Match, Head to Head, Music Studio, Xbox Live and Backstage. Let's start from the career: once this option has been selected, we have to choose the instrument to be exhibited and the difficulty that will constitute our performances; it will then be necessary to create your own character using the same editor appeared in GH: WT. Once all that has been requested has been done, we are so ready to dive on stage, aware of the fact that the audience is very hot and that any mistake could be fatal. But not before having witnessed one of the funny cartoons that Metallica and their manager must be the protagonists: all in the form of comics. 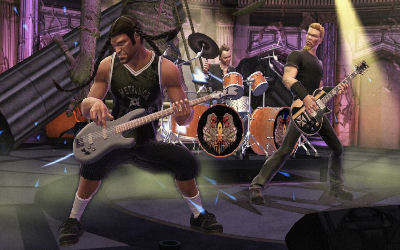 This time the selection of songs is done differently than in the previous episode: if before you tried your hand at a single concert gradually unlocking others, this time we will start with a couple of tracks available where, by accumulating a certain amount of stars (due to the increase in the score during the performance), we will unlock another concert and consequently other songs, even without the need to finish the whole series of songs of a concert.
After selecting the song and taking the stage in front of thousands of spectators, it's time to play. The game formula is almost unchanged: once again we will have our score in motion in the center of the screen on which the notes of the song will scroll. The more notes we play correctly, the more the score will rise and in fact also the number of stars already mentioned. If, on the other hand, the song turns out to be more difficult than we thought, we will always have to take a look at the rockometer, which will mark if our performance is further heating up the crowd or if it is definitely going badly. In the latter case, the score will flash red and if we continue to make a mistake in the choice of notes, the performance will fail, unless we have the typical Star Power available which will double the points multiplier and raise the situation. at least for a while. Acclaimed by the public and satisfied with our performance, we will return behind the scenes where we will collect some money which will be useful to buy clothes and accessories for our instruments from the special shop. 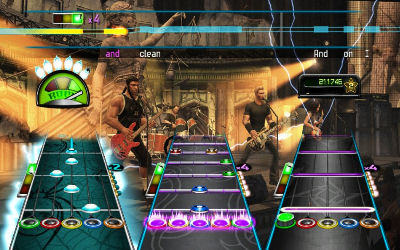 But the real news does not concern so much the guitar, whose scores have been improved and studied to the millimeter, as the drums, which presents a new level of difficulty and an unprecedented modality. For those who are always looking for new challenges, and we would add us for real drummers, Neversoft has in fact added the difficulty Expert + (available only in some songs), due to the decision of the developers to allow the use of a second pedal, exclusively for the battery of the Guitar Hero brand. The second novelty is instead represented by the modality Drum Over, with which it will be possible to play the instrument to your liking following the normal basis of the piece. 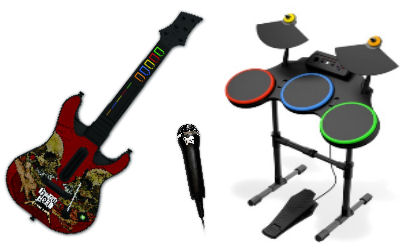 As happened for Guitar Hero Aerosmith, also this time Neversoft has delighted the most avid fans of the band, grouping videos, texts and curiosities in the section Backstage where even the youngest can get a "culture" on Hetfield & co.
Interesting is the modality Metallifacts where, after selecting a song, the digital concert of the group will be shown while news regarding the song or album to which it belongs will scroll.

As for the Music Studio, even in Guitar Hero Metallica it will be possible to become a composer for a day and then create the song that has been buzzing in your head for some time but that still no artist has had the misfortune to play. Through an excellent tutorial, which will explain the foundations of the editor up to the far more complicated commands and settings, we will be able to begin to write down our score for solo guitar, rhythm and keyboard, perhaps relying on already packaged bases of bass and drums. . All then opting for a multitude of assorted effects with which to customize your song. Once satisfied with your work, we will be able to publish our work in the extensive GH Tunes service, where in addition to sharing their songs, we will be able to download those of other users to which, at the end of the performance, it will be possible to vote.
Worth noting is the possibility of importing from the songs already created, but the inability to play downloadable content purchased from the Guitar Hero World Tour marketplace. 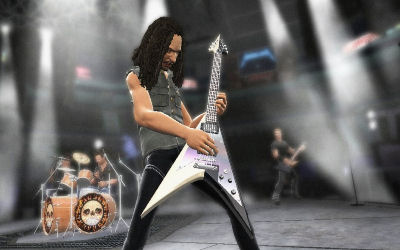 As for the sound sector of the game, the tracklist turns out to be spot on and in addition to presenting 28 songs by Metallica, it offers a further 21 songs chosen by the band, for a total of 49. Here is the whole list:

Against, the graphic sector turns out to be almost the same as the Guitar Hero World Tour. The polygonal models and textures are in fact the same used for the previous episode. To mention, however, are the arenas in which our performances will take place and where Metallica really played; however, there will also be those created, such as a stage entirely taken from the album Master of Puppets. The motion capture sessions to which the four artists underwent, however, brought several fruits: the general atmosphere is in fact enriched by the classic movements of the Four Horsemen, like Ulrich's standing or Hammett's guitar tilt; all this contributes to increasing the dose of realism of the experience. 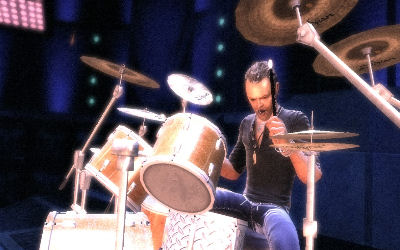 Guitar Hero Metallica turns out to be a game curated from almost every point of view. The lineup could in fact boast more songs by the band itself, but still manages to give a lot of fun both in single and offline. However, the experience could prove to be all too similar to those of the other Guitar Heroes to those who do not have the drums, since the only two novelties have been reserved for the percussion instrument. The overall impression is still good and for those who would follow Metallica all the way to Guatemala, well, it will undoubtedly be fantastic to play Hammett in his spectacular riffs or Ulrich in his demanding drum laps!