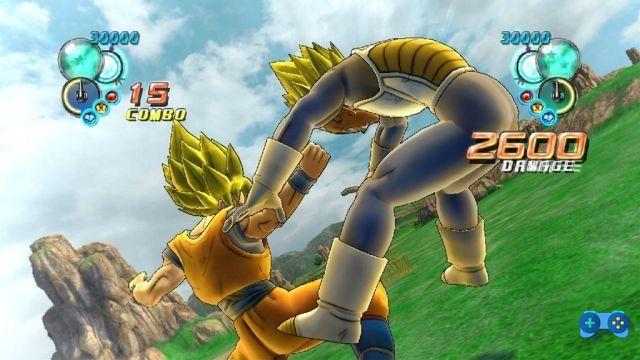 Spike and Namco Bandai take us back to the Dragon Ball universe once again.

Dragon Ball is one of the most followed and loved animated series in the world by several generations of boys and girls and it is therefore normal that its license is used annually to produce non-stop tie-ins.

For over 15 years this license has been exploited and this has made, in recent years, the task of developers more and more difficult, as they find in their hands such an exploited source where it is increasingly difficult to insert something new or modify to make the different product from the previous one.

Here, after already three fighting games released in this generation of consoles, Spike's guys propose a fourth one, this time however trying to give all fans a new and fun video game, but will they succeed?

Between past and present

After having beaten more or less alternative paths with the previous titles, the team Spike has seen well to finally listen to fans of the series and this time opting for a setting that is completely "almost" similar to that used and successfully implemented in the series Budokai Tenkaichi.

Except for some slightly different narrative licenses (just see the prologue in the role of Bardock) and for the presence of some characters seen in the spin off Dragon Ball GT and of the numerous OAV published over the years, even on this occasion the main mode on the single player front remains the option Story, which will allow the player to retrace the entire adventure of the saga "Z”In the role of each of the main characters of the series, chosen from time to time by the CPU naturally following the evolution of the plot.

As it happened in the series Tenkaichi view up Playstation 2, thanks to a hybrid game system halfway between a classic fighting game and an elementary RPG, even on this occasion the player will be required to affect the outcome of each single fight, but also to manage a component free roaming which will see the player looking for the seven dragon balls.

For those who love absolute novelties, there is also an unprecedented modality called Hero mode, capable of further expanding the elementary RPG aspect that is offered by the game. In this mode it is offered the possibility to create your own ideal PG starting practically from scratch (the editor quite poor of options, will allow you to mix most of the characteristics of the characters included in the game), and to guide him along a new path that will see you catapulted into a dimension parallel to the one you will experience with the main story.
This mode has not been developed with much depth and after a few hours, it will be quite uninteresting, resulting poor in content and a real plot that can make the player interested in living an extra experience to the now classic one of the main story.

Between Chinese morra and QTE

The Spike team had always said it: “expect a game with innovative gameplay, capable of offering the same fury of the fights seen in the anime”.

Indeed, if we analyze the title under the magnifying glass, from this point of view Dragon Ball Ultimate Tenkaichi has the merit of proposing a game system with a sure visual impact, immersing the player in combat thanks to a system of framing, speed of ' action, special effects.

Too bad that all this visual quality is practically useless when coupled with a combat system that is nothing short of disappointing and unable to make a fight interesting! The fighting sessions, the core of the title, alternate introductory cut-scenes with Quick Time Event sessions to the classic Chinese morra game "Paper, Scissors, Rock".

The control system is undoubtedly simplified to say the least, with pads in hand with two keys out of four dedicated to action and two keys dedicated to dodging and shooting. The entire combat, activated by the clash by means of an action key, is managed automatically by the CPU, which according to the distance, health, aura possessed and the key pressed, will perform various actions on the screen, leaving the player to do the spectator who will only have to intervene by promptly pressing one of the two action keys when they appear on the screen.

So forget combinations that are impossible to keep in mind, or keystrokes to memorize during long combat sessions. In Dragon Ball Z Ultimate Tenkaichi, to get the better of your opponent on duty, you simply have to press the screen button at the appropriate time in the QTE phases, nothing more.

Feast for the eyes!

The technical aspect of the game does not differ much from the classic cel shading used for most of these productions in this generation of consoles and in particular the graphic level is very close to that seen in Dragon Ball: Raging Blast 2, without improvements. evident.

Basically we will end up with well-characterized characters and truly remarkable details, such as sweat, clothes that deteriorate, which go a lot in contrast with the scenarios of the combat arenas. Too bad, however, for the few details of the levels: the destructibility is unfortunately only very minimal superficial and active only on certain objects, with a Kemehameha launched by a Super Saiyan, one would expect that the planet will be destroyed too, and instead not even the arena of game.

To the graphics almost similar to the previous title released last year, with the inclusion of animated sequences and TV acronyms, it was not at all successful in the intent to recreate the typical atmosphere of the anime or to give a certain epicity to the most important clashes of the saga that we all know.

The music and the Japanese vocal samples are always of a high level, but they certainly cannot immerse us in the world of maestro Toriyama by themselves. Spike's guys have not focused at all on improving the previous works, but have simply limited themselves to a simplification in the game system that takes this Dragon Ball Z: Ultimate Tenkaichi far from the classic fighting game we all know.

Although, as already mentioned at the beginning of the article, the license has been exploited to the maximum, a more accurate work would have been preferable, at least being able to recreate the typical atmospheres of the fights of the saga and not a succession of cut-scenes stuffed with QTE that give the title the style of a Chinese blackberry game, giving the player the feeling that he will never have control of the fight as the clashes will all take place by pressing two keys in the QTEs. It would be useless to comment on the inclusion of the Hero mode, really of little importance and made with too much superficiality, making us regret the modes present in the Ragin Blast series.

The tie-ins dedicated to Goku and co. there have been many and many others will surely be produced over the years, but it seems so difficult to be able to accept increasingly simple and "guided" gameplay systems that make the whole game experience poorly interesting.

Spike's new work is recommended only to all fans of the series who cannot help but experience the most historic battles they have seen in the animated TV series, but not to all those who are looking for a fresh and varied product, as this new chapter is repetitive to boredom and with uninvolving fights, undermined by a technical realization identical to Dragon Ball: Raging Blast 2 and by a very low level of difficulty. Dragon Ball Z: Ultimate Tenkaichi is the classic annual tie-in, packed with too much haste and superficiality, where the most demanding fans undoubtedly would prefer to wait to receive a title as it should. To save the entire production from rejection, the graphics sector will think about it made in a more than good way and an above average longevity, but will they be enough to make the title interesting?

- The worst tie-in to appear on next-gen consoles

The title is available from October 27 on the Playstation 3, Xbox 360 platform.

Do you want to complete all the achievements and trophies and know all the tricks, guides and secrets for your video games? SoulTricks.com is a group of video game fans who want to share the best tricks, secrets, guides and tips. We offer the best content to be a source of useful information, so here you can find guides, tricks, secrets and tips so you can enjoy your games to the fullest. Are you ready to get all the achievements of that game that you resist so much? Enter and enjoy your favorite video game to the fullest!
Mario Kart, the 10 most beautiful circuits ever ❯

The Dark Pictures - Man of Medan, the review