Han Solo fans, are you ready?

Will we ever get enough of space, aliens and spaceship wars? Probably not, and the arrival, in a few weeks, of the film of films, that "Star Wars: The Force Awakens", awaited by many and feared by many, it has done nothing but rekindle our desire to explore galaxies "far, far away".
The first work of Double Damage Games, small team separated from the software house Runic, already author of Torchlight, is an interesting RPG completely set in a procedural generation space able to intrigue the Star Wars fans we were talking about before, but also those of Star Trek, Battlestar Galactica and company singing: we are talking about Rebel Galaxy.

Looking for our aunt

The title allows us, right from the start, to follow a campaign mode that will gradually allow us to acquire the rudiments of the game, or throw ourselves directly into the fray to try to follow our personal ambition as interstellar miners, bounty hunters, or pirates, aware that they have no credit or upgrade available and, therefore, that they are easy prey for enemy ships. The story of the game however centers on the search for a called aunt Juno and through the main mission we will have the opportunity to really deepen very little of the game plot especially due to a variety of dialogues with the very thin npc.


Journey among the stars

Much of Rebel Galaxy's playful offer is concentrated in the combat phases, a mixture of frenetic action seasoned with a pinch of tactics, the latter deriving above all from the vast armamentarium available and the need to carefully study the customization of our astronane. At the beginning of the game a very short tutorial will allow us to get acquainted with the functionality of our spaceship and, even if the game recommends controllers, the title can be played safely via mouse and keyboard. The ship's customization system plays a key role in the game economy. You can choose the positions of weapons or shields as well as having the possibility to buy other ship models as you have completed missions and collected credits, for example through piracy or the collection of minerals. As for the displacements, it is possible to use the engines with the 4 available speeds, in addition to the turbo and warp mode. This last element is one of the most entertaining elements of the combat system, in fact the correct position of our spaceship with respect to the position of the enemy ships, can determine a victory or a sound defeat. We will therefore have to aim the shields at enemy fire, know when to move or activate the shields, in short, we will have full control of our ship and the turrets installed on it, and this entertains for many hours in the game. Furthermore, the management of all the available paraphernalia can be entrusted to the members of our crew, thanks to a rather convincing AI. You will also have to manage all the chores of a spaceship, such as faction reports, go in search of minerals and the right places to resell them to get the best price. In fact, each product changes in price from day to day and can also be influenced by your behavior, for example by attacking the supplies of a certain mineral, it will cause an increase in the price and so on. Each map is represented by at least 12 systems, each of them connected by space-time gates that allow us to travel from one system to another. Each system is obviously faction-dominated and we will not always be welcomed, however all or almost all battles can be avoided, which leaves the player free to choose in the game what they want to do. The missions of the main quest are actually not particularly interesting, being reduced to a simple execution of a particular order such as "destroy all enemy spaceships in quadrant xx" but they will be necessary to continue in the expansion and enhancement of our spaceship. The degree of spectacularity of some great space battles is, however, truly memorable, so much so that we are sure that "the way of the pirate" will certainly be a favorite among players. 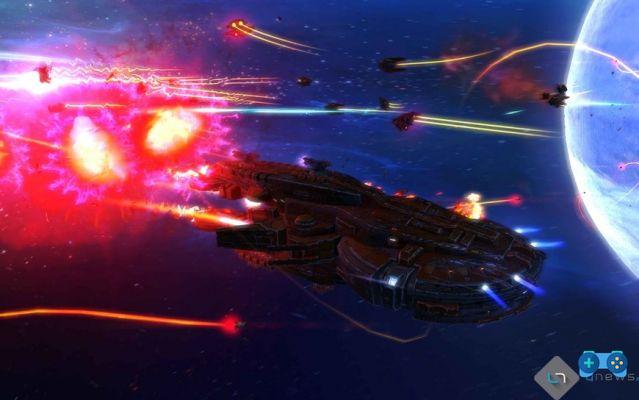 The title looks very good graphically, even if some animations really leave something to be desired. The soundtrack varies depending on the situation, but is generally kept on a country-folk basis, similar to Borderlands. The sound effects are very good, which makes the title very interesting from a musical point of view. The environment is always rich in elements and details, despite being set in space; in fact there will never be intense battles between one quest and another or wandering asteroids or stations to plunder, in addition to the fantastic settings, of planets and nebulae.

Do you want to complete all the achievements and trophies and know all the tricks, guides and secrets for your video games? SoulTricks.com is a group of video game fans who want to share the best tricks, secrets, guides and tips. We offer the best content to be a source of useful information, so here you can find guides, tricks, secrets and tips so you can enjoy your games to the fullest. Are you ready to get all the achievements of that game that you resist so much? Enter and enjoy your favorite video game to the fullest!
I have. Mobile changes serial to customers who have suffered theft ❯

One Piece: World Seeker, our review