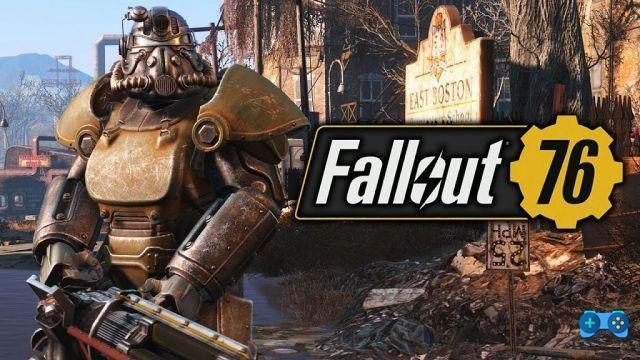 A title that made people discuss ...

Fallout 76 is the new title in Bethesda's successful post-apocalyptic series. This review comes with a bit of delay, as some games cannot be dealt with in a hurry, as they must be carefully evaluated and explored to find strengths and weaknesses.

Fallout is one of those brands with the unique ability to create hype and hate at the same time at its fanbase, often used to evaluating the game without even putting a hand in it.

Some news has made many turn up their noses, starting from the fact that it is an essentially online title up to the lack of human NPCs with which to engage in some pleasant chat.

We could not fail to insert this iconic phrase of the brand, this time we will have to interpret one of the survivors of Vault 76, who 25 years after the nuclear holocaust (the basis of the plot of the whole series) is asked to return to the surface and recolonize the Earth.

Fallout 76 is in fact a real prequel within the narrative universe of Fallout. There are no traces of other Vaults on American soil, making us de facto pioneers, with all the challenges that can come with it.


The game editor is quite primitive and the Vault that hosts us is almost totally deserted, as soon as we go out we notice an even greater desolation, almost disarming. What is our task? We will have to follow in the footsteps of the Superintendent and his journey up and down Appalachia, trying to understand what is the motivation that led to the almost complete extermination of the human race.

Our path is marked by a series of main missions, further subdivided into sub-quests, which in turn will turn into tasks requested by robots, terminals or by the Superintendent (every time I write it I am reminded of little Ralph Winchester and his SupraNintendo Chalmers).

We arrive at one of the most critical points of the title: the lack of human NPCs, the latter factor despite some complaints is more than legitimate, depends on the fact that the story takes place a few years after the so-called "nuclear holocaust", so it is justifiable the greater presence of robots that have "duplicated" many of human behaviors. Of course, the fact remains that if you don't talk to anyone for a long time, you can start talking to volleyballs named Wilson to avoid the madness that comes with loneliness.

The story of this Fallout remains interesting, however, as it will lead us to understand what is the cause of our almost complete destruction. The interest of the plot could be overshadowed given the high degree of repetition of some dynamics, which are specially prepared to let us explore the huge map of Appalachia.


The arduous search for the truth behind the birth of the Burning Beasts, nightmares of many players in the series, can be fascinating both alone and in company, but in both cases it is not an experience without defects.

The huge amount of holotape files is a real nightmare if you are facing an online session, in fact, in order to better listen to the content you will be forced to isolate yourself from the group chat.

The plot, on the other hand, maintains a prominent aspect in this episode of the series, bitingly surpassing that of the fourth chapter, trust us if we tell you that there will be surprising moments that will excite you particularly. The side quests in some moments will lead you to careful reflections on human nature, so powerful that it puts one's existence at risk.

This little analysis allows us to say that the story of Fallout 76 is one of the most successful aspects of the game.

Life in the Vault wasn't all that bad, but if you want to get into the history books, you'll have to get your hands dirty. In fact, all of a sudden you will find yourself facing radioactive animals, ghouls and absurd mutant beasts and anything else born of that monstrous "nuclear holocaust". Fortunately, you will have an almost infinite amount of weapons with which to sweep any of these creatures from the planet, ranging from modern rifles to weapons of an evidently alien nature.

As soon as you have to deal with the shooting system of the game, the satisfaction will drop dramatically, in fact it replicates the old system that Bethesda has been using for some time in its titles and which now borders on frustration. Similar speech could be made for the wear of weapons, in some cases it is too fast.


The management of armor is quite similar to the previous episodes of the series, the addition of specific perks for each of them is interesting, but once you unlock valuable pieces, the demand for materials will become particularly exorbitant, forcing you to wear less powerful pieces, the all while searching for hours for a piece of duct tape.

Let's talk about constructions, even the management of the latter has taken full advantage of the previous titles (Fallout 4), and once again it is not particularly convincing, as it does not lead us to build a real base, but rather leads the player to place the important elements here and there, while the rest is left aside waiting for better times.

The game has an almost schizophrenic nature, an aspect that distinguishes almost all the elements within, such as the character growth system. At each level increase the game will give you skill points, the latter can be spent on a SPECIAL feature, then with the cards you can also take advantage of some active or passive perks.

Every now and then the game will give you a package containing four cards, inside it will be possible to find various types of skills. You can also merge the double cards in order to increase their level.

Another negative and anachronistic factor is that linked to the characteristic points, in fact after you have spent them you will not be able to rethink and change the distribution. So use them wisely.

Survival? Yes, but not too much

Fallout 76 limits its survival to a few mechanics such as: eating, drinking and crafting, always remaining too generic and turning into mechanical actions in order not to lose energy and the ability to run.

The game world is full ... of things to do

Despite the downsides, Fallout 76 will manage to make you spend many hours of gameplay in front of the TV quietly, the main campaign will keep you busy for about 30 hours, but it's the secondary activities that will keep you for much longer.

In some cases you will get to the point of giving up everything, completing all the secondary activities may seem prohibitive, as they are divided into sub-quests and other tasks.

Online section to be reviewed

Although the game was born with the aim of seeing us collaborate, it presents various critical issues in the aspect that should instead be the strong point. The impossibility of sharing the quests is perhaps the element that leaves more perplexity. Different speech applies to raids and public events, which allow all 30 players to share this moment together. These last two modes are also particularly fun and addicting.

The PVP is the most negative aspect of this game based on online multiplayer, the competitiveness is almost absent and it is totally useless for the purpose of the game. Bethesda, however, has kept to specify that events dedicated to this mode will arrive soon.

Technical aspect… let's move on to something else

This aspect is what has made virtually everyone turn up their faces, noses and eyebrows. Bethesda's graphics engine (Creation Engine) is now too dated and only the software house seems not to be aware of it yet. Shadows and animations are totally to be forgotten, to seem almost an independent title. Glitches and bugs lurk practically everywhere creating situations that are between the embarrassing and the hilarious.

- Lots of stuff to do

Summary
Fallout 76 is a two-sided game, alternating a plot of great interest to a cumbersome and dated gameplay. The online multiplayer which is an integral mechanism of the game has a merely marginal aspect. We sincerely hope that the US software house can learn from these errors and pull the chapter that we all await out of the hat.
gameplay
Graphics
Sonoro
Longevity
Final judgement
Do you want to complete all the achievements and trophies and know all the tricks, guides and secrets for your video games? SoulTricks.com is a group of video game fans who want to share the best tricks, secrets, guides and tips. We offer the best content to be a source of useful information, so here you can find guides, tricks, secrets and tips so you can enjoy your games to the fullest. Are you ready to get all the achievements of that game that you resist so much? Enter and enjoy your favorite video game to the fullest!
The Witcher: a look into the world of Geralt, beyond the Netflix series ❯