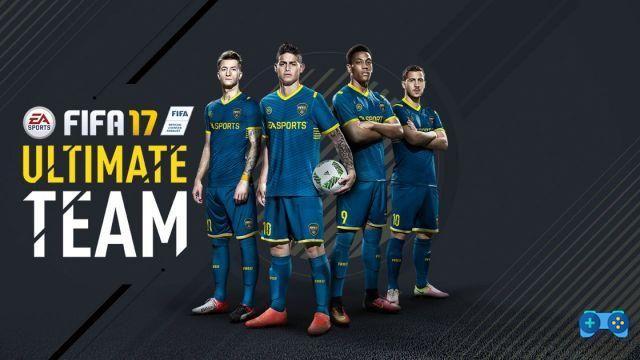 To become number one.

The mode Ultimate Team (FUT) Series FIFA, certainly represents the most popular mode and the one to which the greatest number of fans of the title branded Electronic Arts, decide to dedicate themselves, starting from the weeks before the release of the game, also thanks to the inevitable Web App available on the official website and on mobile.

The goal is very simple, build the best team possible, relying on the Trade on transfer market and / or purchasing (with credits or FIFA Points) the packages, divided into: Bronze, Silver and Gold, directly from Shop. Once you have created your squad, it will finally be time to take the field, to face Single seasons o Online e Tournaments (which require specific requirements to access it) of various kinds that will vary throughout the year, offering rewards ranging from Player Packs, to Premium Gold Packs, up to sometimes (as happens in events such as St. Patrick's) to win even some Players with a higher overall than its starting characteristics.

The ability to progress quickly in the game is given not only by the "luck" factor when you open the packages in the Store but above all by your ability to win games, tournaments and championships that will allow you to earn excellent winnings to spend as you see fit. .

Other types of packages, will be released during the year, for example for the Christmas holidays (being also close to the awarding of the Golden Ball), it is not so difficult to come across packages costing 1000 FIFA Points (100000 credits) or Packages only Rare Gold players, only Consumables or celebratory (in which case the cards will not be exchangeable).

This year important innovations have been introduced, designed to ensure that the user can accumulate credits faster than in the past; in particular, in addition to the Seasons and the classic Tournaments, we have the new mode FUT Champions the new way to compete in FIFA 17 on Xbox One, PlayStation 4 and PC. Each week you can qualify for the Weekend League and try to win great in-game prizes. Prove your skills and climb the monthly leaderboards to win in-game prizes and have the opportunity to compete on the world stage.

Let's start from the "basics", when you access the game, you will be given an overview of the available functions, the advice we can give you is to immediately jump on the Coach assignments, which, unlike in the past, will provide you with rewards in reference to every single goal (there are 14 in total) that you will complete; you will receive credits, consumable items and packages (players on loan and / or non-tradable on the market) through which you can start building your dream squad.

Here are the assignments in detail:

- 11 starting players who will take the field must have certain features that allow him to create the fair agreement. First of all it is an important choice that of module, since, starting from the latter, we will go on the market to buy the players necessary to fill a specific role (for example, if we place a COC in the ATT position, the player's affinity value will drop drastically, in this specific case, usually we will pass from 10 to 6/7 of overall affinity with that precise role). Other parameters to consider are:
nationality, the Championship of origin e the CLub to which they belong; in fact, we will have the opportunity to build a team made up of players all having the same nation they belong to, or decide to create some Hybrid formations, with players from different leagues or why not, decide to select a single club and have all the best players in it.

The preponderant factor in FIFA Ultimate Team is definitely understanding which will be indicated by a series of lines that interconnect between the various players of your squad or better starting lineup ranging from finanacing (indicating a perfect understanding) al Yellow (i.e. a media agreement) and finally red (which in practice represents the lack of alchemy between one player and another). To avoid unnecessary waste of time looking for the best understanding between the members of your team, use the appropriate tool (i.e. Experimental Teams) that will allow you to simulate and understand the effects that a single change may have on your staff and consequently on your gaming understanding. 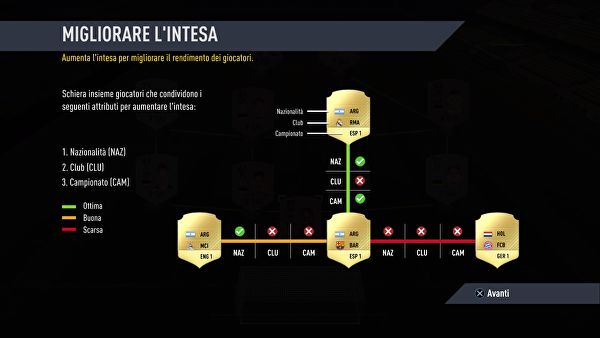 When you will have played 10 games with the same players (remember that those obtained from packages already have loyalty), they will get a understanding bonus (and if for example you have decided to build a Premier League and your manager trains in that particular league, you will have an added bonus).

There are several Styles of Understanding, which will affect the type of player attributes that will change: 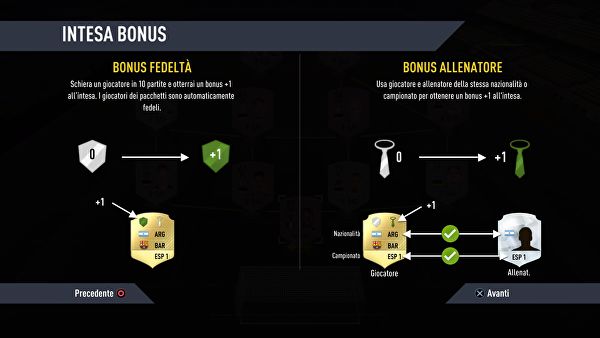 The consumables available are divided into 8 categories and will allow you to better manage every aspect of the team and our players:

The advice we can give you is to focus on Fitness and Contracts!

By playing the games, the players they will accumulate fatigue (those belonging to the Team of the Weeks they will tend to tire less) which will negatively affect their performance; for this reason, it will be necessary, even if you can very well replace the tired player with one from the bench, buy consumable cards called "Physical Form" (20, 40 or 60 in value) which will allow you to restore the form of a player instantly.

The contracts have variable durations of 1 or more lots (from EA catalog, depending on your level, for example I am at level 80 and with about 300000 credits, you can also unlock contracts with a value of 99). Each player who physically goes down on the pitch will use a contract unit (remember that those on the bench will not consume any contracts) and therefore it will be necessary to buy the contracts from the transfer market (divided into: Bronze, Silver and Gold) in order to ensure that the player can continue playing. As well as for the players, too the coaches of our team will need the contract renewal, so make a good stock of these to avoid running out of water.

NB At night, given the small number of users, prices are slightly lower, so the advice is to bid for consumables that expire at dawn; you won't get them all but there is a good chance to get them!

We finally get to give you some excellent advice on market auctions and how to save some credit which can always be convenient. Personally, from my experience with FUT, I can tell you that the FIFA Points they won't get you very far; in fact, unless you have blatant luck, you will find g
players with overall not particularly attractive, as finding Messi or Ronaldo is practically like finding a needle in a haystack. Here is that the Auctions and Trade they represent a good way to accumulate credits; you can buy players at lower prices (remember the note of the night hours) and resell them at a higher price (in this way you can accumulate hundreds of extra credits) on the market. Also, use the FUT Web App for browsers and the FIFA 17 Ultimate Team Companion App, available on iOS, Android and Windows for free. They allow you to manage your transactions and different aspects of your team from wherever you are and very often, thanks to the daily gifts, will give you the opportunity to get packages and bonus credits that really never hurt.

There are several ways to get credits:

FIFA Points are available in the prices you see below:

This mode was introduced last year (if you don't know what it is, you can read our article about it) is accessible for a fee, using the available credits or FIFA Points. Specifically, they will serve 15.000 creditsio 300 FIFA Points. We will have to create a squad, choosing a series of players that will be proposed to us (the choice will sometimes be really difficult, as we will find ourselves having to choose between Messi and Ronaldo or between Neymar and Bale and so on) but remember to follow a certain logic and always pursue the goal of having good alchemy team. By winning matches, you will earn packs and credits.

New interesting mode introduced this year; complete the challenges of the new mode Squad Building Challenges (SBC) to get special in-game rewards. Test your squad building skills by choosing from basic, advanced or league-specific challenges. The challenges will be updated constantly throughout the season. So check often.

The first thing to do is to choose one of the many challenges available. Let's take a closer look at an advanced two-nation challenge. To complete this challenge you will have to create a shortlist of eleven holders of two different nationalities, with a minimum understanding of 60.

Create a team that meets the challenge requirements using items in your club or on the transfer market. Each pack in FUT 17 will help you complete specific challenges and unlock rewards.

Once you've built a squad that meets the requirements, it's time to exchange it for great rewards. Think carefully which players to select to complete the challenge, because once the team is swapped, they will be lost. Completing a group's challenges unlocks additional rewards.

Certain challenges are part of a larger set, called a group. Completing an entire party awards more in-game rewards, so more challenges are worth completing!

FUT Champions mode - Another novelty of this new edition of FUT 2017; now we will be able to compete globally, with the chance to win real prizes, by completing a series of challenges in the FIFA 17 Ultimate Team. 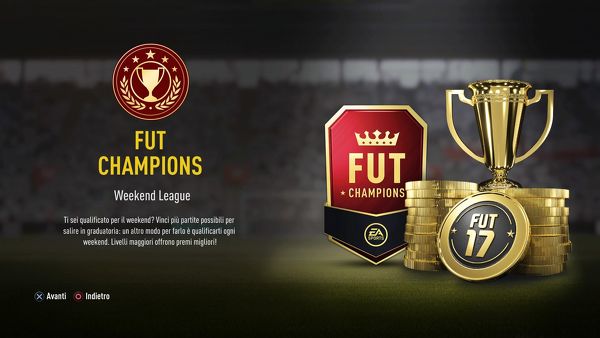 By winning the Daily FUT Elimination Tournaments, we will be able to earn in-game rewards and a seat in the Weekend League. By doing well in this competition, and by winning as many games as possible, we will get new cards as a reward to be able to upgrade the team.

For the absolute best, FUT Champions could be the ticket to competitions and win prizes in the real world, through the monthly regional leaderboards on Xbox One and PlayStation 4 that give access to the EA SPORTS FIFA 17 ULTIMATE TEAM ™ CHAMPIONSHIP SERIES and FIFA. INTERACTIVE WORLD CUP. Do you have what it takes to climb the leaderboards and qualify for the biggest competitions in EA SPORTS ™ FIFA history?

Here's what awaits you by completing the challenges in this new mode:

In addition to the Bronze, Silver, Gold and Elite rank, there are also the rewards that you will get from level 1 to level 100.

Tips at a glance: