Back to the Future Walkthrough: The Game - Episode 1 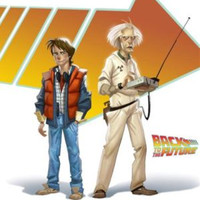 The solution of the game Back to the Future: The Game, videogame transposition curated by Telltale Games of Back to the Future, was written based on the European version of the title. This solution is therefore complete and usable for the following versions PSN, Xbox Live, PC and Apple.

Here the first of the five episodes of the series is treated.

Have a good adventure.

Where is Doc located?

The first game scene begins with Marty and Professor Emmett Brown, better known as “Doc,” who is testing his time machine in a parking lot.

Unfortunately, this experiment with the prodigious device will go wrong and Doc will ask Marty to retrieve the notebook containing all the information that the professor has collected on his time travels, so that it does not end up in the wrong hands.

At this point you will be taught how to move around the game environment.
Move Marty to the left and then click (hit action) on the toolbox to find the laptop.
As you can see, the cursor will light up when it points to an object with which it will be possible to interact, by doing so the name of the object will appear later.
Having found the notebook, Marty will have to notify Doc immediately; thus the professor will learn that the news of the last six months has been lost and his house has been repurchased; (after this scene, you will realize that all this was a simple nightmare). 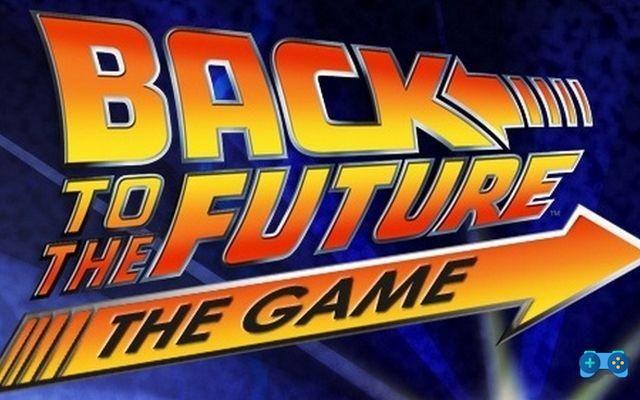 George, Marty's father, is in charge of selling all of Doc and Biff Tannen's properties, plus he's on the hunt for anything that might be worth next to nothing.

From this point, you can have some fun, looking around, examining all the various articles in the laboratory; just click / interact on any object to be able to interact with it.
Marty, taken by curiosity, wants to see at all costs if there is something really interesting in the laboratory; move to the second room and click on the Hill Valley Square layout. At this point the young McFly will see the travel notebook in one scene, inside the model of the courthouse, but unfortunately he will notice that Biff Tannen will steal it.

Once Marty sees the laptop stolen, you can move into the room next to the lab and notice George McFly pulling his son's guitar out of a box full of objects.
If you click on the guitar, it will be added to Marty's inventory.
The button to access the inventory will now appear on the top of the screen, next to the hint one (which will allow the player to have three tips on how to solve a puzzle) and next to the story button (which will allow you to have a summary of history to the point that you have come).
From the inventory screen you can select and have Marty use an item; in fact try now to select the guitar and turn on the amplifier, you will notice that Marty will start playing the instrument.
At this point Biff Tannen will arrive and steal the guitar and George will scold Biff, as well as take the object from his hands and give it to Marty.
The time has come to teach Biff a lesson; We all know that man loves to play the guitar and in case you have seen the first Back to the Future movie, you know that Professor Doc's amplifier will turn off if you put the amplification to the maximum.
Press the buttons on the device so that they light up and then select the guitar again; of course Biff will bully in and push Marty out of the room. Seeing that the controls have remained in operation, Biff will put them to maximum. At this point when it starts playing, it will turn off the amplifier and the shock wave will make it jump backwards; so while he's distracted, Marty can retrieve Doc's notebook. 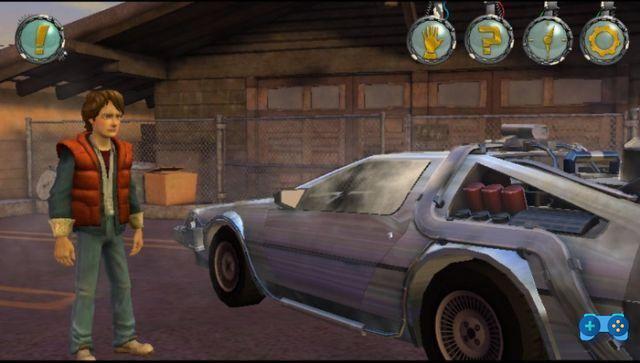 Suddenly you will hear strange noises coming from outside the house: it seems the sound of the DeLorean and Marty intrigued will put his head out to understand what is happening.
You will notice that she really came from a time travel, but will Doc be inside? To find out, simply examine the car.
Marty will open the car, but there will be no one inside but Einstein, Doc's dog. After that Marty will get inside the vehicle, to analyze some of its components, first of all: the tape recorder.
The tool is from Professor Doc and, as you may have guessed by now, is in trouble.
The car has been programmed automatically, to return to that moment in case something goes wrong.
The car apparently is here, so it means something bad must have happened to keep Doc from getting back into the vehicle. Now it's up to Marty to travel through time to understand what happened to Doc.
Fortunately, the car will have a system called “Last Time Departed”, which will let you know what year Doc is in and will explain to you in particular what that year will be like. Unfortunately, the time circuits are out of order, but it seems that Marty by examining the clues that Doc has left can figure out where he is. Inside the car there will be a women's shoe, but how will you understand how the shoe will allow you to find Doc?
Leave the car and let Einstein smell the shoe. The dog will catch the scent of the owner and luckily for you she lives in the immediate vicinity, so Marty will be able to follow Einstein to the house in question.
Marty will be in the center, near a portico and a liquor store, and between the two shops is a building with several apartments.
Now the mission that will be presented to you is this: guess in which lodging the woman resides. Select the desired doorbell and Marty will ring in the apartment of a woman named Edna.
The latter will look out of the window, but initially she will be very grumpy, especially because she believes that the young Mc Fly is a thug. Tell Edna, you have something for her and then show her the shoe.

Small warning:
Now he will invite you to his apartment, he will start boiling a cup of tea for you. Edna forgot to turn on the stove and therefore the infusion will never be ready;
if you turn on the radiator, it will whistle to indicate boiling, then Edna will leave the room for a while to look for tea (this is a very easy way to get rid of her if you need it).

Talk to her, trying to figure out when and where she lost this shoe in order to get clues as to where Doc is.
The woman will tell you that she lost her shoe and tell you that it was stolen by a madman, the day a foreigner from the city was burned.
You inquire and gather more information about that day and after a while she will reveal to you that this stranger was in the vicinity of the courthouse.

The following year a video store was built, in the place where the stranger was burned. Talk to Edna again about the newspapers and her binoculars which you will discover she uses to spy on others.
Then stop the conversation and select the binoculars; this will allow you to browse the video store.
You will see Biff Tannen, who will come out of the shop with something in his hand, and Marty will look at the shop sign, which will show the construction date: “February 1932”.
If the shop was built the year after the murder, it will be inferred that this happened in 1931, but precisely when?
Marty might go to the library, but Edna owns all the papers so check them out. The woman will stop you, but you turn on the radiator and she will go out of the room for a while. Marty will take a quick look at the 1931 headlines until he finds the article about Doc and tells you he was arrested for starting a fire.
Upon learning of the period, Marty will overturn the items, Edna annoyed will kick you out of her home. Get ready for a 30's style, as well as Einstein I recommend.
Get into the car and use the time circuits to turn it on, so use the display to enter the new destination; Doc was arrested on June 14, 1931 and the stranger was burned the day before.
Of course, Marty will have to go back in time before the stranger is burned and that way he can warn Doc, and thus prevent him from being arrested.
There will now be a short cutscene with some gangsters and cops near the courthouse.
Cyberpunk 2077 - How to increase FPS on PC if you have an older video card ❯

add a comment of Back to the Future Walkthrough: The Game - Episode 1