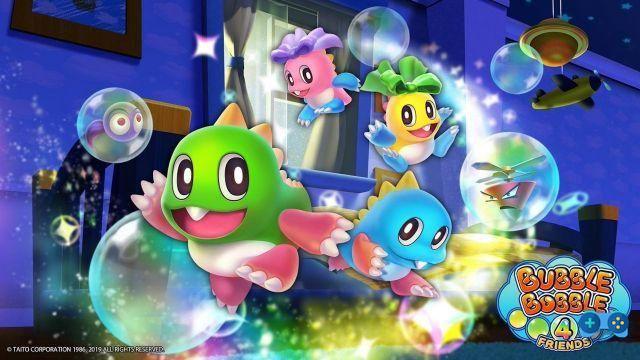 Since the release of the classic arcade Bubble Bobble by Taito back in 1986, the focus of the series has remained virtually unchanged with a proven and winning formula. The major "deviations" are represented by Rainbow Islands e Parasol Stars, two sequels that brought Bub and Bob back to their human forms. However, the Puzzle Bobble spin-off series brought the heroes back to their lizard-like forms, and since then Taito has tried time and time again to resurrect the historic franchise. More than thirty years after the original release, the art of trapping enemies in bubbles still works - and yes, that music never really gets old.

The narrative begins with Bub in a bedroom in the dark all hidden and cuddly with the antagonist of the series: Bonner (whose name has changed from the original Japanese "Drunk") until Bonner is struck by some sort of magic , which revives his nefarious ways - kicking off the events of Bubble Bobble 4 Friends.

If you've played a game of Bubble Bobble before, you'll know what to expect here; a frantic game 2D arcade / platformer spread over 100 levels, each with a single stage that must be completed by eliminating all enemies in order to proceed to the next. We will have to kill the enemies by trapping them in bubbles that the characters can shoot directly from their mouths and then remove them from the level by bursting the relative bubble using their head or feet. It's essentially two-button gameplay that's the epitome of pick-up-and-play accessibility. 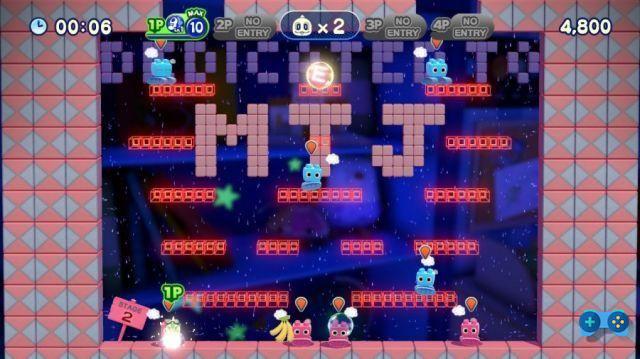 The first handful of levels serves as a game tutorial and features a modernized version of the Bubble Bobble music theme. You grasp the fundamentals of the game which boil down to a simple "clear the enemies from the screen and collect all the fruits to get bonus points". There are also the more complicated EXTEND bubbles to collect, which not only guarantee extra life but can improve unlockable powers after each boss fight (which occurs every ten levels) and involve little extra challenges at each level. The powers range from thunder bubbles that can wipe out entire lines of enemies to time bomb bubbles, up to a feature that we can define as a snap that turns out to be particularly useful in the later stages of the game.

More fun when played in company

As the title name suggests, up to four players can be played by sharing their lives. The game is equipped with a single-shot killing system, so when our character is hit by an enemy or a ranged attack, he will inevitably get stuck in a bubble and start floating around the screen, following the wind currents at the neon background. At this point, he can be saved by another player and retain a life, which is not as easy as it sounds; our companions may be forced to use bubbles to build floating platforms to reach us and they will only have a handful of seconds to do so before our character succumbs to his sparkling fate.

While the game rewards the player's skills, it makes sure that the player has fun. For example, if a level fails three times, it can be tackled with invincibility, a simple inclusion that ensures that players of all ages and abilities can progress to the end and enjoy the game. Since this is aimed at families (sadly there is no online mode), it's a smart move. That said, it's a shame that Bubble Bobble 4 Friends lacks competitive modes; while the theme is strongly linked to working and cooperating together, it would have greatly lengthened the duration of the game to have some sort of head-to-head challenges that players could take part in. Therefore, our total score is also combined throughout the game, so there is little room for bragging here.

The graphics are quite striking; in the screenshots, Bubble Bobble 4 Friends may seem bland and static, but in reality almost everything in the game moves smoothly and there is a “lightheartedness” and a sense of movement in the level design that gives a sense of life. The game characters are represented by 3D models on a 2D background. The framerate was almost always stable and we didn't notice moments of noticeable drops. While it's not a visually demanding game, this fluidity makes the movement and gameplay really enjoyable. 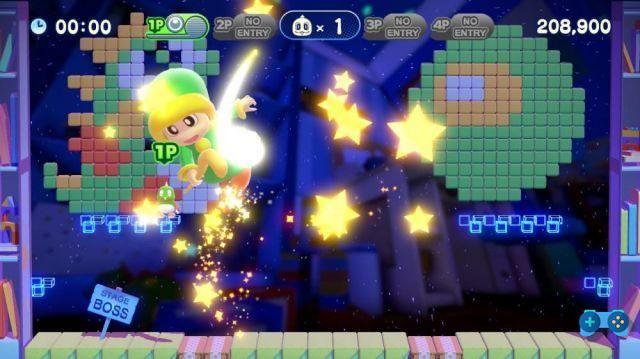 In addition to Bubble Bobble 4 Friends, the game also contains the original Bubble Bobble, a welcome addition that proves that even decades later, Taito's fatigue still continues to entertain. The game is present as an arcade cabinet in the corner of the bedroom that makes up the "world map". As in the original, the updated version of Bubble Bobble features 100 levels of increasing difficulty. The stages of Bubble Bobble 4 Friends are represented by the game, which we can define as "main" consisting of 50 levels which, once completed, will allow you to play them in the newly unlocked difficult mode, which will make the challenge even more adrenaline. While the layout of these levels is mostly the same as before - apart from some visual developments - the additions, difficulties and enemy strategies needed to progress make the game feel fresh from start to finish. The developer describes them as 50 "family" levels and 50 "challenging" levels.

Bubble Bobble 4 Friends is a fun title. It offers a solid balance of fun and challenge with high replay value thanks to the scoring system and collectibles, as well as the inclusion of the original game in the series. The focus on teamwork will be wonderful for families and friends looking for some cooperative fun, but the lack of online modes and the absence of real competitive features could limit its longevity. What we have here is a fairly brilliant take on a classic with amazing and timeless gameplay that doesn't need to be completely overhauled to keep it fresh and fit for the modern era.

- Keeps the spirit of the original

- The gameplay is accessible to all

- The game is smooth and fun

- No online or competitive modes

- 50 levels in two difficulty modes may disappoint some players

Summary
What we have here is a fairly brilliant take on a classic with stunning and timeless gameplay that doesn't need to be completely overhauled to keep it fresh and fit for the modern era.
gameplay
Graphics
Sonoro
Longevity
Final judgement
Do you want to complete all the achievements and trophies and know all the tricks, guides and secrets for your video games? SoulTricks.com is a group of video game fans who want to share the best tricks, secrets, guides and tips. We offer the best content to be a source of useful information, so here you can find guides, tricks, secrets and tips so you can enjoy your games to the fullest. Are you ready to get all the achievements of that game that you resist so much? Enter and enjoy your favorite video game to the fullest!
Dissidia Final Fantasy NT Review ❯

Into the Dead 2 review