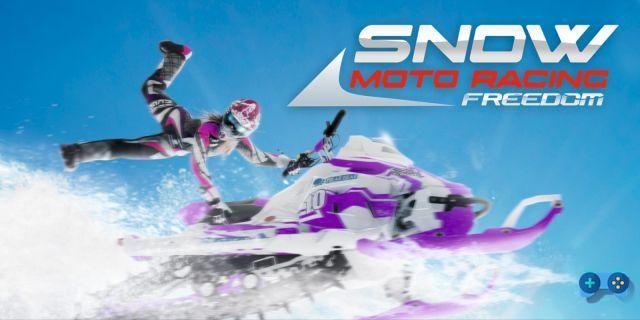 Racing at full speed between the snow banks.

The German developer Zordix it is not new in the videogame scene, especially as regards the consoles of the great N. Last year it released Aqua Moto Racing 3D, a racing game starring jet skis, exclusively for Nintendo 3DS. The developer will try again this time, and in collaboration with Big Ben Interactive, brings to the new Nintendo console Snow Moto Racing Freedom, spiritual sequel to the 3DS title and the previously reviewed Aqua Moto Racing Utopia.

Snow Moto Racing Freedom it belongs, without a shadow of a doubt, to a niche genre, a particular type of game loved in the past but which, over the years, has seen a constant decline in interest and quality from developers. Few have been the titles dedicated to the genre, in recent years, which have left a positive memory in the memory of the players. Perhaps some will remember the famous Wave Race, with its Kawasaki bikes, a milestone of the genre that made its debut on the Nintendo 64.

Zordix with its Snow Moto Racing Freedom will he be able to create a qualitatively valid product? Could it become a new starting point to revive this genre of games? Let's find out in our review! 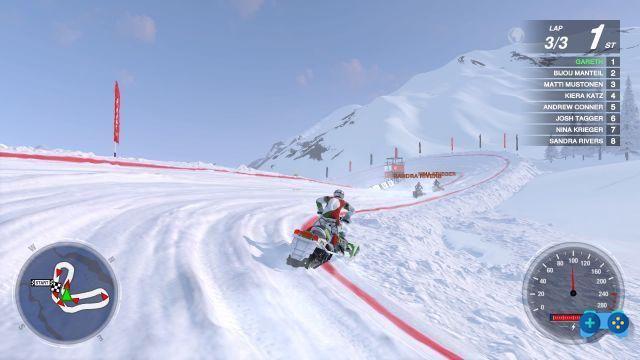 We ride the snow.

Having already been out on PlayStation 4 and PC for more than a year, Snow Moto Racing Freedom it is not a real novelty in the videogame panorama but it remains the first and only (pending the release of Riptide GP Renegade) exponent of the genre available on Nintendo Switch.

As soon as you start the game you will be able to customize your rider and your bike using a simple and convenient editor. You can then select the nationality and details for your rider, including the type of helmet, clothing and much more.

Having overcome the choice of your avatar, Snow Moto Racing Freedom will immediately launch you into the action through a simple tutorial that will explain the basics of the title. Just the tutorial appears immediately too "light", omitting the teaching of tricks and basic evolutions to continue in the advancement of the game.

The game also features the first person view, certainly a nice addition but which, in terms of gameplay, appears too impractical and not very useful. 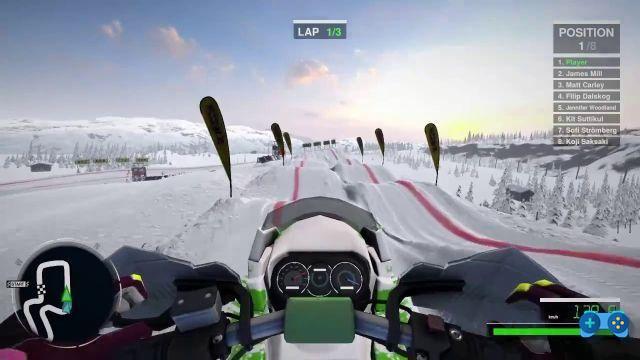 An infinite ocean of opportunities.

Once you have completed the tutorial you will find yourself in the initial menu, from which you can choose from a good amount of content. In fact, there are many methods and races proposed, especially with regard to multiplayer, but let's proceed in order. The single-player still remains the main component of the title, giving the player the possibility to choose between three different categories: Runabout, Ski and Freestyle.


Paradoxically, the first two modes will not be very different from each other, as in both you will compete against eight opponents in “circuit” races in which you will have to try to finish first. The only difference lies in the types of bikes that the game will make available to you. In the Freestyle category, on the other hand, your goal will be to perform various stunts, in a limited amount of time, through which you will have to try to accumulate as many points as possible, to climb the rankings and beat your opponents.


Each category has a good number of championships, each consisting of three / four different races and, to continue, you will have to rank in the first three positions. In this way you will unlock the following championships, the difficulty of which will progressively increase. It will also be possible to buy more performing bikes with the money you will get by winning the championships, collecting the tokens scattered on the map and performing stunts during the individual races. Finally, there are also the inevitable time trials with lots of medals to be obtained.

However, by competing, the real problems of the game will become clear: you will soon realize how badly the game difficulty is calibrated, which translates into an AI that is too aggressive already from the early stages of the game.

The excellent multiplayer sector available to the title deserves attention, with many modes available, some of which are really successful and fun. Multiplayer is offline only and supports up to four split screen players.

Fun yes… but with ups and downs.

Technically speaking, unfortunately, the title is not exceptional. The graphics sector is certainly the least cared for of the whole package, with textures not always defined and a general yield anyway below the standards to which the Switch hardware has now accustomed us.

The physics of water and more generally of the movements of your bike, often inaccurate and with results that are too unpredictable, also need to be reviewed.

During our test we also found annoying slowdowns, in the most excited situations, in docked mode. Problems that, in the same situations and conditions, in portable mode we have not encountered in the least. This is why we consider the latter the best way to make the most of Snow Moto Racing Freedom.

On the other hand, the creation of the game environments is good, with inspired circuits that let you get to the heart of the mountain settings. The motorbikes are also excellent both in terms of number and realization that, thanks also to the presence of the editor, you can make them personal and unique.

Finally, the sound sector is also nice, with “fresh” tracks all dedicated to the mountain environment.

Zordix has certainly tried to create a valid and fun product but which, for one reason or another, does not fully succeed in its intent. Snow Moto Racing Freedom, unfortunately, he suffers terribly on the technical side, showing evident limits on which the players will hardly know how to override. On the other hand, the large amount of content that, in one way or another, tries to please every player is commendable. Finally, the multiplayer sector (exclusively locally) is noteworthy, which will be able to offer, despite everything, pleasant games in the company of friends.

Do you want to complete all the achievements and trophies and know all the tricks, guides and secrets for your video games? SoulTricks.com is a group of video game fans who want to share the best tricks, secrets, guides and tips. We offer the best content to be a source of useful information, so here you can find guides, tricks, secrets and tips so you can enjoy your games to the fullest. Are you ready to get all the achievements of that game that you resist so much? Enter and enjoy your favorite video game to the fullest!
The Elder Scrolls V: Skyrim, the game maps ❯