Since their first official release on GameBoy the video games of Pokémon have seen one, or more, spin-offs dedicated to the lovable captive monsters created by the brilliant mind of Satoshi Tajiri. Back then it was 2000 when the first puzzle game dedicated to them - and inspired by Pon Panel - came to life: we are talking about Pokémon Puzzle Challenge, to GameBoy Color, followed then, after a few months on Nintendo 64 da Pokémon Puzzle League and finally, many years later, from Pokémon Link su Nintendo DS. The franchise was not destined to die and that is why on February 13 this year, on the occasion of the Nintendo Direct, the new installation of the series dedicated to the Nintendo portable consoles of the family has finally been announced 3DS. The title is available on Nintendo eShop di Nintendo 3DS from 13 March 2014, at a cost of € 7,99 and takes up about 43Mb.

What matters is always to catch them all!

For a decade now, the puzzle game series dedicated to Pokémon keeps its game formula unchanged, repeatedly declared a winner. Although lacking a plot or a story to follow, the title is quite fun and boasts a game system capable of making the user aware of the progress made thanks to the possibility of capturing all the Pokémon until today released.
We will find ourselves from the beginning in a small menu that will ask us to choose between the single or two player game; once we have made our choice - in our case the single player mode - we will be immediately catapulted into the center of the action and we will be shown a simple game map divided into zones and sub-zones; once the zone to play on has been chosen, it will be possible to choose the sub-zone to be faced whose information, once the choice has been made, will be shown on the upper screen. This choice will then be confirmed by touching the selected sub-zone again.
Only at this point will we be allowed to start playing: a very simple one UI will enable us to understand what is happening, the enemy we are facing and its energy, together with the path, whose beginning and end are delimited by the extremes of a straight line to follow, and the number of Pokémon that we will meet until we reach the goal; on the lower screen our energy will be shown, present both at the right and at the left edge of the screen, and finally the game scheme, where we will be able to move freely all the Pokémon show yourself and match them three by three in order to attack the enemy, consume his energy and thus be able to capture him.
During the pairing it is possible to carry out various combos, until the "Pokémon Link" status is reached, which will then allow the pairing of two by two Pokémon and in some cases it will cause the fall of "Ditto", Which will play a role of"Jolly"And which can, therefore, be combined with any Pokémon. If we manage to clear the entire game screen we will get a "Perfect Link”And the screen will be filled with again Pokémon, allowing us to continue our combo if we were fast enough to be able to match more Pokémon.
It is also worth noting a similar system of weaknesses and resistances to that found in games RPG of the series: it will be possible to inflict more damage to a Pokémon Fire-type using Water-type attacks, and so on.

From a technical point of view, the title is not totally judged, being focused only on the gameplay. The sound sector, however, is worthy of its lineage and boasts a nice soundtrack and different effects that will accompany us throughout our adventures. 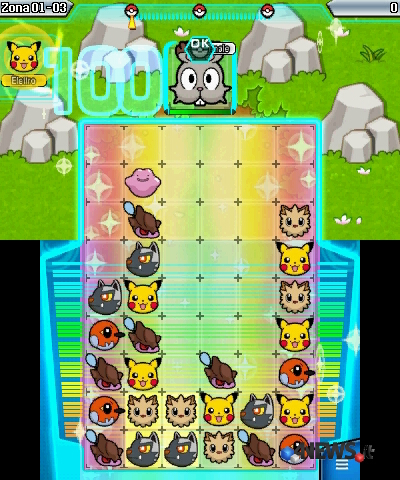 Pokémon Link: Battle! is a very valid puzzle-game that enriches the now vast library of background titles Pokémon; keeping the game structure unchanged, identical to the previous titles in the series, it expands its potential and longevity with the entry of Pokémon of the new series X ed Y. If you are a puzzle-game lover (or simply love Pikachu and associates), Pokémon Link: Battle! is what it does for you. You will spend many hours in the company of your favorite monsters!

Do you want to complete all the achievements and trophies and know all the tricks, guides and secrets for your video games? SoulTricks.com is a group of video game fans who want to share the best tricks, secrets, guides and tips. We offer the best content to be a source of useful information, so here you can find guides, tricks, secrets and tips so you can enjoy your games to the fullest. Are you ready to get all the achievements of that game that you resist so much? Enter and enjoy your favorite video game to the fullest!
Dark Souls III, Lords of the Embers (Guardians of the Abyss, Aldrich and Yhorm) ❯