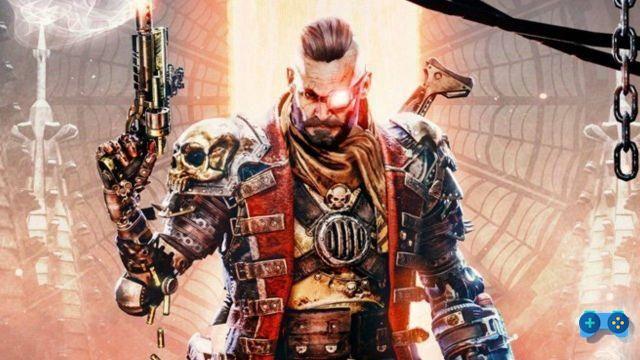 Necromunda: Hired Gun is one first person shooter set in the dystopian / cyberpunk city which is the background to the boardgame Necromunda, set in the universe of Warhammer 40k. This is a setting that has already appeared in video games, but very rarely. The gameplay looks more like that of the first work of StreumOn than to that, more tactical, of Deathwing. The protagonist will be able to perform in quick sequence wall runs, dodges and grappling hooks to move quickly through the scenario.

Combat is frantic and lethal, very similar to what happens in new reincarnations of Doom, Complete with spectacular and destructive finishing moves. But in this game it is also possible to procure bionic enhancements, which can be upgraded over the course of the game, which brings us back to something more like Dishonored. The gameplay revolves around contracts from bounty hunters, which will lead us on the trail of some of the most dangerous criminals in theUnderhive.

There will also be a animal companion: a dog, but it would be more appropriate to say a creature half mastiff and half robot. And it will be possible to enhance the dog's skills and weapons as much as those of the protagonist. It is definitely a game very different from what we are used to in the context of Warhammer 40k. As this is a strategy game, it has historically always inspired strategic titles; in this case, however, it will be necessary think little and shoot a lot.

Do you want to complete all the achievements and trophies and know all the tricks, guides and secrets for your video games? SoulTricks.com is a group of video game fans who want to share the best tricks, secrets, guides and tips. We offer the best content to be a source of useful information, so here you can find guides, tricks, secrets and tips so you can enjoy your games to the fullest. Are you ready to get all the achievements of that game that you resist so much? Enter and enjoy your favorite video game to the fullest!
New Super Mario Bros 2 solution for 3DS ❯

Dark Souls, Namco announces the release date of the DLC Artorias of the Abyss

Kingdom Hearts 3, the co-director of the game talks about the combat system and spells