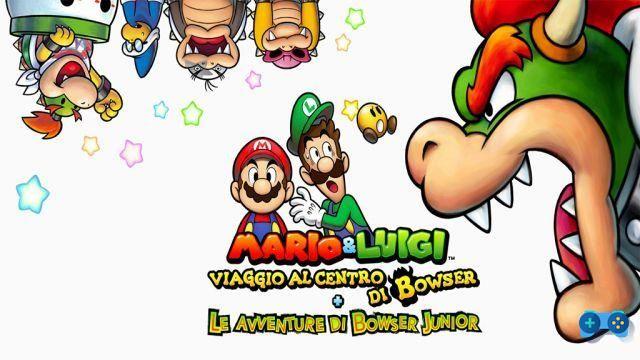 Mario & Luigi: Bowser's Journey to the Center is the remake of the hit Nintendo DS game from 2009.

After a first glance we realize that we are in front of one of the best RPGs where the mustachioed plumber appears.

A bit of history

For those who haven't played the 2009 title, a refresher is needed. The Mushroom Kingdom is plagued by a terrible plague (never a day of peace, huh?).

The Toads are swelling due to the gravitombolite, Princess Peach then calls an emergency meeting and summons the two plumbers, Master Toad and many other heroes of the Kingdom.

Suddenly Bowser raids the castle, but is quickly sent back, which infuriates the porcupine.

A hooded stranger offers Bowser a mushroom to quench his hunger for revenge. From that moment he begins to suck in whatever stands in front of his jaws.

At this point the hooded stranger reveals himself and we discover that it is Grin. Bowser runs to the castle to warn everyone, but as soon as he opens his mouth he swallows everyone in the meeting, including Peach, Mario and Luigi.


Grin after getting the desired result through this cunning ploy prepares to take over the world.

The efforts of the two brothers to free Peach and get out of the stomach of the archenemy of all time will not be enough, they will need a "little help" from outside.

And this is where the Nintendo guys had a brilliant idea, the screen that in the Nintendo portable console is divided into two elements, will not show gameplay above and map below, as generally happens. At the top of the screen you will see and control Bowser, while on the secondary screen there are the two mustachioed brothers.

This solo co-op style will often lead you to sharpen your wits, as only Nintendo can.

The fundamentals of combat are based on the mechanics we have already seen in previous Mario RPGs, for example by pressing the right button with the right timing you can inflict more damage.

The novelties of the title are not very many apart from the graphic work done on 3DS, which brings the game from the cartoonish effect of DS to something that is close to Super Mario RPG: Legend of the Seven Stars (1996) for those who have not had the lucky to play it in its time, let's say that Bowser's Mario & Luigi: Journey to the Center is more reminiscent of drawings taken from books, which provides the graphics sector with a timeless beauty.

That said, the game will be overly easy most of the time, except for the last few parts, but this deprives the title of the challenge rate, an essential element in games.

The comparison is certainly forced, but the writing of the title is something hilarious and filled with irony and intelligence. The very concept of the journey that the Mario Brothers take is really interesting, often able to raise aspects of the characters that we never imagined before.

A welcome gimmick in gameplay is when the player has to put the Nintendo 3DS upright to play as a huge Bowser.

The adventure of Bowser Junior

One of the main novelties of this remake is that the little Bowser Junior has been given a story of his own.

Our little hedgehog, helped by the Bowserotti and the inevitable Kamek, will have to face the ruthless BIO Team, a team of bad guys fielded by the evil grin.

Will our Bowser Junior be able to follow his father's charismatic leadership and lead his team to victory?

Team? That's right, the son of the great Koopa leader will not fight in the first person, but he will rely on a team that we will build as we progress in the game.


Like any wise commander you will have to study the characteristics of the enemies and deploy the formation capable of doing the most damage. Like any self-respecting army, our Bowser Jr. can rely on some lieutenants, such as the Bowserotti able to inflict massive damage thanks to their special abilities.

You can upgrade your troops using Amiibo, in this case those of Bowser Jr, Bowser, Boo, Goomba and Koopa will be particularly useful.

- It is often too easy in both modes

Summary Mario & Luigi: Bowser's Journey to the Center + Bowser Junior's adventures have made it through the Ten Years Challenge. The new art style might leave cartoon lovers a little cold, but rest assured, the very special gameplay combined with a script that oozes humor will keep you entertained.

Do you want to complete all the achievements and trophies and know all the tricks, guides and secrets for your video games? SoulTricks.com is a group of video game fans who want to share the best tricks, secrets, guides and tips. We offer the best content to be a source of useful information, so here you can find guides, tricks, secrets and tips so you can enjoy your games to the fullest. Are you ready to get all the achievements of that game that you resist so much? Enter and enjoy your favorite video game to the fullest!
Payday 2 Switch Edition, our review ❯

Add a comment from Mario & Luigi: Journey to the Center of Bowser + The Adventures of Bowser Junior - our review