Whet your appetite and your imagination!

Turning back and looking at the videogame tie-in market that has popped up on our consoles and PCs is the most depressing thing for a gamer to undergo. Unthinkable experiments, gameplay to be swallowed like sour grapes and, from a technical point of view, real abuses to get your eyes out. For some years now, however, although the general trend has not changed, small steps forward have been made, and, in the wake of productions like Batman Arkham, software houses have begun to understand that probably burning an IP and a prestigious brand with mediocre games, maybe it's not a big deal. Exempt from the general defeatist climate, however, it has always been the series of titles from England that make a boast of the absence of photorealism: we are talking of course LEGO.

TT Games (this software house) is now a well-known name in the videogame industry, especially because of the small miracle that the guys on the team managed to do using well-known brands: LEGO plus another random license and every time churning out small sweet and sour flavored delicacies. Although with all the defects of the case, experiencing the debut titles and those of transition, with the last effort, Lego: The Hobbit, the TT games embark on an arduous undertaking, facing a difficult license to manage and which comes out just 2/3 of the way, that is when the first two films have been released and with a third in the pipeline in December 2014. With half-filled baggage, part of trust and part of fear, we ventured with Bilbo, Gandalf, Thorin and the company of the Dwarves on an adventure in Middle-earth.

Do not consider it a review, but rather a travel diary that will tell you about our feelings, quite contrasting to tell the truth. But will there be a happy ending?

For those three / four people who didn't know yet Tolkien and his works, and if they happened in this review by pure chance, a brief introduction might be useful: the universe of "The Lord of the Rings"And Middle-earth begins with The Hobbit, the first book, actually written as a fairy tale: Bilbo and Gandalf together with Thorin Oakenshield and 12 Dwarfs begin their journey in search of the Arkengemma, a lost dwarven relic currently guarded by the mighty and mighty dragon Smaug. It is during this journey that Bilbo will come across the One Ring directly, but that's another story.

In LEGO: The Hobbit the adventure follows very closely the chronicles narrated in the film: one is introduced to the great battle against Smaug, then catapulted into the present for the departure and again transported back in time since the last piece is missing, that is the feud against the Orcs, which they will be the second true antagonists of this journey besides the Dragon. The fact that everything is brought back almost to perfection is certainly an extra point: very often in fact the tie-ins are not only technically poor, but also sin a lot in terms of plot and explanation of events. Throughout our adventure we will hardly find holes in the plot, everything is explained, in detail, making the narration enjoyable from the first to the last minute of the game.

But obviously it's not all pink and flowers; in fact, as the narrative evolves, the story stops leaving the player stunned. Why such a choice was made has really influenced our judgment so much.

As specified in the opening, LEGO: The Hobbit comes out before the third upcoming film: perhaps to ride the wave of enthusiasm again, so as not to weaken the spirits, we have traveled a path that does not please the videogame panorama, quite the contrary. It is almost a disfigurement perpetrated against those who pay out 50 euros by making an act of faith drenched only by the desire to have fun. The third film will only hit screens in December 2014 and will be made available as DLC. It is not a tragedy, but we wonder why to sell a game without its real ending.

A beautiful journey awaits us

Despite this, LEGO: The Hobbit has a gameplay definitely strong. Exploration is the undisputed queen of the entire play system: destroying objects to collect gears, using slings, bows and so on to solve puzzles, as well as obviously the countless missions to recover some objects make it more pleasant to continue in the battles .

The pride of the title is also the construction of useful objects to continue. Very often, in fact, we will be called to build a workbench to advance in the level and to do so we will have to collect the treasures, or materials such as copper, iron, wood, gold etc.: once the right amount is obtained, it will be possible to access a mini- game, where the construction will be carried out directly by us by choosing the right piece; to add sparkle the system will reward the fastest and those who build without making mistakes, with more gears to add to our loot. It is not actually a gimmick to lengthen the playability or make it different, but it is a real addition to make everything more dynamic, without leaving great moments of emptiness.


A further and pleasant addition are the skills of each single member of the group: for example, to use the slingshot you will need to use a specific dwarf, while to illuminate the dark areas there will be Gandalf and to fish we will rely on Bilbo. To complete this painting there are the battles, which also take place with the use of QTE and the union of two characters, to break walls or destroy enemies much bigger than us. Without forgetting the epic battles that made the fortune of Jackson: faithfully reproduced, they convey the emotion of a real battle. Particular attention should be paid to the Open World, which will allow us to explore Middle-earth, dungeons and play secondary adventures. Also present is the cooperative, now a classic of LEGO titles. All this translates into painstaking work, devoid of very big defects and that will allow us to enjoy an excellent level of gameplay

Evaluate the technical aspect of LEGO: The Hobbit it is actually quite simple: clean, bright and colorful graphics alternate with non-precise polygonal models. The anti-aliasing inserted is not of the best quality, unfortunately allowing a glimpse of many small jagged edges. However, atmospheric effects and a sound that leaves little room for regret compensate for the work done on a technical level. Even the level design is pleasant, with woods, caves, towns and anything else that will be a real pleasure to explore, given the fidelity with the original works.

A praise must certainly be given to the care of the dubbing (strictly in English) which has been able to give its own life to the plastic characters. 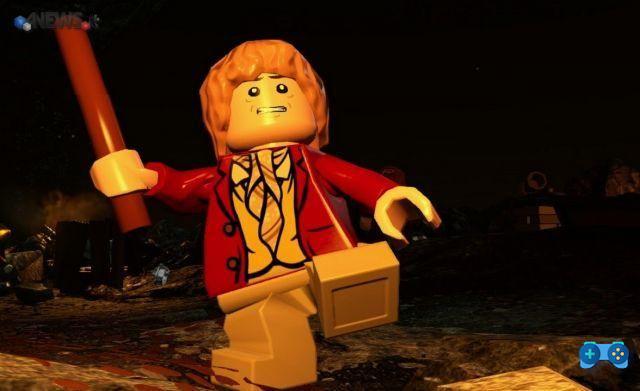 LEGO: The Hobbit it is not a tie-in that borders on perfection, but it is still a pleasant title to play, more to watch given the mastery of the direction. However, it remains a game limited to those users who love Tolkien's works and Lego. This does not exclude that the title remains enjoyable even by individual action adventure lovers, but unfortunately it would remain an enjoyable experience only halfway. Waiting for the third chapter, Lego: The Hobbit it is postponed to a later date for a more "complete" evaluation.

Do you want to complete all the achievements and trophies and know all the tricks, guides and secrets for your video games? SoulTricks.com is a group of video game fans who want to share the best tricks, secrets, guides and tips. We offer the best content to be a source of useful information, so here you can find guides, tricks, secrets and tips so you can enjoy your games to the fullest. Are you ready to get all the achievements of that game that you resist so much? Enter and enjoy your favorite video game to the fullest!
FIFA 21, the best Base-Medium Icons under one million - Midfielders ❯