We are almost at the end of the first Hollow Knight dungeon. So let's go back to beetle station of the Forgotten Paths, from there let's go up and head to the left. Here we will be able to face another Guard Wreck. But be careful: in this area there is a secret! We must try to attract the enemy on the far left, and of make him hit the wall with his hammer. In this way a secret passage will open. At that point you may find yourself stuck without being able to dodge theshock wave with which the opponent attacks. Don't worry: just go down the step to the left to avoid being hit. 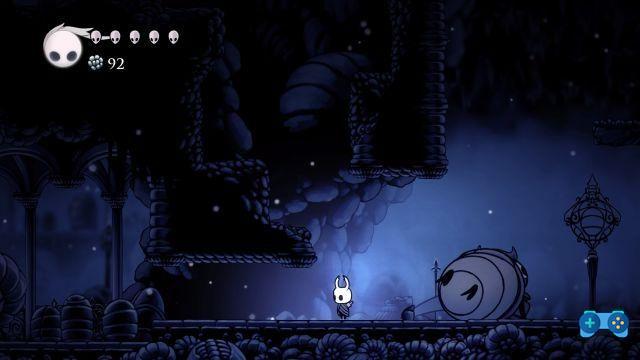 In the passage that has opened for now there is only one enemy e a block of Geo. Continuing on the main road, instead, beyond some wrecks, we arrive in one great room, in which we can only climb to the top. From here you reach an arena with three other enemies, and once these are defeated, it will leave Hollow Knight's first real boss fight:


The False Knight
He is a formidable opponent, but following some guidelines will not give you any problems. The first fundamental tip is to take advantage of the moments when the enemy jumps forward to pass under him and hit him repeatedly from behind. Be careful when the Knight jumps with the hammer outstretched: a dangerous attack from above is about to arrive. When we have hit it enough times, the enemy will collapse to the ground, revealing the little creature that has taken possession of this armor. In this short window we can heal or attack. But be careful: when the False Knight gets up, he will position himself in the center of the arena hammering left and right, making it impossible to approach him for a few seconds. In addition, dangerous debris will rain down from the ceiling at this stage. Another attack that the boss will start making after we land it will be announced by a back jump. In this case, be ready: the enemy is about to drop the hammer, generating a shock wave and raining more debris. When the boss has been hit enough times, he will launch into a jump attack and smash the floor. Going down we will find him lying on the ground, helpless. Just hit him the last few times to defeat him definitively. 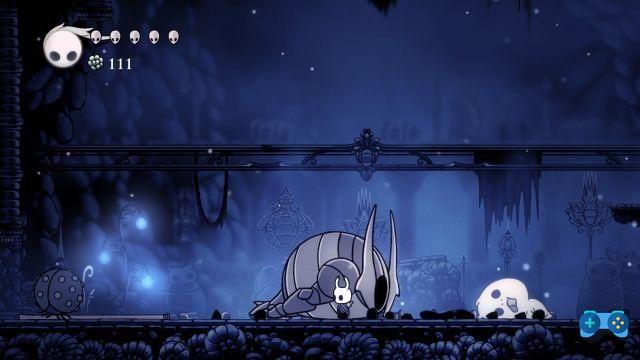 At this point the little creature will be thrown out of thearmor not his. Who knows who it actually belonged to ... While it is possible to watch the ball of the hammer used by the False Knight go away on its paws from the floor you can collect the Citizen Coat of Arms. This is in fact a key, which for now we do not need.

Carrying on on the left we find a chest which will give us the important figure of 200 Geo. Still further we come to Ancestral knoll, a creepy area with torches and gods insect skulls. Going up you come to a building, inside which there is a bench and a character, the Snail Shaman. The shaman will give us "a gift": it will give us the power "Vengeful Spirit", an attack that uses souls to fire a bullet. So we discover that the souls in Hollow Knight are not only for healing, but also have an offensive use. 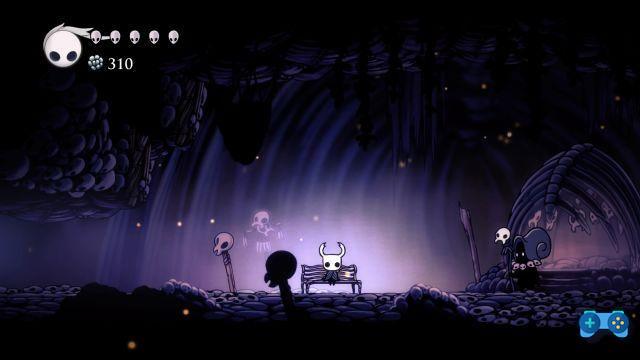 In exchange of power, the shaman asks us a favor: he wants us to free the temple for him. Let's say it doesn't leave us much choice. Entering this scary area, we meet various enemies, especially Baldori. In some places, to continue we will have to break some wooden planks. Near the end of this dangerous area, we can find on the left a black statue, one of those who release souls.

Here, continuing past the many little enemies, we can find a couple of Geo blocks and a vital blood core. Instead, reaching the end of the area, we find the ravenous beast that infests the Ancestral Hill, which turns out to be a simple Baldoro Elder. But now we can defeat him, using our new power. Stay away from him, kill the little ones he throws at you every now and then use the Vengeful Spirit to strike him until he dies. Here if you have been careful you can already understand that we are in front of the first power up which, in perfect metroidvania style, there opens a way. We met another Baldoro Elder earlier, that it blocked the way to a green area: our next destination. 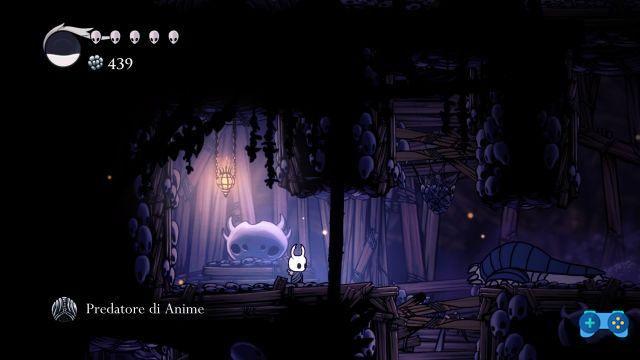 Once defeated, we find the precious Soul Predator amulet and we can go back to the shaman, who will open the way for us. It will also reveal that it was the pestilential air that haunts the area that made the creature nasty. It is not the first time that Hollow Knight has suggested that in some way this underground kingdom clouded the minds of its inhabitants ...

At this point we sit on the bench and we equip the new amulet just found, able to make us get more souls. Now let's get ready: we are about to leave for the new area: Verdevia.

Finally, I invite you to subscribe to ours telegram group to have a direct relationship with the editorial staff. This way you can do any questions you want and clarify any doubts, as well as stay updated on all the news from the videogame world.

Back to the guide of the Forgotten Paths part II

Do you want to complete all the achievements and trophies and know all the tricks, guides and secrets for your video games? SoulTricks.com is a group of video game fans who want to share the best tricks, secrets, guides and tips. We offer the best content to be a source of useful information, so here you can find guides, tricks, secrets and tips so you can enjoy your games to the fullest. Are you ready to get all the achievements of that game that you resist so much? Enter and enjoy your favorite video game to the fullest!
Walkthrough Amnesia Memories: guide to dialogues and endings ❯