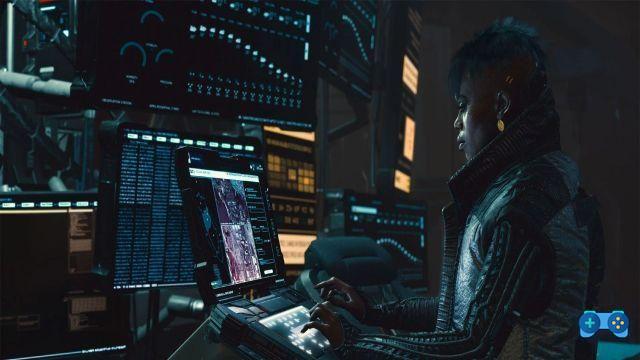 Hacking can simplify life in the futuristic world of Cyberpunk 2077. In this guide we will focus on everything related to the functionality of hacking, so as to make the most of the potential it offers and transform V into a stronger netrunner.

Going into more detail, you will learn:

In the absence of hackers, we cannot speak of a true cyberpunk dystopia. Night City it offers multiple opportunities for netrunners to influence the surrounding environment through various hacks.

Receive money and components: use the quick hack "Data Mining”To obtain Eurodollars (also called Eddie or ED) and components for the Cyberdeck from access points marked with a red symbol. There are up to three "lines" for hacks of this type, which differ in difficulty and rewards obtained as long as you are able to hack the device.


Hack and damage enemies: by using appropriate quick hacks you can break the Cyberware opponent, lock their weapons, damage them, increase their vulnerabilities to certain types of damage or cause them to commit suicide. Depending on the capacity of yours Cyberdeck and the level of your perks, you will have very useful options for different combat situations.

Use safety systems: you can control surveillance cameras connected to hostile networks, with which to observe enemy positions. With the quick hack "Check turret", you can make the turrets your allies and make your enemies attack. Alternatively, you can deactivate your opponents' technical equipment, making them useless against V.

Distract Enemies: depending on the devices to which you apply the quick hack "Distract Enemies”, The effect will vary: TVs will turn on and blink, you can activate backlights, explode machine parts and more. Doing so will attract enemies to that location for some time, allowing you to either eliminate them or go unnoticed.

V needs a Cyberdeck to perform a hack; luckily you will already have one equipped since the beginning of the game, even if with rather mediocre values. Every Cyberdeck requires an operating system that has a value buffer, an amount of slots for quick hacks, and a native amount of RAM, all elements that we will deepen in a bit.


You will get Cyberdeck better with higher stats you give Scalpel that you will find throughout Night City, in exchange for Eurodollars. For the better versions, in addition to shelling out quite a few Eddies, you'll also have to meet certain requirements of Reputation. Open the inventory and select the menu "Cyberware”To view an overview of the Cyberware. Move the cursor to Cyberdeck equipped in the section "Operating System"And check the following values:

The size of the buffer determines how many numeric values ​​can be loaded into the Cyberdeck during the violation protocol. The larger the buffer, the longer the possible number sequences will be, thus making it possible for more hacks to be executed simultaneously.

Each quick hack performed consumes a number of points RAM, depending on the type and strength of the quick hack. The greater the RAM maximum contained in yours Cyberdeck, the more quick hacks you can perform at the same time. Once a quick hack is performed, the amount of memory RAM required to run it will be consumed and will need to be recharged. You can increase the regeneration speed RAM via perks, Skill Rewards and Cyberware Specials. You will be able to see yours RAM total in the character overview under "Stats"By clicking on the bar"Health".


Starting and mastering the hacking puzzle of the violation protocol

The violation of the protocol is the cheapest hack you can use to get a bonus RAM while in enemy networks, be it people or devices, or to extract money and components from terminals. Connect to a terminal or hack a device or enemy to initiate the violation protocol. 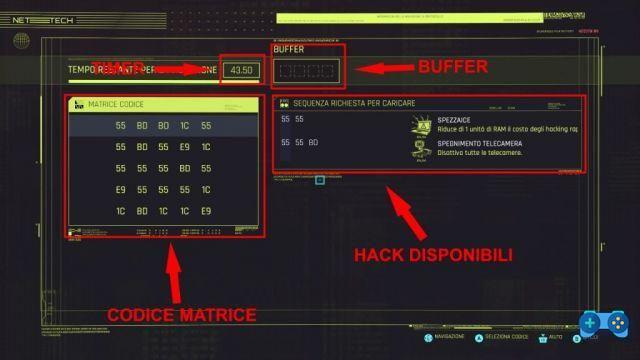 Your task in this puzzle is to find the combinations of numbers and letters that correspond to the hacks available in the Code Matrix on the left and activate them in the order that suits you best.

If you want to run multiple hacks at the same time, you'll need to plan your route through the code matrix so as to activate all the necessary codes one after the other. If the buffer in your Cyberdeck is big enough, you can try to connect all available hacks. However, this usually requires a buffer of five spaces.

The last part of a code sequence can also serve as the first part of the next sequence. This will save you space in the buffer in case of two compatible hacks. This will be especially useful at the beginning of the game, when you don't have it yet Cyberdeck more powerfull.

The violation of the data protocol fails in the following cases:

Start scanning the environment and targeting an enemy or device to see which hacks are available to choose from and how many RAM it costs every hack. More RAM is available through Cyberdeck, benefits and equipment, more options will be available when interacting with the environment.

When hacking a network that connects multiple enemies, the protocol is worth using Quick Breach to have cost in RAM lower for the hacks to follow. The ultimate quick hacks such as "Cyberpsychosis","Suicide"Or"Detonates Grenade“They require a lot of memory, but they can eliminate enemies instantly. 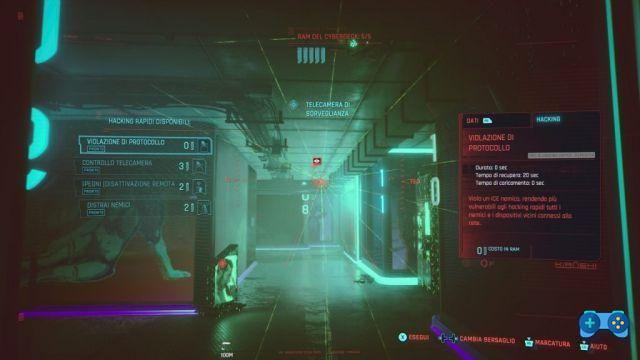 Decide according to the situation whether you want to use many minor hacks or some powerful ones, to avoid wasting all the possibilities too soon. Alternatively, for hacks like "Freeze movement","Failure Cyberware"And"Weapon hitch“, You can use the quick hack variant; this will cause enemies within a radius of eight meters to be hacked. "Contagion”Already has this uncommon variant and hits two additional enemies.

The most important attribute for all Night City netrunners must be "Intelligence".

In this guide you will find some particularly useful and essential talents for the success of Netrunning and hacking. You can upgrade some of these talents multiple times.

Council: use the “Memory Boost” consumable for a temporary increase of RAM of 2 units.

Cyberdeck (OS): Check the i Cyberdeck available when a new one Scalpel appears on the map. If you have enough Eurodollars, buy the more powerful version. More units RAM, the more options you have for hacking. We recommend that you save your money on the purchase of an epic or legendary operating system, or meet the required requirements (mainly character attributes and Reputation).

RAM expansion (Frontal Cortex, Intelligence 8): Get this upgrade if the regeneration rate of yours RAM it is not enough for you.

Memory increase (Frontal Cortex, Intelligence 7): this Cyberware allows you to recover drives RAM after neutralizing an enemy, giving you a steady stream of RAM also in the basic version. Useful if you often kill enemies through hacking.

Ex-Disk (Frontal Cortex, Intelligence 10): Increase the amount of RAM, however, all variants are expensive. It is preferable to update the Cyberdeck / Operating system.

Tyrosine injector (Circulatory system, Reputation 12): The injector increases the duration of the violation by 100%. Only useful if you can't solve the hacks in the time limit. 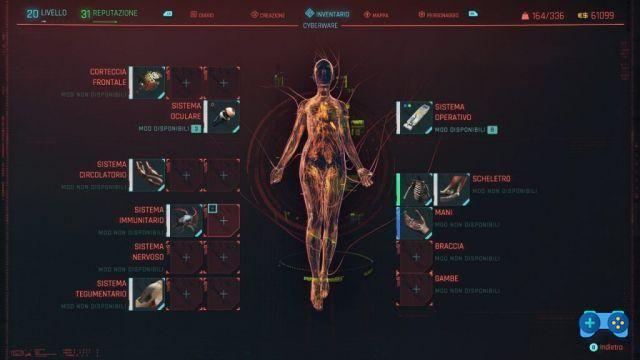 Especially during combat, it's worth scanning enemies for their resistances and choosing hacks that exploit their weaknesses. Check out the four Netrunner shops around town for basic equipment with several quick hacks. 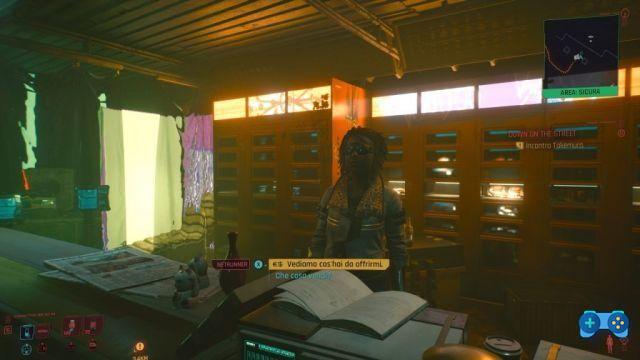 You can purchase new quick hacks from netrunners in various qualities, including legendary ones. In the table below you can see the list of quick hacks, their rarity and which netrunners have them. Use the numbers in the two tables to find the seller.

If you have a few more Eurodollars to spend, it would be a good idea to buy the better version, as it adds useful effects to the base ones. Try to find your way around hacks that can spread to groups of adversaries.

Please note:: Before purchasing, check your inventory e Cyberdeck to see which hacks you already have available, as at the moment, the shopkeeper will not indicate if you have or have equipped such a hack.

Another way to get new quick hacks is through the talent tree "Protocol Violation", Which is part of the attribute"Intelligence". Depending on your Intelligence value, you will unlock one or more perks by using talent points. You can later use the corresponding hacks in the game.

Quick hacking and bonuses through talents

You can get the necessary components via "Data Extraction”At access points, or loot them from enemies or chests. Some quick hacks are already available at the rarity level "Uncommon", While others can only be found in the variant"Epic".

Fast top level hacks require you to have the previous level of the same hack. You can then improve it with the corresponding update. The exceptions are quick hacking of which there is no variant "unusual"And / or"rare“: Using the build specs of these quick hacks then creates a whole new hack.

If you liked our guide, take a look at the other specials and guides dedicated to Cyberpunk 2077 that you see in the list below. If you are looking for clarification, suggestions or simply want to talk about videogames, come and visit us on our social networks Facebook e Instagram and join ours Telegram channel.

Do you want to complete all the achievements and trophies and know all the tricks, guides and secrets for your video games? SoulTricks.com is a group of video game fans who want to share the best tricks, secrets, guides and tips. We offer the best content to be a source of useful information, so here you can find guides, tricks, secrets and tips so you can enjoy your games to the fullest. Are you ready to get all the achievements of that game that you resist so much? Enter and enjoy your favorite video game to the fullest!
Hitman 3 review ❯

Hollow Knight, guide and lore: City of Tears I

Crash Bandicoot 4: It's About Time - How to get the Yellow Gem

FIFA 21 - FUT Ultimate Team, everything we know about the Rulebreakers