FIFA 21, the best base-average Icon under one million - Defenders 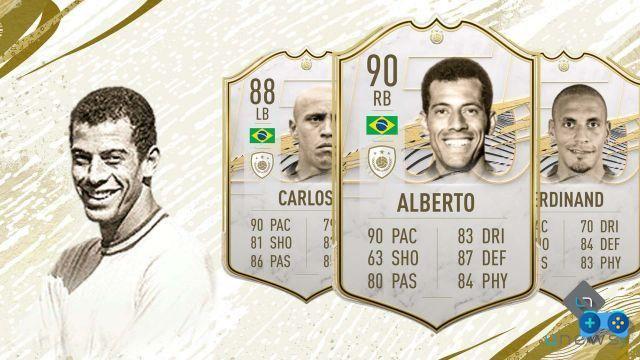 The universe of FIFA 21, as the recent history of the brand has taught us, it is constantly evolving. EA Sports is releasing, even quite frequently, many new cards. Very often they are able to shift the balance of a game whose competitive aspect is becoming something more and more elitist.

However, not everyone likes these special cards. Many players, especially the old ones, have repeatedly expressed a bit of perplexity towards the latter.

Fortunately, however, the Icon, the much loved cards dedicated to the old glories of the past, thinks everyone in common. Some of them are seriously able to shift the balance of entire teams. Being able to use the services of the so-called "Legends" is not, however, a simple thing. The price of the latter is not exactly "nice", at least not for some players and in some versions.

Consequently, we have decided to draw up a ranking of the best Icons divided by role, but without aiming for the best ones (more on that later). We will therefore limit ourselves to the “cheaper” ones, that is, those that amount to under one million price credits and that concerning the basic and medium versions of the aforementioned Icon.

You are ready? Let's start!


Please note: - next to each player you will find the relative purchase price. The one on the left refers to the PS4 version, the one on the right, the Xbox One version!

Please note: The price is subject to change.

A good team, especially for FIFA 21 gameplay, definitely starts with a good defense. This year it has in fact become one of the most important characteristics and able to separate a good player from a phenomenon.

Obviously, probably having the appropriate economic availability, few would point to a defender as the very first high-budget "shot", even rightly so.

However, considering the current state of the market, being able to place a major incoming purchase, with a few weeks of play and a bit of luck, is not exactly impossible.

For this reason, one of our very first tips, having also extensively tried the aforementioned player, is that relating to the purchase of Laurent Blanc. The latter turns out to be one of the strongest players we have had in our hands in recent years.

In its version Media, therefore more oriented to the role of central defender, the giant of the French national team is probably one of the best in his role and certainly the best among the Icon under the million credits of this FIFA 21.


Blanc manages to join one almost perfect defensive phase at a much faster speed than that written on the paper. It also has aagility and a rapidity of movements difficult to find in other central defenders, especially considering his size.

To seal it all there is then, which should not be underestimated, its great ability to passage. This feature also makes Blanc perfect for those who (like myself) prefer to set up with defenders and not sweep the ball into the void once it has been recovered.

Basically, and we repeat, under one million credits Blanc is perhaps the best choice in the role of central defender, especially for those who defend in a very manual way and cannot take full advantage of autoblocks, and more generally does not cling to movements automatic of the best defenders. 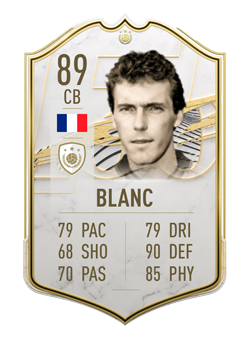 Same role but attitudes and ways of interpreting the defense for what - in our opinion - is the second best Icon central defender under one million credits, belonging to the Prime and future Prime Moments group.

We are talking about Rio Ferdinand, in its basic version, a card that manages to combine in an incredibly surprising way speed, physicality e defensive skills, a perfect combo for the role. Unlike the others, in fact, this basic version gains a lot in speed and loses slightly in defense. It turns out in any case, in game, of an impressive solidity.


The English legend is almost perfect in practically all respects. Among them stand out in particular the "lateral" speed, pass us the term basketball, that is the ability to follow the man during the marking with the key L2 pressed (or LT) and, of course, physical power. This feature makes it almost impossible to overcome in one-on-one and above all very complicated to get around during offensive actions.

Unlike Blanc, he is also able to defend more "alone", having a series of automatic movements that are decidedly more "massive" than his colleague. 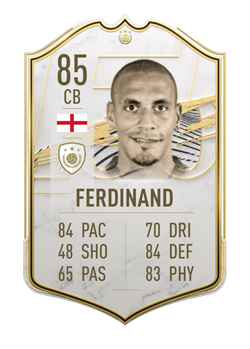 The very first alternative to the two "tops" listed above is undoubtedly ours Fabio Cannavaro. This card, in the basic version, represents one of the most valid and enviable elements of the Icon group.

The good Fabio does not have the physical or the ability of Rio ball and chain or the control of the body of Blanc. On the other hand, it has an agility and a speed of reaction that are certainly above average. These, combined with defensive stats of the highest level (all from 87/99 upwards), making it a real thorn in the side for any opponent.

We know, you are all thinking that he is faster, more agile and defends well and costs even less, right? And you would also be right, but there is a factor that inevitably relegates it to a "secondary" choice compared to the other two.

Let's talk about the physique, especially the height, since its 176cm by 73kg they make it too small and light to compete with opposing forwards. Sure, the body type helps him and most players use sprinters in attack his speed, so it might come in handy. Trust me though: the height and above all the lack of aggression (only 77) for such a player feel too much. 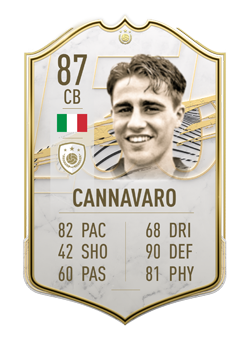 Moving from the central to the external part of the defense it is impossible not to pass through the "feet" of Roberto Carlos. The former Real Madrid star is certainly one of the strongest players in the role within the price range we have decided to look into.

Roberto Carlos, leaving out the average workrate in defense, it is as it was also in reality, truly amazing. In fact, we are talking about a real mastiff in the middle of the field, a player able to appropriate the left wing both in the offensive and in the defensive phase without too much trouble.

Agility, dribbling e physical force are the strengths of good old Roberto. However, it is flawed from the point of view of physical strength. In this player version, this stat is sometimes insufficient to stand up to some players.

Overall, if you are looking for a super valid full-back in both phases, especially if you are used to pushing on the flanks, the good Roberto Carlos can be your extra weapon, especially considering also the Brazilian nationality, which also guarantees him excellent links. . 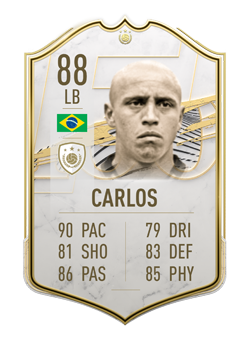 Very different speech regarding our second choice for the role of left-back, that is Paolo Maldini.

The former AC Milan flag, in fact, is a completely different full-back from Roberto Carlos. It is perfect for all those who prefer to defend strong and "low", without leaving offensive space for their full backs. Maldini, also in this version, is often deployed as a central defense, precisely because he has more in the defensive phase and in the ability to read offensive attacks opponents more than in the thrust on the flanks (the workrate high defense medium attack is a confirmation) their strengths.

Maldini is therefore perfect for those looking for a reliable man on defense. The player has all the statistics relating to the aforementioned branch of the game above 90. It is therefore almost impossible to jump both in one on one and in the more intricate actions in your own half. Of course, it's not exactly lightning, and so it could be blown, especially in the long run, by those quicker exteriors. It does not have a very high resistance, but we are ready to bet, without any doubt, on its qualities. 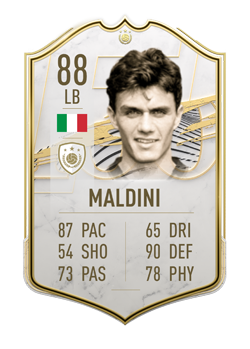 If there is a complete full-back able to truly unite all the fundamental characteristics of the exponents of the role, that is certainly it Carlo Alberto, also known as capita.

In his medium version, which currently costs around 700 credits on PlayStation, the former Brazilian champion represents the perfect full-back, thanks to a series of incredibly valid statistics.

Card in hand, in fact, Carlos Alberto has all the characteristics of the perfect full-back: defense, speed and physical strength, combined with excellent resistance and feet certainly more than polite.

The only problem could be represented by the average workrate in the Defense item. We can assure you, however, that in the field this is not felt that much, on the contrary. Then, as we said above, if you are among those who prefer to push with full backs, Carlos Alberto is exactly the man for you, even considering the excellent links typical of Brazilian nationality. 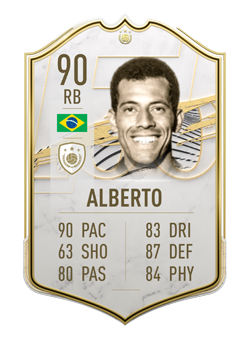 Cheaper alternative but still more than valid and above all with very similar characteristics to Carlos Alberto is represented by our Gianluca Zambrotta, one of the most used icons in FIFA 20 and who also in this FIFA 21 returns in better shape than ever.

The stats between the two players are in fact virtually identical and the workrate is also exactly the same. All this makes them very similar both on paper and on the pitch. The major differences between the two reside in the physique, whose statistics are slightly in favor of Zambrotta, who however pays duty slightly in defense, an aspect under which Capita proves to be a little more solid.

But what we feel like saying about Zambrotta is that, at least in some moments, the player seemed discontinuous and not very focused on some readings. This is not to be underestimated when buying, as it could alter your choice in some way. Overall, however, the former Juventus is certainly one of the best exponents of the role and, frankly speaking, it doesn't even cost that much. Perhaps for this reason it could be more attractive than Carlos Alberto, who, however, has perhaps a greater solidity on his side. 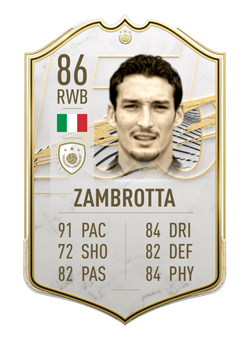 For this first appointment with the best medium and basic Icon of FIFA 21 under a million credits, relative to the defenders, that's really all.

With the hope that this article will be to your liking and above all useful for the construction of your team, we invite you to give us your opinion on it and we refer you to the next article, in which we will examine them: the midfielders.

add a comment of FIFA 21, the best base-average Icon under one million - Defenders