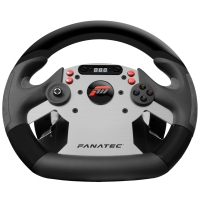 A product for true enthusiasts.

After the great success achieved with the Porche 911 Carrera steering wheel, Fanatec, a leading company in the market of driving simulator products, today presents an entirely branded version for Forza Motorsport 4 called own Forza Motorsport CSR.

Both the steering wheel and the pedals, as well as the manual gearshift lever, are awarded the Turn 10 FM logo and are available immediately.

(Los Angeles, CA) - September 26, 2011 - Fanatec®, a leading manufacturer of high-end input devices for game consoles and PCs, today announced that the Forza Motorsport CSR Wheel, CSR Elite Pedals and CSR Shifter set are now available for pre-order. Fanatec has partnered with Microsoft and Turn 10 Studios to develop the Forza Motorsport CSR Wheel for hardcore racing fans who demand nothing less than perfection on the Xbox® 360 ™.


Making its debut at the 2011 E3 Expo in Los Angeles CA driving Forza Motorsport 4, the Forza Motorsport CSR wheel takes the Fanatec line in a new direction with a different look and feel to the familiar Porsche® 911 line up of products. Developed by Fanatec in collaboration with Turn 10 Studios, new features are set to provide the ultimate sim racing experience on the Xbox 360 in Forza Motorsport 4.

The CSR Elite Pedals are the most affordable set on the market that use load cell brake technology. With a load cell, muscle memory is used versus positional memory as the load cell is engaged. Load cell brakes are used to simulate the feel of a real world car. With a vast array of adjustability, you can make the CSR Elites load cell brake go from something similar to a street car, up to a very stiff racing brake.

A great wheel needs an equally impressive pedal and shifter set and Fanatec delivers just that. The Forza Motorsport CSR wheel, CSR Elite pedals and the CSR Shifter Set continue that tradition and Fanatec continues to be the only company that brings you a quality wheel, pedal and shifter set for the Forza Motorsport franchise and the XBox 360. This time you ' ll be able to do it with official Forza branding and a list of new features.


Key features for the wheel, pedals and shifter include:

* note: USA Prices do not include local sales tax. EU prices include VAT

The Forza Motorsport CSR Wheel, Pedal and Shifter sets are available at the Fanatec web-shop located at http://www.fanatec.com, while supplies last.

Do you want to complete all the achievements and trophies and know all the tricks, guides and secrets for your video games? SoulTricks.com is a group of video game fans who want to share the best tricks, secrets, guides and tips. We offer the best content to be a source of useful information, so here you can find guides, tricks, secrets and tips so you can enjoy your games to the fullest. Are you ready to get all the achievements of that game that you resist so much? Enter and enjoy your favorite video game to the fullest!
Resident Evil Village shows itself in new screenshots ❯

How to see PC temperature on Windows 10 and Mac