The Witcher: a look into the world of Geralt, beyond the Netflix series 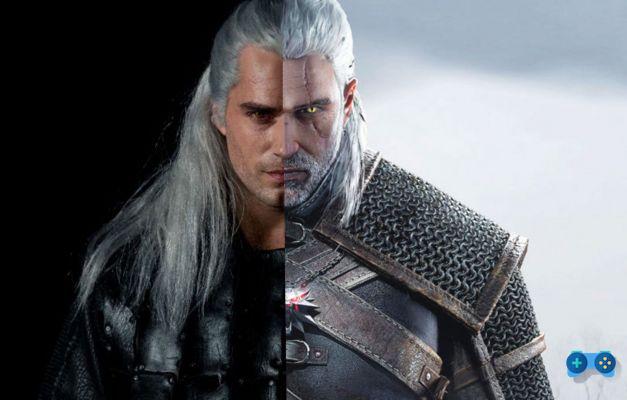 Netflix show The Witcher has quickly become one of the most popular ever. The world of the witcher, however, had already existed for a long time and the stories related to it expand on different narrative mediums.

The most followed TV series of the moment is, once again, a dark fantasy drama based on novels that have sold millions of copies. This time however you will be amazed to know that the history of books has already ended before the show ends! But not only that, it was also drawn from these novels a series of video games. With the second season already planned and the renewal for a third already signed, it is worth analyzing the various versions of Geralt of Rivia, printed and otherwise. For all those who, bewitched by the sumptuous 'The Witcher' want to deepen its history.

The author of the novels and creator of the character Andrzej Sapkowski he became the pride of Poland by having published a series of short stories about Geralt of Rivia. The nation is so proud of the writer's work - and the video games made by the Polish studio CD Project Red - that the prime minister in 2011 “gave away” the second game in the series as official gift during the visit to President Obama.


Since the show's debut on December 20, both the series books and The Witcher video games are back at the top of the charts of sale. "The guardian of the innocents“, The first collection of short stories originally published in 1993, became the fourth best-selling title in January for the New York Times. Sapkowski is now regularly among the most popular authors on Amazon, even above JK Rowling, author of Harry Potter.

On the other hand, on the gaming front, The Witcher 3: Wild Hunt, CD Projekt Red's 2015 video game, is once again one of the most played titles on Steam. The game over the past weekend has come to have more than 91.000 active users. In addition, an employee of the Polish studio confirmed that this is a higher number than seen at the launch of the game four years ago. The title is still one of the most beautiful and popular video games of the decade and of this generation of consoles. This renewed fame, however temporary and due to the Netflix show, is nonetheless positive.

Have you binge-watched the series at this point, read all over the place that the novels and games are all great, and are you looking for a multimedia guide to the world of The Witcher? In this article you can find everything you need for delve into the stories of Geralt of Rivia and of the world outlined by Sapkowski: strange, violent, sensual and often satirical, but always deeply fantasy.

The Guardian of the Innocents

As indicated by the New York Times bestseller list, many readers have already realized that the best starting point for novels is “The Guardian of the Innocents”. Although this collection of short stories was published after "The Sword of Destiny”(1992), chronologically ranks first.

Each of the stories that make up this collection was previously published in some Polish magazines of fantasy stories. They were later collected in this book, but it only arrived in English many years later, in 2007. More interestingly, this book appears on the New York Times bestseller list for the first time in 2015, after the launch of the game The Witcher 3.

“The Guardian of the Innocents” is a quick, fresh, action-packed read that follows Geralt in some flashbacks of past adventures. Many of these have been used in the Netflix show, Moreover. This collection of short stories offers an excellent opportunity to learn more politics of the world of The Witcher e the various factions at stake in the war. In fact, the series has minimized the political intrigues present, perhaps also to avoid an already obvious confrontation with Game of Thrones.

The Sword of Destiny

Continuing with the reading "The Sword of Destiny" should be your second reading. One of the main criticisms leveled at the show are yours different timelines, which created confusion in many viewers who approached the world of The Witcher for the first time. The choice to tell the story in this way has been explained several times by the director, but it also involved big cuts.


In fact, although this second book (in the chronology of the plot) completes with the first and delves into the characters of Geralt and Ciri, much of it has been cut in the Netflix series. The showrunner justified herself on Twitter in this regard by explaining that the alternative would have been to postpone the presentation of Ciri at least to the second season.

I hear you. And we debated this intensely. Here's our rationale: to adapt the short stories that were important to world-building, and then to sequentially adapt Geralt and Ciri's multiple meetings in SoD meant that we wouldn't introduce Ciri until (at the earliest) season two. https://t.co/wpDi96hupV

From here on you can simply read the novels of The Witcher saga in the order of publication: "The Blood of the Elves","The Time of War","The Baptism of Fire","The Tower of the Swallow"And"The Lady of the Lake". It is not known how faithful the show will be in recreating these novels, in particular regarding some characters that in the series have already been drastically changed. For example, Triss Merigold plays a marginal role in the books and is not introduced before the novel "The Blood of the Elves". In the series, however, he is a main character by virtue of his importance in the video game series.

If you don't want to wait years until the end of Netflix's 'The Witcher' you can read the story of Geralt until its conclusion in “The Lady of the Lake“. Or at least that was the end until the video games arrived ...

Let's start right away by answering the most frequently asked question: yes, you can start directly with The Witcher 3: Wild Hunt. In fact, it's probably best to do that. 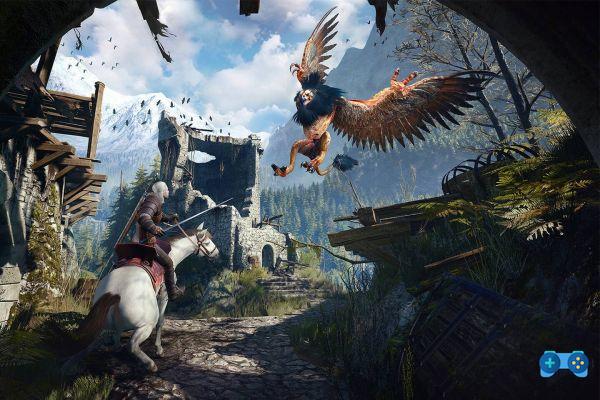 The Polish development team was able to bring Geralt's story beyond the end of the series of novels. Although the author, Sapkowski, has repeatedly reiterated that the games are not canonical in the world that he has told, as many times he has said that he is very happy with how the latter treat his characters. It was not easy for the developers to replicate the speeches and aesthetics of many of them described in the books.

The first game in the series is a PC exclusive from 2007, and although it was used as a benchmark at the time, hasn't aged well. While the storytelling is still of high quality, the gameplay is simply too old to be fun for the general public. If you're not a huge fan, your time would probably be better spent watching a YouTube walkthrough or even a compilation of the game's cutscenes.

In addition, the Netflix series directed by a woman has been very careful in the representation of female characters. In contrast, the first game in The Witcher saga is very male chauvinist in the management of sexual relations, in an attempt to gamify the latter. It is probably best to leave certain mechanics in 2007, especially since CD Projekt RED itself later developed a much more meaningful system of building relationships in subsequent games. And less sexist, too.

The Witcher 2: The Assassins of Kings

The second chapter of the videogame series is definitely on another level. The Witcher 2: Assassins of Kings is released in 2011 for PC and later also Xbox 360, while it never made it to Sony consoles.

This title is already completely different from the first one. The game mixes one tree story which branches out according to the choices of the player with a combat system vaguely inspired by that of Dark Souls - although much less successful, mind you. Unlike the third installment, The Witcher 2 is more linear. On the other hand, compared to the first it is more concentrated on the politics of the game world, rather than monsters and spells. While it's nowhere near the quality level of the third episode, the game is very good value. Just think with your choices you will determine over a third of what happens in history.

If you are a fan of adventure games full of dialogue and narrative crossroads, The Witcher 2 may be worth your time. And also the effort to overcome the frustrating combat system. 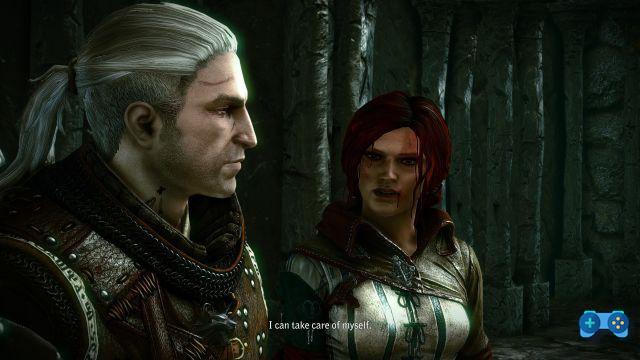 The third installment of the series is highly recommended. A game so well done that the first two chapters are unnecessary.

In the first two episodes of the saga Geralt was written as suffering from amnesia in order to better introduce the narrative universe to the player. Instead in this third chapter his memory has - magically - returned. The protagonist is basically as we left him at the end of the last novel "The Lady of the Lake". The game's story also introduces many new characters, previously only seen in books.

While the main story is well written and engaging, the most amazing aspect is the size and quality of secondary missions. Get lost on the continent by exploring the huge map and diving into the purest role-playing game, in the shoes of a witcher, is one of the most significant videogame experiences ever. Each story is an episode unrelated to the others, each with important moral choices and each with something to tell. In addition the game offers a easy mode for all novices, which can allow even casual gamers to enjoy the game without much effort. 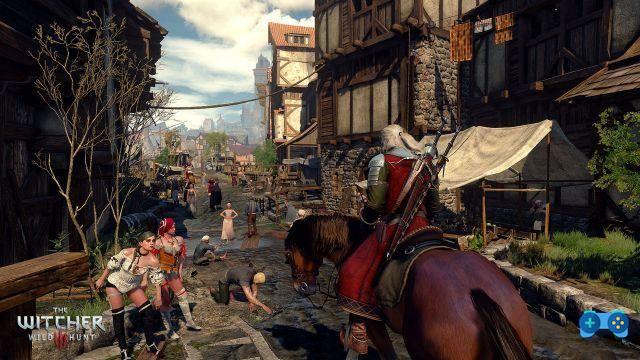 Finally the game provides an ideal ending, letting the player choose. Already the main story of The Witcher 3 ends satisfactorily, but the two DLCs Heart of Stone and Blood and Wine they provide an even more convincing closure to the witcher story. In conclusion, there is no risk of a fiasco as for Game of Thrones: the best ending already exists.

Do you want to complete all the achievements and trophies and know all the tricks, guides and secrets for your video games? SoulTricks.com is a group of video game fans who want to share the best tricks, secrets, guides and tips. We offer the best content to be a source of useful information, so here you can find guides, tricks, secrets and tips so you can enjoy your games to the fullest. Are you ready to get all the achievements of that game that you resist so much? Enter and enjoy your favorite video game to the fullest!
FIFA 21, everything we know about the Web App ❯

The Simpsons, 30 years of animation history

Netflix will add 21 Studio Ghibli movies to the catalog

Add a comment from The Witcher: a look into the world of Geralt, beyond the Netflix series