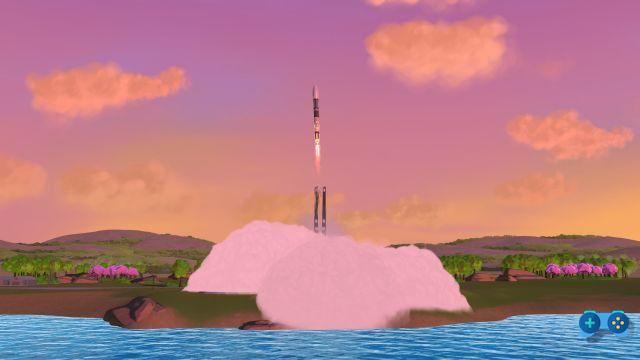 Touching the sky with a finger has never been easier, thanks to the work done by the Auroch Digital guys in Mars Horizon, a title developed in collaboration with ESA (European Space Agency).

Since the dawn of human civilization, man has dreamed of exploring the celestial vault, and illustrious men of science have risked so much to be able to discover what was hidden beyond the blue blanket that welcomes us. In recent centuries, this curiosity has increased, and the discoveries in the astronomical field have been sensational and remarkable.

Even in the cinematographic field, the productions in the "stellar" field have always been positively received by the public, just think of the blockbuster Star Wars and Star Trek, the more recent Interstellar. In the gaming field, then, the scene is dominated by Destiny 2, while No Man's Sky is offering a more romantic experience. Light-hearted at times.

Mars Horizon is placed in this context, offering a space management software that has as its ultimate purpose the landing on Mars. All seasoned with the support of the European Agency, ESA.

As soon as the game begins, it puts the player at the first fork. In fact, you will have to choose to put yourself at the head of a space agency. The choices seem limited (Europe, United States, China, Russia or Japan), but the possibility of creating your own offers much more freedom than there might seem to be.


The first missions, of course, are introductory, and serve to make the player understand the gameplay and management mechanics that he will then have to develop. The "shifts" of the game are managed month by month, and will force the user to plan investments, to make him concentrate on preferred technologies and to have him carry out data collection operations. All this will allow to obtain funds to expand and finance stellar exploration. Furthermore, based on our choices, relations with rival agencies will also change, from friendly to competitive and vice versa.

Each time, after the player has set the active mission, it will be mandatory to set the actual launch. The requirements of this procedure include calibration of resources, building rockets and ancillary tools, and / or upgrading your base of operations.

Although the construction itself is not overly complicated, the large presence of components and parameters is so high that the modifications - fortunately - are not reduced to a simple "put and lever" from time to time of the best parts.

The launch of the rocket is also not a simple push of the right button, but it is influenced - positively or negatively - by a series of random parameters. All these factors will affect the ability to collect data flawlessly, sometimes forcing the player to have to repeat the operation in the following months as it did not go too well.

In Mars Horizon, the construction and improvement of its operational base is an excellent diversion to expand the play offer. The real gem, then, lies in the synergy between the buildings; in fact, each construction will inevitably have a positive or negative influence on its complementaries and opposites. Deciding to install a certain area over another will allow the gamer to customize his base in a unique way.


All this process will lead to comparison with the other space agencies already present. These will not be a speck in the background; in fact, to achieve certain objectives we will have to collaborate and / or hinder our opponents. Furthermore, for each event there is not a single correct answer; therefore, every choice is truly left to the taste of the gamer, who will have to bear and act according to the weight of their choices.

Mars Horizon, also given the limited budget, presents itself in a really poor graphic format, despite the fact that in the hubs it manages to give some noteworthy images. However, this is not enough to relaunch a graphics sector that does not come out superbly, to put it mildly.

The sound sector, on the other hand, offers a really well-written OST, despite the fact that in the economy of the title it appears as little more than a nice background and you never have the sense that it is present and important to follow the events of the title.

Mars Horizon is a great game. It offers a typical management gameplay, but unique in the space genre. The interactivity of the CPU is really well developed, so much so that it is considered the highlight of the title. For lovers of the genre it is a must have, and for those who want to introduce themselves to this category it is certainly an excellent springboard. Too bad that the graphics sector could push a little more, but it is forgivable in the economy of the title.

Do you want to complete all the achievements and trophies and know all the tricks, guides and secrets for your video games? SoulTricks.com is a group of video game fans who want to share the best tricks, secrets, guides and tips. We offer the best content to be a source of useful information, so here you can find guides, tricks, secrets and tips so you can enjoy your games to the fullest. Are you ready to get all the achievements of that game that you resist so much? Enter and enjoy your favorite video game to the fullest!
LEGO Review: The Hobbit ❯