The Birth of Handsome Jack.

The revolution brought to the world of FPS since the first, very original, appeared Borderlands it was a real breath of fresh air: an irrational world, full of irony and fun, lots of weapons, enemies and so on, accompanied by a game system RPG and a very nice robot to keep us company. The second chapter of Borderlands has enhanced the functionality of the first and created a new, even more original masterpiece. The first innovations of Borderlands were eclipsed by those inserted due to Borderlands 2, between the possibility of a wider loot and an improved game system that accompanied the new cast of characters full of personality. Gearbox he had hit the mark. The choice to create a Borderlands different rather than releasing a third official chapter, however, turned out to be a wrong choice: we present you Borderlands: The Pre-Sequel or, if you prefer, Borderlands 1.5.

Uploaded from a hilarious and now classic opening video of the series, Borderlands: The Pre-Sequel introduces us to the new cast of characters, among which the brand new one stands out Fragtrap, deadly edition of the cute robot CL4P-TP. Our adventure will be lived with every priority on Luna di Pandora, however it will start within the Space Station Helios, where due to a call by a programmer of the Hyperion, the future Handsome Jack, we will find ourselves investigating the causes of a disturbing signal that, precisely, is on the Pandora's Moon. Do not expect anything exciting from the plot of the title, as it will be as dull and banal as it hasn't been seen for a long time and will be able to dampen your enthusiasm after a few hours, when you have already learned the boring game mechanics.

Exploration with the timer

What we believe has always characterized Borderlands, for better or for worse, it was that sense of freedom e lightheartedness which allowed us to explore the infinite scenarios that were proposed to us. Borderlands: The Pre-Sequel kills this feature by inserting a mechanic related to theoxygen, effectively cutting the legs of the most adventurous players who like to waste time in the infinite expanses of the game in search of a small corner of earthly paradise in which a precious chest containing weapons can be hidden. In order to survive in the outer parts of the Pandora's Moon, in fact, it will be necessary to be in possession of the precious oxygen, which can be recharged using the appropriate ones oxygen supplies marked on the map or through gods natural deposits of the same.

During the first hours of the game, the functioning of the oxygen mechanics will not seem to greatly affect the gaming experience, however as you go on it will become a considerable burden: we have found ourselves dying over and over again falling into an abyss when, believing we had enough oxygen, we tried to jump over it by exploiting the power of propulsion of our oxygen kit (yes, because ours kitOoxygen it will also be our "jet pack"And will use the same raw material for operation, oxygen precisely). This game mechanic requires a lot of patience and becomes tedious in the long run. Note that the Fragtrap DON'T will need oxygen to be able to wander on the moon, therefore we recommend its use in case you are that type of player who loves to explore.


Borderlands: The Pre-Sequel it is not a title that wants to innovate or renew the proven game system of the two previous chapters of the franchise, but takes Borderlands 2 from every point of view and proposes it again with new characters and new game scenarios; also from the graphic point of view, which we will analyze later, the title does not stand out particularly and the game menus remain unchanged by giving a sense of dejà-vu to those who have already played the predecessor.

The rule that gives the title to our paragraph has always turned out to be true by playing in co-op on Borderlands e Borderlands 2; this time, however, something went wrong. We do not know what it is, yet the cooperative in Borderlands: The Pre-Sequel it is less fun and hectic than in previous chapters. Perhaps it is simply a matter of exhaustion, as playing the title feels as if you are playing an expansion of Borderlands 2 rather than a completely new chapter, or it is simply the game system that somehow seems slowed down by the absence of gravity on the Moon: a slower run, weapons never as fast as in the past ... Whatever the reason, it remains the made that multiplayer gaming experience on Borderlands: The Pre-Sequel it didn't hit us, on the contrary, it just left us with a bad taste in our mouth.

As if it wasn't enough to re-propose the sequel to the first Borderlands from the point of view of gameplay, even graphically Borderlands: The Pre-Sequel remains unchanged, with the same graphic style and the same polygonal models as always to keep us company. At a guess we also spotted some recycled textures here and there. However, the performance of the title has significantly improved, so we think it is a simple optimization of the graphics engine. From the point of view of the audio sector, we will be accompanied by a soundtrack worthy of the best Borderlands, but it will be all that will remain imprinted on the technical sector of the title which, we repeat, remains subdued. We consider, however, that this is not a budget title, but a real chapter of the main-line of the franchise. 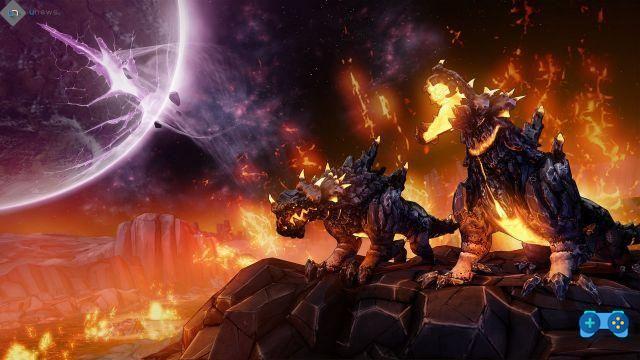 Borderlands: The Pre-Sequel it is a product that must be analyzed before being purchased. This is a title not at the levels of the previous exponents of the franchise, it does not revolutionize and anyone who has played it Borderlands 2 he will soon get bored as the title, rather than being a separate chapter, looks more like an expansion. Accomplices of everything are then a subdued technical sector and the classic irony of the franchise that is missing, except for some game scenes.

It is a period full of news in the videogame field, but Borderlands: The Pre-Sequel it may not be for you, even if it is a very enjoyable gaming experience. We therefore advise you to patiently evaluate the purchase of the title, since in any case we are not talking about a budget title.