The hero that Gotham deserves.

Four years after that Arkham City that has reinforced the myth of a studio capable of forever transforming the way superheroes can interface with the medium of videogames, after years of scandalous tie-ins, Rocksteady presents the final chapter of the Arkham trilogy after the apocryphal parenthesis of Arkham Origins.
Batman: Arkham Knight it is certainly the most ambitious operation in which the software house has ventured: to give a worthy conclusion to one of the most popular videogames sagas of the past generation, to relate to hardware that is still relatively young, but above all to innovate a gameplay that seemed to have given everything . The operation, we say it immediately, was successful all too well and indeed the majesty of the title could even leave you blown away.

The mind does not resist beyond a certain point

The title opens unexpectedly, in the niche of a morgue where the Joker is about to be cremated. Six months have passed since the events narrated in Arkham City and Talia's killing of the Joker has deprived Batman of his historical nemesis, without which many believe there is no longer a need for the Dark Knight.


However, a new, ancient enemy is at the gates of the city, and this time his threat is the greatest the bat has ever faced. The Scarecrow in fact he managed to synthesize a new and very powerful killer toxin capable of disturbing the psyche of the unfortunate victims to the point of pushing them into a vortex of homicidal madness. The Scarecrow threatens to strike the entire city thanks to the support of an army and a mysterious new character, the Arkham knight. There is no doubt that the threat feared by Crane clearly traces the one that in Batman Begins (initial chapter of Nolan's trilogy) Raz Al Gul addressed to the city of Gotham with the help of the Scarecrow. However, if in the aforementioned cinematographic work the impression is that of witnessing the birth of a hero, in Arkham Knight the atmosphere appears almost one of resignation, of tacit acceptance of that ultimate sacrifice that is required of every hero.

Batman: Arkham Knight, if we exclude a first phase in which the narrative appears a little too slow and fragmented, perhaps also due to the many new elements of the gameplay introduced in this chapter and which Rocksteady wanted to show off right away , transports us in a profound and masterly way into the fears and insecurities of the man Bruce Wayne and his masked counterpart. These fears are personified in the figure of the Joker, who after exposure to the fearsome toxin of the Scarecrow will manifest itself in the mind of our hero, becoming his dark side, an aspect that has been hidden and imprisoned for too long and now eager to take the part that it is up to. Our Batman entangled in his fears, in a vain attempt to defend everyone, like this as in Dark Knight Rises it seems to yearn for death, understood as the last act of liberation and necessary sacrifice.


Can you have it black?

To a plot that between twists and changes of points of view could initially disorient the gamer, is added a gameplay that has now reached such a vastness that it can only be enclosed with enormous difficulty in the stylistic features of the classic action game. Sure, there is the Flow Combat System, now the trademark of many titles of the publisher Warner Bros., here made even more effective by those who created it; there is stealth combat, a gadget upgrade system that touches the mechanics of Western-style action RPGs, but above all there is a huge open world, a city that, although abandoned following the threat of the Scarecrow, is still full of Things to do.

Thinking you can move in this huge open world, five times larger than that of Arkham City, simply using the grapple was ridiculous, and that's why the Batmobile it is not only a pleasant novelty, but a real necessity. But it's not just a question of travel. The traditional gameplay mechanics studied by Rocksteady seem to bend before the cumbersome presence of the Batmobile, not only a means to move from point A to point B, but an essential element to overcome obstacles or enemies, solve environmental puzzles and get Batman out of solutions apparently with no way out. The Batmobile, in fact, can be controlled remotely to get around enemies and provide assistance during the combat phases. Furthermore, it can be used to open inaccessible passages or supply electricity to electronic devices thanks to a special electrified grapple. Finally, the grapple itself can be used to lift objects, destroy pipes and allow the passage of our hero. All this gives an enormous variety to the possibilities of action of the bat man.


There are also situations designed specifically for the Batmobile, such as the tank warfare sessions, in which you will find yourself facing armored drones. With the pressure of the left analog stick the Batmobile turns into a real tank, equipped with missiles and machine gun. The maneuverability of the vehicle changes, transforming itself into a sort of hovercraft capable of moving and discarding in any direction, even with the aid of afterburners, useful for avoiding enemy shots whose trajectory is marked by straight red or blue lines . By hitting enemies and avoiding their attacks, it will be possible to unlock heat-seeking missiles, which will automatically hit your opponents once they are released.
Already after a few hours, however, we began to lose interest in these sessions of combat between armored vehicles, too equal to themselves and whose presence appears too forced in some situations. More fun, however, are the sessions in which you have to shoot down special vehicles, such as an unmanned war helicopter.

Overall, the variety guaranteed by the Batmobile is enormous, however instead of letting you discover it little by little, Rocksteady immediately throws you into the fray with an obvious risk of "overdose". The choice, certainly suggestive, raises some perplexity as it risks leaving the player bewildered in the first hours of the game when rather the title should offer you a more gradual learning curve. The consequence is the impression that the title revolves around the presence of the vehicle, rather than the other way around. If you have the patience to wait, however, as the story progresses this aspect will be resized and the character of Batman, with his usual supply of gadgets, with his investigative vein and above all with the potential of the bat suit, will return to being central.

A pleasant novelty introduced with the upgrade of the suit will be the so-called KO terror, which will allow you, once you have rushed from above on the first unfortunate, to start a slow motion sequence (a sort of bullet time) with which to KO the opponents, up to a maximum of 3, with a series of feline shots. By earning skill points it will then be possible to bring the number of enemies landed at the same time to 4, in order to free an entire room manned by armed men in a few seconds.

If all this were not enough, Rocksteady has seen fit to introduce the Dual Play mode with which, by pressing a button, you can switch to the control of an allied character of Batman (Robin, Nightwing and Catwoman) and perform devastating combos.


The huge extension of the map, the countless amount of gadgets and alternatives in the solution of the clashes, in addition to the large number of side quests, some of these quite interesting, guarantee about 12 hours of gameplay for the main storyline to which they go to add at least another 20, wanting to complete the secondary quests and those of the Riddler.

From a technical point of view, the enormous effort required of your Playstation 4 to hold up the bulk of a city like Gotham in 1080p and with a frame rate locked at 30 fps it is testified, if ever it were needed, by the deafening noise of the fans, especially in these suffocating days of heat. Rocksteady's work with this Arkham Knight is immense and gives us one back city ​​full of details and alive as never before, although the crime density compared to Arkham City is more limited due to the size of the game map. The game makes extensive use of particle and glare effects and in general it feels that the game engine, theU, has been pushed to its extreme limits. Perhaps we would have appreciated a greater visual cleanliness where instead a slightly too pronounced aliasing is evident, but we realize that probably the console hardware, however powerful, is not yet ready (and the regret for a PC version that turned out so badly). is even greater).

Good sound, but we just can't get us to go down the dubbing in Spanish that, especially for some characters such as Commissioner Gordon or other supporting actors, in some situations of great pathos appeared to us undertone, apathetic or out of context. In short, a swing, albeit with a clear predominance of emotionally engaging moments. 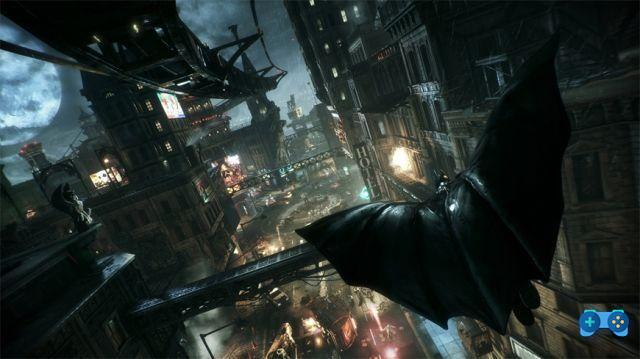 Do you want to complete all the achievements and trophies and know all the tricks, guides and secrets for your video games? SoulTricks.com is a group of video game fans who want to share the best tricks, secrets, guides and tips. We offer the best content to be a source of useful information, so here you can find guides, tricks, secrets and tips so you can enjoy your games to the fullest. Are you ready to get all the achievements of that game that you resist so much? Enter and enjoy your favorite video game to the fullest!
Dawnguard review, The Elder Scrolls V: Skyrim DLC ❯