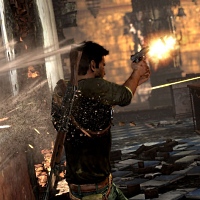 After leaving some clues, it's time to officially announce the PSN Multiplayer version of Uncharted 3.

The PSN version, very similar to the one released last months for Killozone 3, will be free and released with some packs, which will expand the gaming experience.

The PSN version of Uncharted Multiplayer will see level 15 as the cap limit, but will be expandable with several packs, which will be released simultaneously with today's update.

The available packs are detailed below:

For all those interested, the Goty edition will also be made available, including 12 maps, 40 skins and other content, at a price of 39,98 euros.

Do you want to complete all the achievements and trophies and know all the tricks, guides and secrets for your video games? SoulTricks.com is a group of video game fans who want to share the best tricks, secrets, guides and tips. We offer the best content to be a source of useful information, so here you can find guides, tricks, secrets and tips so you can enjoy your games to the fullest. Are you ready to get all the achievements of that game that you resist so much? Enter and enjoy your favorite video game to the fullest!
Pokémon TCG Review XY Primal Clash ❯

PlayStation Store: special discounts and offers of the week

Horizon: Zero Dawn, the dimensions of the map revealed