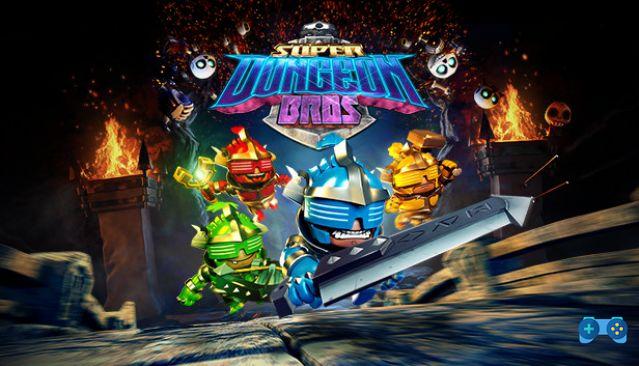 Four crazy characters for a revved up dungeon crawler.

The guys at Wired Productions and React Games thought it beautiful: what is a dungeon crawler based on after all? That's right, about exploring a single character through a potentially endless series of levels, dungeons and worlds, looking for treasures to conquer and enemies to defeat. The rules are those of linear progression, of enhancing your game avatar by unlocking new weapons and skills. And all this, in Super Dungeon Bros, is there and it works. But with a crazy little addition: crazy characters it's a predominant multiplayer sectore.

We spent several hours of gameplay on the game version dedicated to PlayStation 4, in the company of the crazy Axl, Freddie, Lars and Ozzie. By the way, do the names tell you anything? Any reference to the musical world? Think about it for a moment, and you will understand why music is also a strong dish of the Wired Productions production. In the meantime we will think about illustrating everything that convinced us about the title, and the aspects that instead made us turn up our noses.

The narrative premises of Super Dungeon Bros are, in fact, only premises. You can also safely skip the opening movie, since there is no real story, other than this: the kingdom is in danger and our four unlikely heroes will save it. However, you would already miss the first hints of good-natured madness that completely invests the heroes: each of them is moved by specific "worldly" interests, the desire to participate in fights, marry the most beautiful woman in the kingdom, rock happily and so on. For some strange reason, they believe that to bring them to their own personal satisfactions it will be enough to lead their hands against endless hordes of enemies in very dangerous dungeons. And that's okay with us.

The title consists of 3 different worlds, each of which is divided into a certain number of levels or dungeons. The progression is absolutely linear, with no crossroads whatsoever: it starts from the beginning of the dungeon and arrives at the end according to precise paths, which become complicated only (and rarely) when it is necessary to reach some particularly useful object such as treasures and potions that restore energy. At the beginning of each level the player can decide which of the four protagonists to impersonate, and which weapon to wield. We dabbled with the crossbow, believing we were safe with ranged attacks. At least, Diablo 3 had taught us this. Never choice was she more senseless: a giant sword knows how to keep three hundred enemies at bay, but the crossbow can only focus on one of them at a time ... and the skeletons have devoured us.

Although the mechanics are quite elementary, the challenge offered by the title is particularly interesting: if you let your guard down, you end up on the mat in five seconds. To survive you have to carefully calculate your moves and evaluate the path and enemies on the screen. By collecting coins it will be possible to upgrade our Bros at the end of each level, buying upgrades for health, weapons and armor worn. By becoming more resistant and lethal, of course, it will also be easier to keep the bosses at the end of the level at bay, the only ones that really require a minimum strategy to be overwhelmed (for example the throwing of environmental objects present in the scenario). 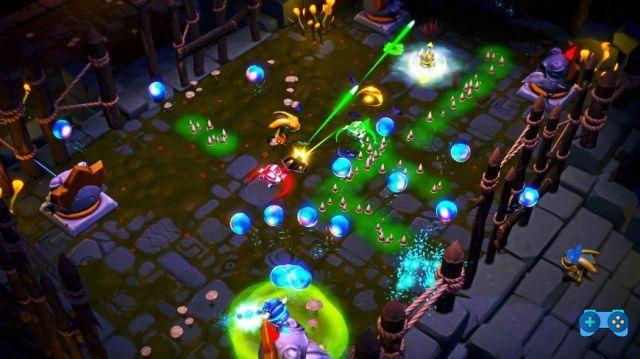 Go get the neighbor, help here

A simple concept must be definitively understood: Super Dungeon Bros is designed for multiplayer. Almost exclusively for multiplayer. Solo play comes later. To prove it is the level of difficulty: very high if we face monsters and dungeons alone, tending to low in the company of friends. This does not mean that it is not fun even alone, but only that it is much more fun in company. It is possible to play alongside up to three friends who have a controller or select the online mode, with the random recruitment of three other fearless Bros. Or you can invite other friends online from your account list. The number of enemies on the screen does not seem to be particularly affected by the greater or lesser number of players present in a given level, the same goes for the health of the bosses.

Technically speaking the production of Wired Productions does not make you cry for a miracle, but honestly said it is not written anywhere that I have to try: it is clear that it is a light title that focuses on immediate fun and action rather than on other elements . Moreover, the artistic sector is not even superficial as one might expect at the first sight of the trailers: the characters are discreetly characterized, their style is unique and peculiar, the game environments and the visual choices seemed suitable to us. On the other hand, the sound sector is disappointing, a real shame if we think how much the title winks in a winking way to the world of music. The soundtrack was supposed to be a backbone of the production, but instead relegates itself to the background and is soon forgotten.


The choice of paid DLCs and small contents to be purchased separately also made us turn up our noses. Although the title is very cheap, in fact, some stones for the enhancement of the main weapons can be purchased from the store using a certain amount of "real" cash, and there are even the female counterparts of our heroes, always for a fee. Those that could be included as additional free contents, perhaps to be distributed for free after the release date, were therefore offered for sale: a choice that we already criticize in the larger productions, but that in this small charismatic title seemed completely out of place. Fortunately, there is plenty of fun, even without the need to buy anything else.