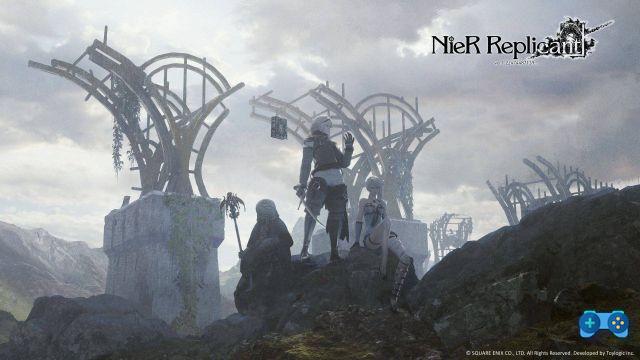 Nier Replicant ver.1.22474487139… is the new title of Toylogic e Square Enix. In addition to being the prequel to NIER: Automata, Repeat is the updated version of the Nier original of 2010. The game, released for PlayStation 3 e Xbox 360, however, it never made it to the West. We had a chance to try the title on PlayStation 4, here's what we think!

The genesis of the hero

Nier Replicant it has notable differences with its predecessor. Most of them, however, are linked to the technical sector and will be analyzed later.

From the narrative point of view, however, Nier Replicant follows the events of the second version of the original title. There are in fact two variants of the Nier released over a decade ago: Nier: Gestalt e Nier: Replicant. The plot differences between the two are practically non-existent. What changes is the degree of kinship that binds us to Yonah. In shape, we take on the role of the girl's father, while in Repeat we play in the role of the brother. Another difference relates to the year in which the events take place. Nier: Gestalt is set in 3361, Repeatinstead, in 3465.

Nier Replicant ver.1.22474487139… it therefore follows the events of the original Repeat. The new version also includes an extra main mission that extends the longevity of the title by a couple of hours.

The updated version also offers all the extra content of the original title. To these, there are also a whole series of new rewards ranging from alternative costumes to the possibility of using elements of NIER: Automata.

Square Enix e Toylogic have also added a brand new ending to the game that adds to the multiple alternative endings already present in Nier original. 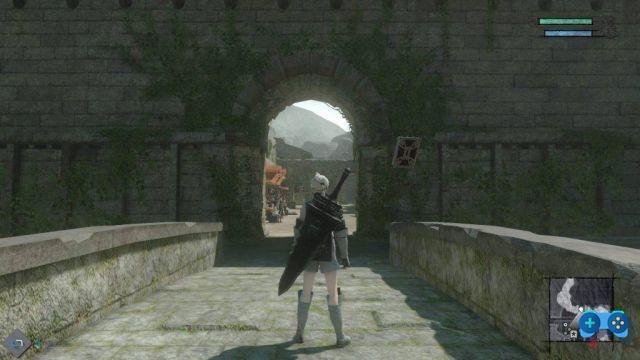 The salvation of Yonah

Our journey takes place in a post apocalyptic world, ruled by magic. It is a world where the sun is never visible in the sky, not even during the day. This is because the Earth's axis has tilted, cutting the sun out of its field of view. The year is 3465. The world is populated by Ombre, fearsome enemies that haunt the various environments and threaten the survivors of mankind. The few machines that remain on this planet are now debris and lie underground or in forgotten mounds. Nature has taken over much of the globe.

As the brother of Yonah, we are called to face a delicate mission: to save the life of our little sister, Yonah. The little girl is suffering from Necrography, a terrible disease for which there is no cure. Let's meet soon Grimoire Weiss, a talking book with immeasurable powers, which reveals the existence of the Sealed Verses. By collecting them all, we may have a chance to heal Yonah. The verses are scattered throughout the game world and are obtained through thrilling bossfights or other main storyline missions.

One of the strengths of the production lies precisely in its narrative sector. The dialogues are written with raw maturity and make the storyline much more adult than it would seem at first glance. The merit of this success is also due to the writing of the characters, all moved by different motivations and with varied characters. For example, Kainé, warrior possessed by Ombre. It is a grumpy, harsh character with vulgar tones, which contrast with the femininity that surrounds her. 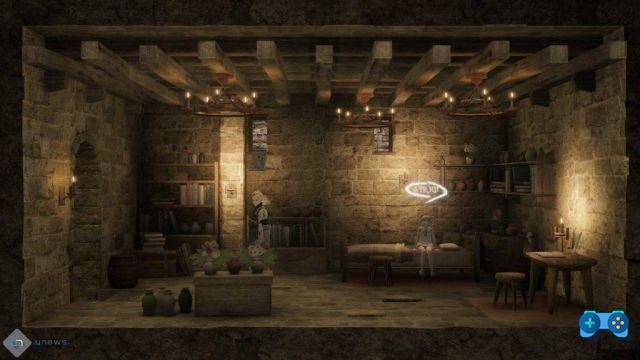 Much of the "rejuvenation" work carried out by Yoko Taro, creative director of the series, and by his team, concerns the gameplay.

The combat system of Nier Replicant it is dynamic and pleasant and manages to perfectly combine the use of magic with melee weapons. There are many spells that are obtained through i Sealed Verses. These have a huge variety of effects and it is certainly useful to try them all to find the best technique for dealing with the pitfalls of the game world.

There is also an enemy lock system that manages to make us orient even in very narrow rooms, compensating for the movement of the camera which is very close to the action. By engaging an enemy, we can in fact focus our attacks on him and face him in the best possible way. Once the enemy is defeated, the lock automatically passes to the closest opponent. Additionally, you can manually move the cursor by moving the right analog stick, so you can decide which enemy to lock onto and face first.

The melee has also been improved. We can alternate different types of attacks with the triangle and square buttons of our pad and execute executions with the circle button when the enemy is on the ground. In addition, the attacks can be combined with parrying or dodging, in order to make the combat more and more dynamic.

Le bossfights are all exciting and present an excellent level of challenge. Testing the game on normal difficulty, we found ourselves having to repeat some of the more challenging encounters multiple times. The moveset of the bosses are various and it is not always possible to guess their behavior at the first attempt. However, facing a boss never becomes frustrating and the challenge remains balanced.

During the fighting, we can also receive words from the defeated enemies. These can then be used to enhance our skills in battle. To do this, simply go to the dedicated menu and select what to improve among the spells, weapons and dodges. 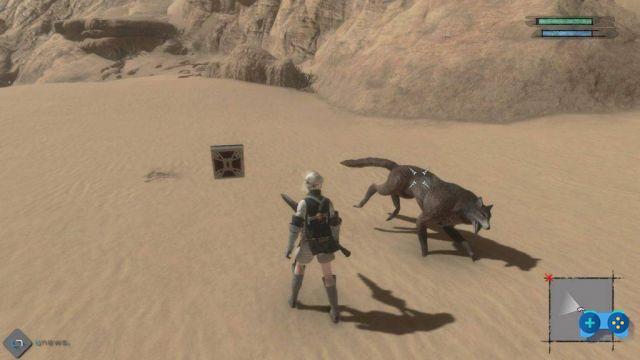 For those who prefer to enjoy the journey of Nier Replicant like it was a cruise in a magical world made of Ombre and pitfalls, Square Enix e Toylogic they also implemented an automatic combat system. Although it is only usable by playing on the simplest difficulty, the automation of the combat allows players to focus entirely on the story and to better understand some of the dialogue that is lost in the frenzy of the battles.

Through automatic combat, the player can enjoy exploration more, one of the strengths of the game. The environments are in fact vast and all extremely different from each other. In a short time you can go from an enchanted forest to an arid and hostile desert, from a village of peasants to one of fishermen. Everything proceeds with lightning-fast loads that do not break the flow of the game.

The magic of the world

Toylogic e Square Enix they worked hard to make sure this wasn't a remastered or remake, but an improved version. It's the same Yoko Taro to support the importance of this definition.

For this reason, in addition to having a resolution of 4k e 60fps even on consoles, Nier Replicant he sees an important work also in terms of visual rendering in general. In fact, the render distance is increased to be similar to that of NIER: Automata, with a greater number of objects on the screen and a greater portion of the visible field.

<strong>The Eurobursar</strong> Yoko Taro he also recreated the character models and their animations, which are now extremely fluid and enjoyable. The same work has been done on enemies who react more realistically to hits received. All this avoids that the hits made seem not very credible or are made through animations that go "jerky".

The overall stability of the game also presents no problems. Uploads are always fast and almost immediate and we haven't found any bugs to report. 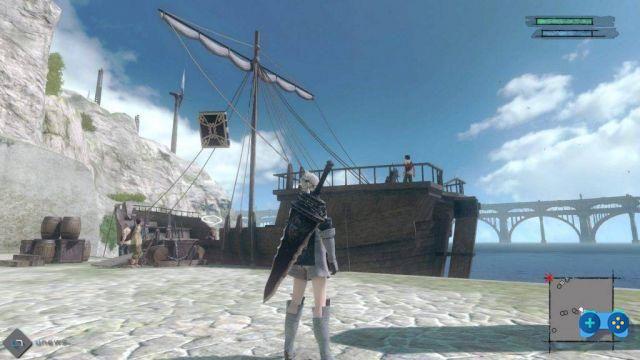 Song of the Ancients

One of the most striking elements of the technical sector is the colonna sonora. This has been rewritten and expanded on the occasion of the new version of Nier Replicant and presents an enormous variety of totally different compositions. The songs that make up the soundtrack blend perfectly with the environments that our protagonist is going through and manage to return the emotions that these must arouse in the player. We move from the harmonious and cheerful tones of the music that resounds in the village of Yonah, to pressing and epic compositions that create a growing tension before the bossfights (that of the Nest is a perfect example).

One of the most beautiful songs is certainly Song of the Ancients, written by Emi Evans, in a language she invented that includes words from different languages ​​such as Spanish, Gaelic, French and English.

The work that Square Enix e Toylogic they played for Nier Replicant it is absolutely commendable. The title recreates memorable settings, accompanied by a superb soundtrack and a masterfully written story. Enemy battles are always addicting and bossfights feature a balanced challenge level that never makes them boring. We haven't encountered any bugs or slowdowns and the gameplay feels smooth and enjoyable.

Finding flaws in this game is a very tough task. To do this, you have to dedicate yourself to the smallest details. Specifically, the range that allows us to drop the objects is very minimal, consequently, if you end up exactly above the object, in some cases it becomes difficult to activate the hitbox that allows you to press the button to collect the objects. This is probably the only problem we encountered during our tests. In short, whether you are a fan of the saga or not, we can not recommend the purchase of Nier Replicant.

Do you want to complete all the achievements and trophies and know all the tricks, guides and secrets for your video games? SoulTricks.com is a group of video game fans who want to share the best tricks, secrets, guides and tips. We offer the best content to be a source of useful information, so here you can find guides, tricks, secrets and tips so you can enjoy your games to the fullest. Are you ready to get all the achievements of that game that you resist so much? Enter and enjoy your favorite video game to the fullest!
Cyberpunk 2077: all the details of the patch 1.02 available ❯