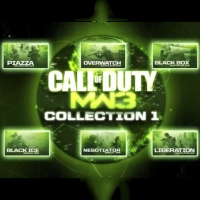 Six maps in one package to return to the war again!

There are things that are unlikely to change. Call of Duty as the most popular FPS in the gaming landscape is one of them. An attempt to assert its predominant position over the other FPS is provided by the Collection Map Pack # 1 di Modern Warfare 3.

This DLC contains six maps, including 2 dedicated to Spec Ops mode, already made available to subscribers to the Call of Duty: ELITE Premium service, and from March 20, 2012 for all Xbox Live players.

Read on to find out if the package is really worth buying.

A novelty, if you can call it that, is the idiom in Spanish. Oh yeah. The maps released for ELITE had English commentary, while now they are audible in Spanish.

The maps differ in settings, trying to combine the diversified scenic impact with the related game approach. The gameplay, always frenetic and adrenaline, moves its peaks in terms of enthusiasm, passing through various situations, which are unlikely to be boring.

The recipe proposed by the duo-team Inifity Ward and Sledgehammer Games is clear and obvious: provide new playing fields in which to see the players deal with new situations in which even the rookie on duty can make the nice big butt to more hardened ones.

Located in a luxury Californian residential neighborhood, Black Box offers a colorful and sunny map marked by the green lawn of a villa in which lies the carcass of the legendary Air Force One, the plane of the President of the United States of America.

Players can use the plane as a good shelter between the two factions as one comes from one side of the map and the other resides in the semi-destroyed and now dilapidated mansion.

The little level change on planes forces players to frantic shootings with sudden bypasses, while the most daring will try to break through the plane's carcass. other similar constructions and gutted on the sides allow snipers to position themselves and make a massacre from above. But the absence of shelter points will make them easy targets.

You know a skyscraper under construction like the ones you see in one of the first missions of the game? Well. Overwatch provides players with an all-vertical map in which there is no shortage of distant areas that the most skilled snipers will immediately familiarize with to aim and strike undisturbed. The other soldiers can use both the innumerable ladders to make stalking and to surprise the opponent, also taking advantage of the semi-empty rooms and under construction to leave claymore and throw grenades from the empty stairwells. Aids from above are always welcome to get rid of snipers barricaded in places in the distance. Do not miss the crane which, as in Modern Warfare 2, is useful for surprising enemies by hitting them from a point that is difficult to reach from below.

They invaded Central Park. There are tanks and missile launchers. Liberation confronts two factions, one that presides over the war settlement placed inside the park, the other to offend by penetrating from various points on the sides. This map is very distinctive, both because it instantly reminds you of the real pulsating park in the green heart of New York. The passage of the wind that raises the dry orange leaves in an autumn ready to give way to winter, are a real stroke of class in the look of the map. There are no real surrounding elements useful for shelters, apart from fountains, trees and military vehicles, in less frequent numbers. In contrast to an easy exposure there is a series of underground pipes that the soldiers will use to get around the enemy or even to escape when surprised and ready to die.

It is a joy to have a map taken from a town on the Amalfi coast. Piazza puts players in contention for the various war playlists between pretty bistros with outdoor tables and chairs, cars parked on the side of the road and arcades to be used as a shelter against attacks from above by aircraft such as planes and helicopters. Its peculiarity is a series of streets of different widths that unwind between climbs and descents while joining various meeting points, the so-called squares. Needless to say, it is one of the best both for varied level design, which allows close clashes with others at medium and long range, and for its extension, finally not short, which combines various very closed and cramped structures. The movement between the streets is therefore full of tension as you can hide infamous enemies stationed or sneak up behind in the run. In practice, run or stand, the choice is yours. The practicality of sheltering is good thanks to many elements scattered around the map, but there are no points for sniping even if it is possible to do target shooting from medium distance. While not innovating compared to other base maps, it manages to involve for the different design and pleasant look.

For this particular mode in which to play in the company of your friends against a vast wave of opponents managed by artificial intelligence, two new missions are made available: Black Ice e Negotiator.

In this challenge you will be put in a position to launch an attack on a base in the snowy mountains. After a series of rides aboard a snowmobile and harnessing the practical Uzi, we proceed to the actual assault of this stronghold on the ice designated as one of the localities used by Makarov.

Using a powerful M16A, you have to make your way through the various guards you meet along the way, between tunnels, open areas and other routes. The conflict becomes more and more difficult and the tension rises forcing the player to change weapons often not being able to count on scarce ammunition in possession. It is therefore good to kill the enemy and steal the weapon. Obviously, every player is inclined towards the one they like best. The mission takes about an abundant hour and is very hectic and full of special effects, especially for the final part complete with a clockwork detonation.

As in one of the missions in the Campaign, Shopkeeper sees the player and his friends face a series of waves of enemies in the final attempt to save the lives of other fellow soldiers who were captured like us. The Indian setting is really full of new ideas, both because it is lived in an alternative way (from the end to the beginning with respect to the single player's mission), and because it is really well narrated.

The host is therefore a series of exciting moments seasoned with "slow motion" scenes that have made the Call of Duty series known all over the world. Beautiful course changes with twists. This mission takes about a good hour and a half and is certainly the best news of the package.