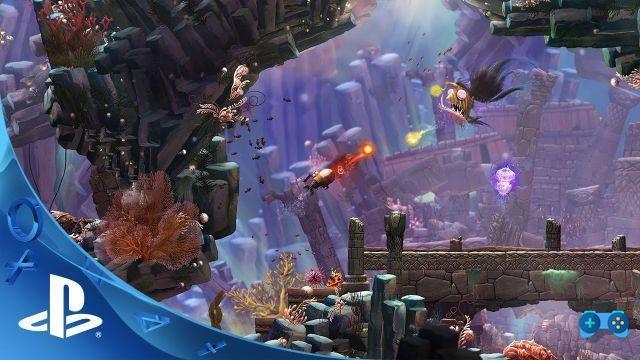 The last effort of the Insomniac Games it is a very different game from all previous titles it has developed. In fact, during its decades-long history, Insomniac has always loved experimentation, experimenting with genres and IPs that are often very different from each other, from early platformers such as Spyro and Ratchet & Clank, to FPS and TPS such as Resistance, Fuse and Sunset Overdrive. going through even virtual reality games like Edge of Nowhere, The Unspoken, and Feral Rites. Joining this long list of titles is their next project, a PS4 exclusive Spider-Man game about which not much is known yet, which represents their first entry into the territory of open-world superhero games.

The game I'm going to review today, however, is not part of any of these gaming genres. Song of the Deep is an underwater metroidvania, if it can be defined as such, that is a 2D side-scroller set in the depths of the sea, with gameplay reminiscent of that of Metroid and Castlevania. This game is a first for Insomniac in this genre, but it is also a first for another reason: it is the first game to be published by GameTrust, the publishing division of GameStop.
The question now is: will Insomniac have managed to develop an excellent title even though this is the first game of its kind developed by it? If you want to find out, read on.


My father used to sing me his adventures

It is difficult not to spoil and clarify the plot of this game, considering that as you go on you discover more and more details about the sea depths and the creatures that populate them. Anyway, very briefly: Merryn is a 12 year old girl, daughter of a fisherman, whom she loves very much. The father goes fishing every day to feed his family, and returns late at night. His daughter awaits him on a cliff with a candle in hand to guide him home safely, after which they have dinner together, even if the conditions of their house are not good at all and they do not always have something to eat for dinner. Despite this, Merryn is a happy child.

After dinner, her father sings her stories of his own adventures, listening to which Merryn falls asleep and dreams of the mysteries of the deep sea, while considering these stories pure fiction. One night, Merryn's father does not return, and the daughter waits for him until the next night, when she falls asleep. In this troubled sleep, Merryn has a vision of her father, trapped at the bottom of the sea, who begs her to save him. After this vision, the little girl decides to build a small submarine from the wreckage that her father had accidentally fished during his trips to the sea, and go and explore the abyss to save her father. During his journey he will encounter various creatures and face numerous dangers, discovering what happened to his father and the rest of the creatures of the sea.


The story is definitely one of the strengths of the game: the narration of Siobhàn Hewlett (the game is only in English with subtitles and menus in Spanish) manages to immerse the player in the story and makes him feel like Merryn, to whom his father tells stories. The narrator often intervenes with observations and explanations about the game mechanics that never interrupt the dive but increase it, such as the explanation of the checkpoints, rendered as sources of a mystical energy of the sea called “tyne”. In short, the story itself makes it very easy to identify with Merryn and her adventure, and also manages to make the player grow fond of Merryn very easily.

Il gameplay is extremely simple and understandable for any player of any age: the mouse controls the direction of movement, while the “W” button controls the acceleration of the submarine. The "A" and "D" buttons control other functions that the player unlocks throughout the story through various upgrades. The left mouse button controls the submarine's magnetic claw, the means of interaction with the privileged external environment, through which almost all actions and part of the combat are carried out. The submarine, as written above, can be upgraded in various ways: the amount of health and tyne energy are enhanced through objects that can be found throughout the vast map, in the form of hull pieces and energy containers, while the weapons, the claw and various other features of the submarine are upgraded by purchasing upgrades from hermit crab shops scattered around the map. The currency of the world of Song of the Deep includes fish-shaped trophies, pearls, treasure chests, coins of various precious materials and so on, all obtainable by defeating enemies or by venturing into the many secret and secondary areas of the map.

The fact that the gameplay is simple and understandable, however, does not make it any less difficult in various situations. In combat, basic health and energy, if you don't care to reap the upgrades for them, make the fights a grueling continuous escape with a few attempts to hit enemies in the few moments of pause. Personally, picking up only a few of these powerups (not many, having completed the game with nearly 2 health and 2 energy bars out of 4 and 4), I struggled in various fights. These difficulties multiplied towards the end of the game, which made the fights and even some puzzle sections extremely frustrating in various cases. This, however, is a problem that can be easily remedied by collecting more power-ups and not completing the story first, so I don't exactly consider it a design error as much as a questionable choice but which still does not affect gameplay.

Unfortunately, the same cannot be said for the "Slipperiness" of the controls. More often than not, the difficulty of the puzzle and escape sections has been added to difficulty in controlling the submarine, which is unmanageable at high speeds, and annoyingly elusive at normal speed. More than once I have been hit by an enemy attack or a laser beam due to a maneuver misinterpreted by the control system, not to mention the difficulty of completing some sections due to the transport of a heavy object , which makes the submarine a disaster to control - the counterweight makes the submarine susceptible to gravity and cargo movement in general once the submarine has stopped.

All this could have been avoided by inserting a brake button, which would have given an opposite propulsion to the movement of the submarine, making it stop without problems. I suppose Insomniac wanted to avoid this solution as it wouldn't have been very realistic to put a brake on a submarine, but the choice made it damaged the overall gameplay.
In summary, the gameplay will be
bbe normal and easy, but the "slippery" controls unnecessarily increase the difficulty.

The beauties of the abyss

THESong of the Deep's open world is vast and full of rewards for those who decide to explore it all. The game world is divided into 11 areas, some of which can be reached by means of vortexes that transport the player from one area to another among those already discovered (the classic fast travel present in many open world games). The only problem with these vortices is that there are only 6 of them, and they are not always placed close to the goal to be reached, which can make traversing various areas of the game world a bit boring, especially when you are finds himself facing various enemies in areas already "cleaned up", so to speak.

There are numerous incentives to explore the game, as mentioned above. For example, various upgrades, improvements and expansions for the submarine's capabilities can only be found by exploring the game world and challenging yourself in various secret areas full of obstacles and enemies to overcome and which therefore offer a greater degree of challenge for those who wish. The game often pushes the player to retrace previously overcome areas after obtaining new gadgets and / or weapons, and this increases their longevity not a little, even if in the long run it could be an exasperating grind for players who want to complete. the game 100%.

The game world, from an artistic and creative point of view, is extremely well cared for and varied, and has very different enemies and bosses, even if in particular for two types of enemies it is possible to notice as higher levels of the same enemy they are simply colored differently and have marginally different attacks. The 2D graphics make this world almost an illustration in a storybook, and after all the storytelling of the game itself is carried out by means of illustrations in a book, without any kind of traditional in-game interludes.

The whole art direction of the game therefore makes it an extremely suitable game for a younger audience, also considering that the stated intent of the CCO of Insomniac Brian Hastings, project director, was to create a game whose protagonist was a girl that he had qualities that his own daughter Fiona wanted to imitate (I would also add that Hastings' daughter is the one who gave the idea to her father for the creation of the game). From this point of view it can be said with certainty that Hastings has succeeded in his intent, considering that the most evident characteristics of Merryn are courage and intelligence, which she uses to face the obstacles that face her during her journey.

The sound of the sea

A final observation can be made regarding the sound part of the game: both the noises of sea creatures, weapons and Merryn's submarine, and the soundtrack of the game are extremely well done and cared for. In particular, Jonathan Wandag's soundtrack manages to transport players into the depths of the sea with sounds that almost recall “The Little Mermaid”, adapting according to the area in which the player is.

For example, if you are in the "Prairie of the shining algae", the first area of ​​the game and also the one closest to the sea, the music is mysterious and ecstatic at the same time, giving a perfect impression of the experience of a child who for the first time it is under water and near coral reefs; if you are instead in the "Crypts", one of the most abyssal and dark areas of the map, inhabited by frightening creatures, the soundtrack will switch to a darker and more pressing tone. In short, the extreme care placed by Insomniac in his works can also be seen in the music, which perfectly captures the atmosphere of the game.

add a comment of Song of the Deep review