The ghost of the desert is unforgiving.

For several years, gamers have been waiting for titles that centered mostly onimpersonate a sniper, with all that this entails: waiting patiently in your position, taking aim and… BUM! One shot, one kill. Finally, some software houses have taken into consideration user requests and have developed various games, but that in the most some cases turned out to be meager "aim-and-shoot" without a solid storyline. Among the few development teams that have succeeded, it stands out brilliantly Rebellion: founded in 1992, in 2005 attempts the enterprise with Sniper Elite, which has captured the attention of lovers of the genre for various aspects faithful to reality. The title met with some success, which suggested that not even the Rebellion boys had been able to accomplish what the public demanded. Later, well 7 years later, the team tries again with Sniper Elite V2, and from there the series is straight away splashed at the top to the best sniping titles mainly for the introduction of the real ballistics in every detail: wind, distance… After the very good success of the second chapter, here it is Sniper elite iii with lots of news and a more solid plot than any of its predecessors, which diverts from the usual settings of Berlin and surroundings: Africa, gentlemen. The desert has never been so dangerous.

Under the scorching sun of the African desert

As written in the introduction, do not expect the usual story set in Germany during the Second World War where you have to overthrow the Nazi government, kill Hitler or something similar. Indeed, the only aspect that remains the same is the period of the Second World War, but everything else is completely new, which gives a breath of fresh air compared to the usual settings.   Karl is a very skilled American sniper who joins the mission in North Africa just in the period in which the United States enters the war: his goal is to kill Vahlen and prevent the success of his project. Vahlen, a Nazi hierarch, was sent to African territory to secretly carry out the Ratte, un huge tank that it would have disastrous global repercussions if it were completed and that it would claim millions of innocent victims. Finding out the location of the hangar in which it is built, however, is more difficult than expected, since the German troops are located everywhere and finding clues or, better, Vahlen is not at all easy. At this point, theAMLA (Long Range Desert Group), a formation of the British Army ready to support Karl to prevent the Ratte from being completed and deployed in the war. It is a race against time: if the sniper fails his target, the world will soon find itself subjected to German power. The beauty of the plot is precisely the fact of being set during the Campaign of Africa, addressed very few times in the history of video games as well as an excellent choice by Rebellion. This therefore takes players away from the repetitive German locations with Berlin to make room for new settings and stories to tell. The campaign hovers around 7 hours of play in total, which can significantly increase by satisfying each secondary objective and researching all collectable, including war diaries and collectible cards. In addition, they support all this a cooperative, which allows you to face the story together with a friend, the challenges and multiplayer, which seems good in terms of game modes but which, at least so far, we have not been able to try due to technical problems encountered only with the PlayStation 4 version of the game. Currently, therefore, we will not analyze the multiplayer in review (NB: in the longevity vote it is however counted as playable). Bad start for Rebellion under this side therefore, which will affect the final evaluation albeit not heavily. Small note: finally we will not only have more to do with German soldiers, but also with Italian, therefore yes: we will also kill our compatriots. By this we do not mean that we are against Italy, on the contrary, we felt obliged to take this precaution for a reason, which is that the development team has taken care of down to the smallest detail the African Campaign.

One shot, one kill

As for the gameplay, Sniper Elite III shows its teeth highlighting what makes it, at least in our opinion, the best title tactical sniping available so far. Going in order, let's start talking about thearmamento, which has undergone several improvements that are very dear to those who love too personalize, at least minimally, his own sniper rifle. We will have the possibility, in fact, to modify barrel, action, case, viewfinder and reticle, obviously after unlocking the various options of choice. To avoid always changing our weapons based on the type of mission, moreover, we will have available four classes different to equip at will. Our arsenal will see the following weapons, unlockable as you progress through the main campaign and level up:    PRECISION RIFLES - M1 Garand - Carcano - Gewehr 43 - Lee-Enfield Mk. III   SECONDARY WEAPONS - Sten Mk. II - MP 40 - Thompson - Panzerschreck   GUNS - Welrod - Luger P08 - Webley Mk. IV As regards theequipment, we will be able to choose between bandages, medical kits, M24 grenades, dynamite, land mines, tripping mines, S-Mines and armor-piercing bullets, also here based on the mission we will have to face. By default in our inventory, however, we will find the binoculars, very important to be able to report enemies and get an idea of ​​their positions (from NO underestimate), and theflintlock, useful for attracting attention or for detonating dynamite. Being a stealth title, "Be a ghost" that's all: especially at the higher difficulty, completely forget about your messy side, arm yourself with patience and act in perfect silence, with close kills or shots only in the presence of noises such as to cover yours, or in no time you will find yourself under three meters of earth, if you understand what we mean. Use the tactics, therefore, it is the key to enjoying the game to the fullest and exploiting its full potential by really identifying with a sniper. The highlight of the title, as well as in its predecessor, is certainly the real ballistics: for those who still do not know, before shooting at a target 200 meters away, to say, we must calculate the trajectory of the bullet and our position, adjusting the aim according to the point we want to hit. Also, if ours heartbeats are high, taking aim will be more complicated and we will need to wait a few moments to recover some breath instead of risking missing the shot. To facilitate long distance shots, however, it is always possible emptying the lungs to have a more precise aim even at our farthest targets, as long as our heart rate is below the 80 beats per minute. The beloved ones are back in Sniper Elite III too kill-cam, all of which have been improved and offer other internal organs to shoot and watch their implosion, even if you know: the brain always goes for the best. Even the bones, especially the facial ones, are destroyed when the bullet hits them. The real novelty, in any case, lies in the "kill-cam ”of the vehicles, which would be more legitimate to call destroy-cam or something like that: now shooting in the direction tank or engine of a vehicle we will be able to witness the spectacular vision of the bullet pierce one of these and literally do to blow up tanks, trucks and so on. A feature that adds a little touch of class to the title, as we see it. To end our gameplay analysis, let's spend a few words on the enemy AI and the available difficulties. L'artificial intelligence of enemies has been visually improved, as soldiers no longer just listen to where the shots are coming from, but use binoculars to understand where we are exactly in order to be able to fool and attack from every possible point. As for the difficulties, there are four available: Cadet, Marksman, Elite and Authentic. Well, while the first is the only free from ballistics and the enemies are really careless, the following complicate things, while the last one is a really tough challenge. Do you want to know why? Enemies that behave as in reality and react to every slightest noise or suspicious movement, real ballistics and ... no saving. Exact. Hardcore gamers, step forward: Sniper Elite III has some for you too!

Do not get paranoid immediately for what is written above, let's go in order. The graphic sector it's more than good, especially in regards to the textures and details of Karl and the weapons. L'surrounding environment it is full of dilapidated houses, camps, mounds and so on that also allow you to find dozens of workstations in order to have the widest possible view of enemy territory ... or to hide in case of unwanted encounters.

Unfortunately, we cannot say that the graphics are great due to the presence of some bug (although they are rare) and one bad choice from Rebellion: when they explode, i vehicles disappear magically into thin air, they pulverize. Let's face it, it's a bad thing to see in today's titles, even worse if they're on next-gen consoles! The audio compartment, on the other hand, it is of excellent workmanship in terms of weapons and background music, although some are out of place. The dubbing in Spanish it is good, although it leaves something to be desired on some occasions: well done the pre-mission briefingbut some speeches that require emphasis or particular tones of voice are simply read and that's it. In general, however, nothing particularly frustrating and bad. 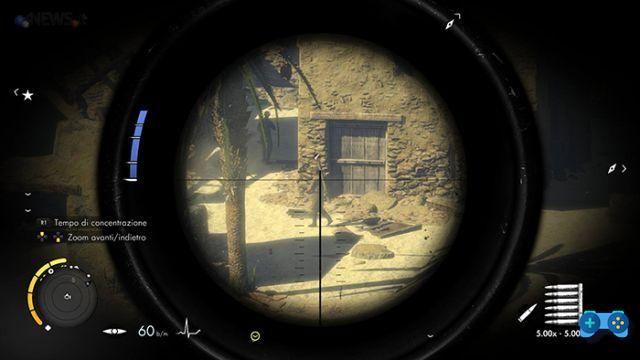 Sniper elite iii it has kept expectations and has been able to keep it winning formula of its predecessor with several improvements. The improvements made to the already popular kill-cams certainly benefit the gameplay as well as the ability to modify your shotgun. Even if the armament consists of a dozen weapons, moreover, they are more than enough, since we will use the sniper rifle in most cases and the rest of the equipment performs its duty. The stealth factor is at its peak in this chapter and is the only way to complete the objectives without running into gunfights, especially if you are playing on Elite difficulty or, worse, Authentic, which is very welcome given which satisfies even the most "masochistic" players. The choice of the African Campaign gives a breath of fresh air compared to the usual settings. In general, therefore, Rebellion has been able to develop a third noteworthy chapter, quite long-lived and with a solid plot that we highly recommend to all fans of the genre and to those who, instead, approach it for the first time.