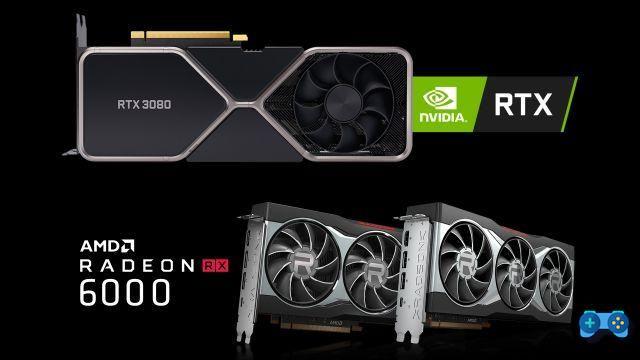 Now that too AMD has pulled its new series of graphics cards out of the hat RX 6000, we can make a comparison of specifications with the series RTX 3000 di NVIDIA.

The table below shows the various GPUs of the two manufacturers, sorted by the characteristics of the proprietary versions:

On balance, the choice between an RTX 3000 or a Radeon RX 6000 is not that simple. Once you have defined your budget, be it for the graphics card alone or for a new configuration, it is important to analyze the performance / price ratio of the various GPUs as well as the technologies offered by AMD and NVIDIA.


Below we will rattle off some of the features listed in the table above to understand which is the best decision.

The RTX 3070 is the direct competitor of the RX 6800 and both are the "little ones" of the family. From a specification point of view, the RX 6800 offers twice as much VRAM as NVIDIA's GPU, 16 GB vs 8 GB. Although we do not have information about the base clock yet, we can see how the RX 6800's boost clock shows a difference of around 400 MHz. This means that it is able to work at higher frequencies than the RTX 3070. To its "disadvantage" , the RX 6800 sees 30 W more consumption and a higher price, which at the exchange rate could be around € 600.

In the first chart published by AMD, the RX 6800 would offer better performance than the RTX 2080 Ti. The graphs visible in the gallery at the end of the article confirm everything in detail, sometimes denoting a greater performance increase. A benchmark has not yet been performed with the RTX 3070, so we will have to wait for other sources to understand the actual potential of the card. 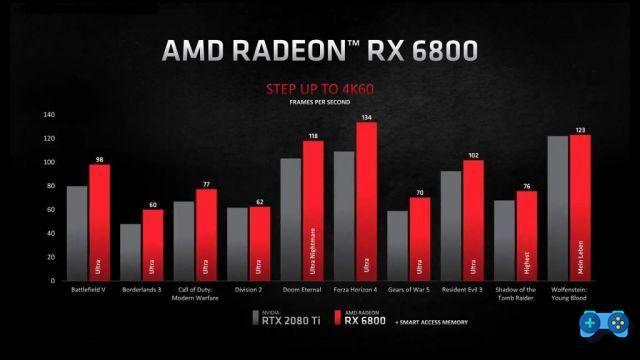 In the cheaper range, in our opinion the best choice is the RTX 3070. Net of 8 GB of VRAM less than the RX 6800, the significantly lower price justifies the purchase. Furthermore, the gap with the RTX 2080 Ti shown above is not particularly pronounced, suggesting that the RTX 3070 can easily equalize or surpass the RX 6800.

Both true protagonists of the scene, the RX 6800 XT boasts 16 GB of VRAM but a reduced memory interface, 256-bit against the 320-bit of the RTX 3080. Again, we have no news related to the base clock, but we note a positive difference of 500 MHz in the boost clock. Furthermore, the card's TDP is 300 W, slightly less than its rival NVIDIA.

The real selling point of the RX 6800 XT is undoubtedly the price. According to the benchmarks, the GPU performance would be very similar to the RTX 3080 but at a slightly lower price. AMD, in fact, has announced a cost of $ 649, which at the exchange rate will probably remain under the 719 € of the RTX 3080.

Note: The benchmarks were performed at 2K resolution with graphics settings set to maximum. In the gallery at the end of the article you will also find the tests carried out in different games. 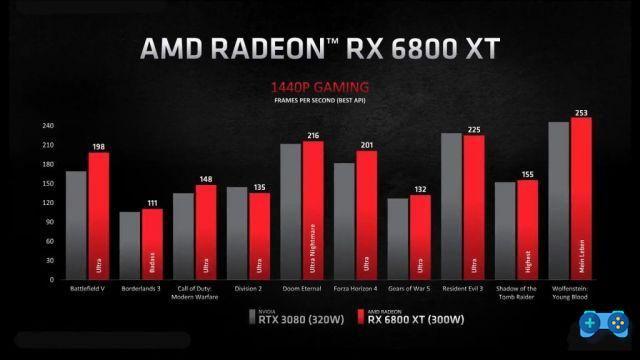 In this intermediate range, as well as the most captivating, the decision must be made more on the technologies offered by the two cards than on the price, the latter slightly in favor of AMD.

The RTX 3080 has the DLSS 2.0, an AI rendering technology capable of increasing the frame rate in games and sharpening the image. The ray tracingin addition, it simulates unrivaled realistic physical light behavior. There G-Sync technologyfinally, it allows you to disable V-Sync by letting the monitor processor itself manage the frequency, continuously adapting it to the fps in order to eliminate the annoying tearing.

La RX 6800 XT, on the other hand, it can count on proprietary technologies such as the Radeon Image Sharpening: along the lines of DLSS, it is able to make the image more detailed without impacting the performance of the graphics card. AMD FidelityFX improves the rendering of graphic effects and the management of lights, shadows and reflections in general, albeit in a different way from ray tracing. There FreeSync technologyFinally, it works the same way as its NVIDIA counterpart with a variable refresh rate.

With a view to a configuration from scratch, we feel like recommend the RX 6800 XT in conjunction with a FreeSync monitor, which allows you to save on the general build without giving up good technologies. Of course, if you already have a G-Sync monitor or a bigger budget, you can find your way around the RTX 3080 without any problems.

Obviously, there is no lack of comparison between the two giants of their respective families. Despite visibly lower specs such as the memory interface and available VRAM, the RX 6900 XT seems to be able to hold its own against the mammoth RTX 3090. As shown in the graph below, performance at 4K resolution and maximum graphics detail would be virtually identical, save for a couple of increases in favor of the RX 6900 XT in some titles.

The strong point of everything, even here, is the price: 500 euros less than the competition, AMD manages to deal a considerable blow to the NVIDIA card, as confirmed by the benchmarks visible in the gallery just below. 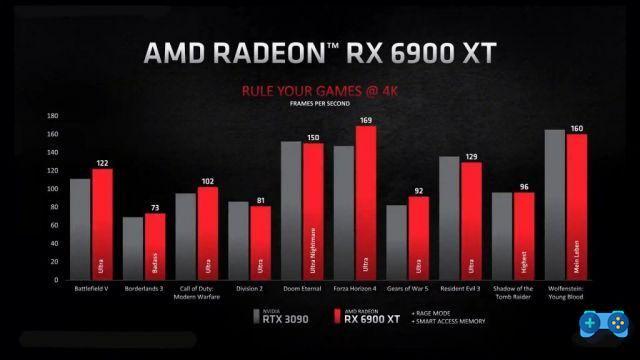 In the high end band, the favorite in the challenge between the two giants is undoubtedly the RX 6900 XT. As visible in the graphs, lunlike a good 500 € in the face of almost equal performance, it is the springboard to AMD. The RTX 3090 is undoubtedly more extreme and can have a longer career before retiring, but it is the price that “penalizes” it. Unless you want an ultra high end build based on NVIDIA GPUs, the RX 6900 XT is the best choice.