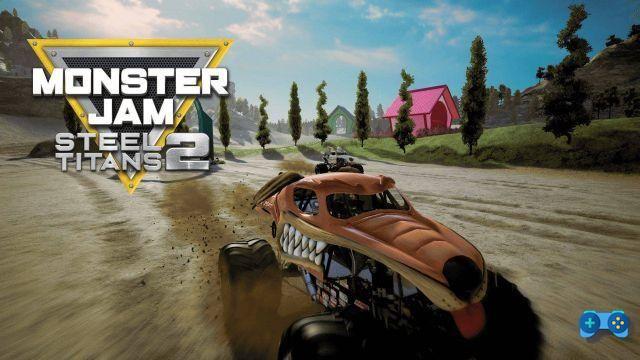 A little less than two years later, the successor of the game that will make us drive absurd Trucks, with gigantic wheels in crazy stunt, arrives on our PC and on our consoles (Nintendo Switch, PlayStation 4, Xbox One), Monster Jam Steel Titans 2.

Version tested: Playstation 5 (which should be identical to the PS4 one, if not perhaps for the faster loads due to the SSD)

Monster Jam is one of the very few titles in circulation inspired by the colorful world of monster trucks, or cars customized in an extreme way, which compete in events that are nothing short of spectacular.

The most famous of all are the American competition circuits, where this type of event has a huge following in arenas packed with spectators, who can watch the evolutions of these flying beasts, "gulping down" on beer and hot dogs.

Developed by Rainbow Studios, same Team of the first chapter and published by the well-known publisher THQ Nordic, the title follows in the footsteps of its predecessor, so if you have played the first, the sense of familiarity (let's call it that, ed) will be quite high.


It is also clear that since this is a game aimed at a probably not very large audience, the budget and the intellectual resources used were not huge, the fairly accessible launch price is a direct consequence.

Title clearly arcade-oriented based on the races of the infamous Monster Trucks, in this version, among other things, reproduced very well, we will have a wide choice of crazy, colorful and customized vehicles with the most extravagant liveries.

We will begin our adventures on four wheels through a tutorial that will guide us step by step to the first rudiments, up to the first race, all done in the initial area, of a vast open-world-like map, where we will find ourselves once the game is launched.

From the first half, piloting these beasts, through jumps, bumps, obstacles and so on, will not be easy at all; often we will find ourselves upside down and nothing less among the first things that the game teaches is the key to restore the car on the ground.

We will then have a career (and various special events), consisting of 21 chapters, divided into 5 different worlds to explore and 12 stages in which to compete, through which we will be able to improve the performance of our vehicles, expand our garage by unlocking gradually different vehicles and more.


Offline we can also play in split-screen, even from the Nintendo Switch even simply through the use of the two joy-con, or if we prefer we can throw ourselves into bitter online battles with other players from all over the world.

First small premise that we always want to make for those interested in the title: the game is well localized in Spanish, with the exception of a few small steps, but nothing complicated.


We will have 38 vehicles available, from very varied customization (we go from the school bus, to the ice cream truck, and so on), with different characteristics, some even iconic with various references to the Cinema.

So the choice of vehicles is there, between the vast map practically open world and the stadiums, we will have to explore, compete and even be able to discover hidden secrets in the various settings.

Monster Jam Steel Titans 2 is a light-hearted, immediate and fun game, all factors that make it a definitely not cult title, but excellent to be integrated into a personal playground, complementary to other more serious and demanding titles.

To mention the soundtrack, which faithfully accompanies our raids, always engaging, varied and apt with a playlist that is always suitable for the context in which it plays.

In our opinion there are no essential reasons to buy the game, but not even others that are completely impediments. It is clear that if you have already played the first chapter, this will seem rather than a sequel, a good Dlc.

The mechanics and structure of the predecessor have remained unchanged, without however wanting to take that extra step in order to attract new fans compared to those already present.

From the graphic point of view, considering that the game was programmed for old-gen consoles, the yield is rather mediocre and also the physics of the vehicles is sometimes not very credible, despite the declared arcade imprint, not infrequently witnessing absurd rollovers. or jumps from the unacceptable trajectory.

Unfortunately, the variety of maps does not extend longevity by much, considering that once we have carried out the present events, and discovered the few secrets, we will no longer have other reasons to continue exploring them; moreover, unlike the vehicles, which are finished in great detail, the maps always give the impression of being a bit bare, and not as deeply worked.

Monster Jam Steel Titans 2 does not feel like making the leap (paradoxical right?) And abandoning its comfort zone created with the first title, which is not without flaws, and evidently aims to consolidate its niche of fans of the genre. Being able to almost consider it more as a full-bodied Dlc than a game in its own right, it is immediate, light and fun, but unfortunately affected by objective limits that undermine its use in the long term despite the online component. Given the aggressive launch price, if you like the genre, you can take a look at it without big thoughts.

Do you want to complete all the achievements and trophies and know all the tricks, guides and secrets for your video games? SoulTricks.com is a group of video game fans who want to share the best tricks, secrets, guides and tips. We offer the best content to be a source of useful information, so here you can find guides, tricks, secrets and tips so you can enjoy your games to the fullest. Are you ready to get all the achievements of that game that you resist so much? Enter and enjoy your favorite video game to the fullest!
Cyberpunk 2077 Guide: The Best Cyberware ❯