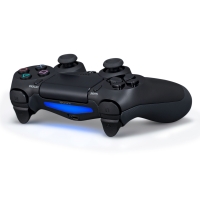 Frequently Asked Questions: Here is the section on the new Sony controller.

We report the useful translation made on PlayStation Blog, dividing it for convenience and ease of use in various separate articles. Index HERE

How long does it take to upload a DUALSHOCK 4?
It will take about two hours to fully charge a DUALSHOCK 4 once connected to a Ps4 or a charging device.

Can I load a DUALSHOCK 4 on my PS4 while I'm not playing?
Yes, you can recharge DUALSHOCK 4 while leaving PS4 on standby. European users will be able to do this by enabling the “Charging from USB ports” option found in the menu under Settings, Power Saving Settings.

How many DUALSHOCK 4 can I connect to my PS4 at the same time?
PS4 supports up to four DUALSHOCK 4 connected simultaneously.

How do I sync a DUALSHOCK 4 to my PS4?
To synchronize your DUALSHOCK 4 you will need to connect it to your PS4 using the front USB ports, just like with PS3.

How does the touchpad integrated in the DUALSHOCK 4 work?
The capacitive touchpad of the DUALSHOCK 4 supports drag and drop, flicking and multi-touch input. In addition, the touch pad is clickable. Developers will be able to choose how and whether to exploit these features. For example, in Killzone: Shadow Fall the touchpad is used to assign different commands to the player's OWL drones in the single player campaign.

Will the 3,5mm jack of the DUALSHOCK 4 support other headphones?
PS Vita headphones are fully supported. Other Third party headsets may support audio and chat features on PS4 but Sony Computer Entertainment cannot guarantee this.

Is it possible to set the game audio to come out from the headphones attached to the DUALSHOCK 4?
Yes, you can select the type of Output in the headphone options: “Chat Audio” or “All Audio”.

I have heard that the DUALSHOCK 4 is equipped with "enhanced vibration". What does it mean? What are the benefits?
The multiple motors that provide vibration to the DUALSHOCK 4 give PS4 games a greater degree of expression and immersion.

I have heard that the DUALSHOCK 4 has lower "latency" than the other controllers. What does it mean?
All wireless devices suffer from some form of latency, a small delay, for example, between pressing a button and playing motion on the screen. Thanks to new technology and hardware optimizations, DUALSHOCK 4 suffers from less latency than PS3's DUALSHOCK 3.

Will the DUALSHOCK 4 be able to connect to a PC?
Yes, you can connect a DUALSHOCK 4 to your PC using USB; the controller will support basic functions. We have no details to provide at the moment on full compatibility with DUALSHOCK 4 PC games.

What colors of DUALSHOCK 4 will there be?
The DUALSHOCK 4 will arrive in “Magma Red” and “Wave Blue” colors at the PAL launch scheduled for November 29th. Other colors will be available after launch. We will announce the release date in the future. Follow our web channels for the latest news.