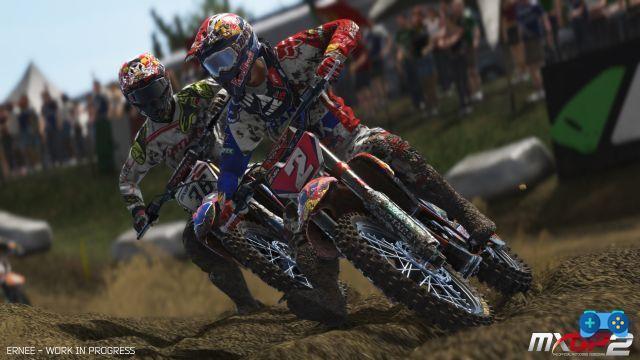 Milestone returns to the dirt road.

We know Milestone mainly for the annual development of official video games dedicated to MotoGP for nearly a decade now, which boast a tested and winning game formula that will satisfy all players and fans of motorcycle racing. In recent years, the developer has decided to also make official titles that dealt with the world of motocross, so as not to leave behind the lovers of two wheels on dirt. In 2012, therefore, MUD officially debuts, which offers discreet gameplay but which still remains a title for fans only, not enjoying the hoped-for success. Two years later, Milestone is back on track with MXGP, which instead boasts a richer and more refined game formula than its predecessor but which still remains anchored (allow us the pun) to the old gen consoles, which did not allow us to pull. out the best of the technical sector.

Now, the development house of the Bel Paese tries again with the sequel made for PS4, XBOX One and PC, MXGP 2 - The Official Motocross Videogame, proposing a very appreciable experience that we will describe to you with our review.

MXGP 2 obviously follows in the wake of the MotoGP games: as soon as the title starts, in fact, players are asked to enter their name, surname, nationality and other useful parameters to "create" the virtual alter ego. Then we get to the heart of the motocross career, as we have to choose ours preferred manufacturer from seven options (Husqvarna, Yamaha, KTM, TM Racing, Kawasaki, Suzuki and Honda), the name of the team and the logo, the latter selectable among some predefined but decidedly not very strong and minimalist; a special editor would have allowed to give a more personal touch to the whole. At this point, we still have to decide on our personal managers and our first sponsor from those initially available. The list is quite limited, but they are all real brands and can be swapped throughout the season to get even better rewards by meeting certain requirements. Plus, you can run in both MX2 and MXGP counting on the presence of real drivers, including Cairoli.

Perhaps one of the most interesting elements in terms of customization is the possibility of upgrade motorcycles: in addition to buying them, the credits earned in the race can be spent to make various improvements, ranging from a simple handlebar of a different color to match our livery up to exhausts, brakes and anything else that improve performance. Besides that, it is also possible modify the suit of our pilot from the helmet to the boots, and we must say that we appreciated the variety of objects present and the excellent colors available.

The new chapter of MXGP can count on a fairly solid gameplay and above all on a definitely satisfying and demanding driving model. As per Milestone tradition, players can adapt the game experience to their skills by changing the difficulty of the opponents and the in-game physics: well, if the latter is set to maximum, the races become very interesting and unpredictable since the our bike reacts in a very similar way to reality. Furthermore, the brakes are separated rather than joined and we must also take care to shift the rider's weight in the correct way, especially after a jump, so as to land without losing speed or, worse, falling and crashing the entire stroke.

Regardless of the physics selected, a minimum of skill is still required from the players, who must strive to better address the curves and irregularities of the track often using the clutch, which allows you to exit much faster if used properly. What leaves something to be desired, unfortunately, is theOpponent AI: at the beginning of the career, it is difficult to finish among the first as our bike is very slow and the riders go (apparently) fast, but as soon as we upgrade it, we begin to give the opponents several seconds of gap, even at more difficulty high if you are an expert in the genre. Moreover, the other drivers rarely engage in real brawls to gain the best position, and this makes the races quite “static” from the point of view of the action on the track.

The game not only revolves around Career, but offers several other ways in which to have fun and challenge opponents for hours and hours. The single player is certainly very full-bodied, as it ranges from the typical grand prix and timed challenges to more interesting and challenging events such as the Monster Energy FIM MXoN, that is the motocross of nations where you can race in the shoes of famous riders. The mode also debuts Stadium Series, which for the first time allows us to race in stadiums on indoor circuits, a good new entry that fans will surely appreciate. Finally, they could not miss the real events, which in the style of those present in MotoGP make us protagonists of races or special moments that occurred in the motocross seasons. The multiplayerinstead, it has the usual modes, so fast races, leagues and little else that can interest only the real fans who want to test their skills against other players. Finally, let's spend a few words on the tracks: Milestone has entered all 18 official circuits of the motocross world championship as well as some indoors in Stadium Series mode. Among the playable tracks, therefore, there are Maggiora, Mantua, Talavera de la Reina, Leon and many others.

A technical sector to improve

If Milestone gets along just fine in the realization of the gameplay, unfortunately it still remains "behind" on the technical side. The graphic sector, by itself, it is very good, with faithfully reproduced tracks and a great care in the animations of the drivers, but unfortunately the frame rate is the sore point: during the races it is generally stable despite being set at 30 fps, but that cannot be said the same for replays, which very often fall below that threshold. Note however on the first person view, which although not seen from inside the helmet gives great emotions.

even the audio compartment is no exception: the sound effects of the motorcycles are practically all the same (obviously the difference between a 2-stroke and a
4 strokes can be heard, God forbid) and in the long run they turn out to be really monotonous and almost annoying, perhaps also due to some music that is too “noisy” as a soundtrack. Moreover, as in the Milestone games, on the other hand, there is still a commentary and the award ceremony on the podium, which we have been waiting for for a long time but still do not show up either in MXGP or in MotoGP.

In short, the developer should revolutionize and focus more on the technical profile of his titles in order to aim even higher and, perhaps, grab a slice of more demanding users.

Do you want to complete all the achievements and trophies and know all the tricks, guides and secrets for your video games? SoulTricks.com is a group of video game fans who want to share the best tricks, secrets, guides and tips. We offer the best content to be a source of useful information, so here you can find guides, tricks, secrets and tips so you can enjoy your games to the fullest. Are you ready to get all the achievements of that game that you resist so much? Enter and enjoy your favorite video game to the fullest!
Vampyr, requirements and exit ❯

Middle-earth: Shadow of Mordor review The Lord of the Hunt DLC

Add a comment from MXGP 2 Review - The Official Motocross Videogame