Milestone has for many years now held the "monopoly" on the development of official motorcycle racing video games, especially on MotoGP. Also this year, the company is ready to get back on track with MotoGP 15, a title that certainly sees some news on the gameplay side but, at the same time, still some shortcomings insistently requested by the fans. Will the development company be able to further improve the MotoGP 14 game formula that convinced us? You just have to read our review to find out what this new chapter has in store for fans of the genre.

Only tough bones in MotoGP

One of the main innovations introduced in the MotoGP 15 Career mode is certainly the possibility of having the private team rather than being part of existing teams. After a few races, in fact, we will be free to choose whether to run for a team or accept a contract among the various ones that are proposed to us by various sponsors based on our performance on the track; it will in any case be possible to change our choice during the career. If we choose the "most difficult road", that is the one of the personal team, we will have access to new and interesting features including the customization of motorcycles. Milestone, in fact, introduced the GP Credits, which we will earn at the end of each race weekend and can be used to purchase new models and liveries. In addition to the personalization of our rider as regards number, nickname, suit accessories, driving style, gender (it will also be possible to impersonate a woman) and so on, therefore, in MotoGP 15 we will also have the possibility to choose the colors of our racing car (on the basis of the chosen livery) up to that of the rims.

The private team also allows you to choose a logo from the predefined ones and the name of the team; we will also have a custom box with the colors we have previously chosen for the bike and the logo affixed to the walls. As always, before the race it is possible to modify the set-up of the bike in depth according to our needs and to improve the engine and other components using the data packages. What disappointed us a bit about this new private team feature, though, is the fact that it can choose only one sponsor and not different: by this we mean that if Alpinestars offers us a contract we will be able to accept it, but if we later want another more attractive one, this will not add to the livery but will replace the previous one, thus leaving the bike quite thin in terms of sponsors present on it. In short, therefore, we will not have one like those of the real teams which, on the contrary, are faithfully reproduced with every single sponsor logo. We will always have to start from the bottom as far as the classes are concerned, then from Moto3 to then move on to Moto2 and finally to MotoGP, each with increasingly tough opponents to beat. Our motorhomeFurthermore, it will see a different furniture from one class to another and inside it we will always be able to watch official images and videos taken directly from the real races.

Le game mode are practically the same as MotoGP 14. Among the "standard" ones we can choose between Instant Race, Grand Prix, Championship, MotoGP Career and Time Trial, while it was safety car mode removed probably due to the fact that, in fact, it wasn't that particularly interesting. Special events, on the other hand, see four different modes:


If there is one thing in which Milestone is really doing well, it is undoubtedly the will to bring back the notoriety of old MotoGP glories in the spotlight, thus allowing legendary riders to play in historical events as well as in a normal race. On appeal, unfortunately, Giacomo Agostini is still missing, one of the undisputed world legends in the 60s and 70s. As in the previous chapter, it will also be possible to impersonate a Valentino Rossi at the dawn of his career, Loris Capirossi, Max Biaggi and other important figures in the motorcycle scene. Like any self-respecting title in the series, of course, all the official MotoGP circuits are available:

La difficulty was increased compared to MotoGP 14, in fact Milestone has added the “Very easy” level for novices in the genre, while the more experienced will already have a hard time starting from medium difficulty; choice certainly appreciated by players who love sweaty wins and not given away. The other pilots, moreover, will fall much more easily and it is not uncommon to see accidents between them, a sign that the AI ​​has been slightly improved. in this respect. However, what does not allow you to have a perfect gaming experience from every point of view is still the absence of the award ceremony on the podium accompanied by the relevant national anthems and the crowd that attends you. In case of victory, we will simply see the festivities in the closed park, while in case of arrival in less than brilliant positions, our driver will head to the pits. Both situations, unfortunately, sin both for the lack of people and for the total absence of sound, which would not have required particular efforts to be inserted.


La multiplayer mode has remained unchanged, so we will be able to embark on a championship in which opponents are controlled by other players, challenge them in normal friendly races or split times or play the Sprint Season mode. Undoubtedly, all this makes MotoGP 15 very long-lived and full of challenges.

Excellent technical profile… but not perfect

Milestone has always had one maniacal care especially in the creation of the circuits, which are faithfully reproduced in every detail as well as the bikes, which also boast every single sponsor present in reality. The graphic sector it seems to have been slightly improved, with smoother and more realistic rider animations although there are still some small burrs during falls and rare polygonal interpenetrations. Unfortunately, as previously mentioned, the closed park and the outside of the garage are very sparse in terms of people; it would have been admissible if there had been some nice little umbrellas, but even these can only be seen from the motorhome.

As regards the audio compartment, the developer has not yet implemented a commentary that brings the level of realism and fun to the maximum for any player, a highly requested feature especially by fans of the series. However, the pre-race technical commentary is always present, in which the voice of the famous Guido Meda who had given way to Mauro Sanchini in the previous chapter returns. The bikes don't differ much in the roar of the engine except from one class to another, but they are still good. Here too, as already pointed out in the chapter above, the sound is totally absent in the parc fermé and in the return to the pits, a not insignificant lack that may not go unnoticed for everyone. 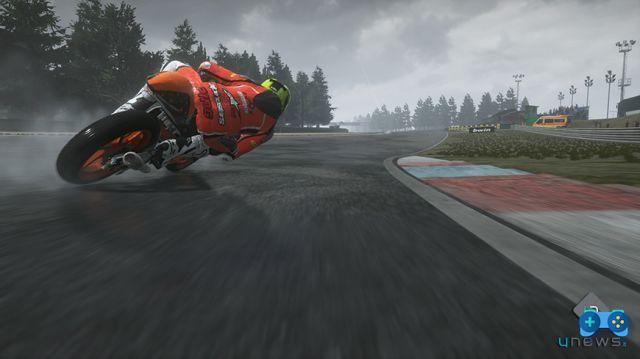 Do you want to complete all the achievements and trophies and know all the tricks, guides and secrets for your video games? SoulTricks.com is a group of video game fans who want to share the best tricks, secrets, guides and tips. We offer the best content to be a source of useful information, so here you can find guides, tricks, secrets and tips so you can enjoy your games to the fullest. Are you ready to get all the achievements of that game that you resist so much? Enter and enjoy your favorite video game to the fullest!
NBA 2K18, the demo The Prelude will be available from tomorrow ❯