Hollow Knight is a game full of mysteries and pitfalls and that is why we want to help you with our guide. Here you can find a path to follow to tackle the areas without losing any objects, as well as advice on how to tackle enemies and bosses. Especially among these pages we try to give you some ideas for follow all the clues of the plot deeply intricate title.

We had left on the bench of the Queen's Station, near The Last Beetle. This could be the perfect opportunity to return to Dust to make some purchases, if you have a fair amount of Geo with you. In the gloomy city our friend Gerontias will be able to tell us some details about the people who live in the fungal forest that we are about to face. "Not quite insects and not quite plants" were once a peaceful people. The insect will also explain to us that the area is infested with a terrible stench... 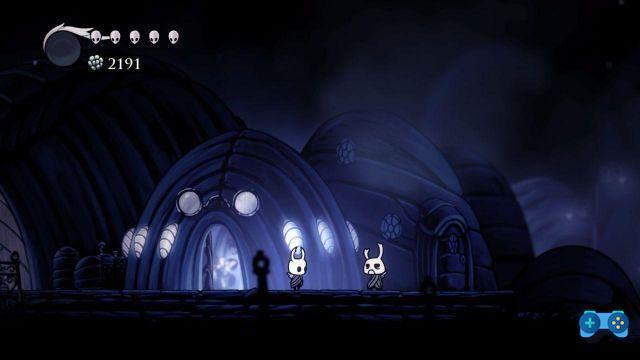 Near Iselda's shop we can see the haughty Zote. The insect so similar to us will continue to reaffirm its lack of sympathy, telling us about its imaginative - and phony - enterprises. He will also accuse poor Gerontias of telling lies. In particular it will refer to dreams, which once again become a topic of discussion. Although according to Zote "dreams are for those who are too weak to really live!"


Still to the right, near the well, is another new character: Tiso. This annoying-voiced bug is a challenge-seeking warrior that he tells us about an arena in the depths of Hallownest... 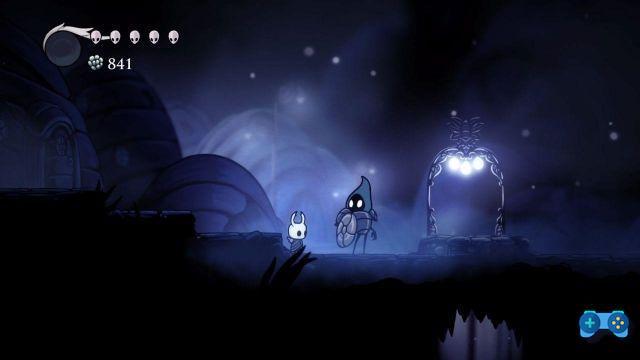 The only truly essential object in the two shops in Pulveria is the Lumide's lantern for sale at Sly, but we don't need it yet. But know that we will soon have to face this expensive purchase. It could be the case to scrape together some Geo, perhaps keeping them from the bank. As for Iselda, the Merchant's pins which sells, but you may also need others markers, which are never too many. All the items for sale are still useful, if you are full of Geo.

From Sly, on the other hand, the Fragment of the Mask and Receptacle, but I advise you to check in the menu how many other fragments you already have. They are only worth buying now if you are missing a single fragment to complete a mask or a single receptacle. If you've followed this guide so far, don't buy them, you don't need them. We can instead buy the Simple Key to get to know another character. Don't worry if you don't have enough money right now, you can safely postpone this purchase, as well as use this key in a different way after purchasing it.

Once you have bought the key, let's go to the far right of this area, in what looks a lot like a cemetery. There is a line of dialogue from Gerontias in the game about the character we are going to meet. At the bottom there is a door with a simple lock. 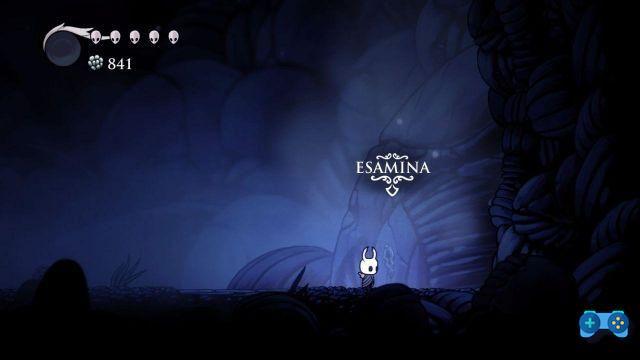 Upon entering this house we can see eyes on the right, which belong to Jiji. This new character, just awakened from a long sleep, will tell us about the regrets we leave behind in the form of black spots. At this point, Jiji will check if we have left any regrets behind us. In the event that you should have died without having recovered your shadow - with the Geos attached - you can ask the new friend to call back your regret here. In return this strange insect will want a Rancid egg. Useful, right?

At this point we return to the Queen's Station, leave here and go up to the top right, to finally enter the Fungal Caves. An area full of vapors and somehow welcoming, albeit mysterious. 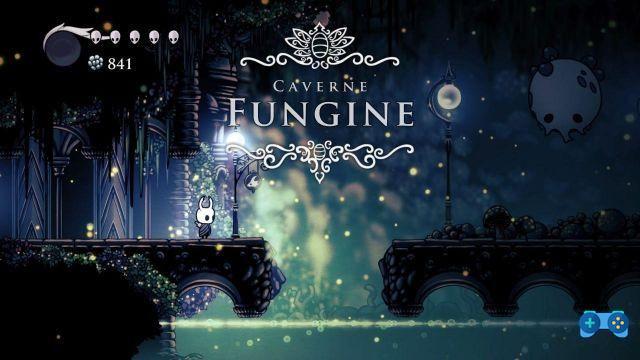 Here we are immediately greeted by one Sporona, enemy that floats in the air and shoots toxins when we pass under her: it will not be difficult to hit her in the jump. Having overcome this enemy we can recognize the "sheets" used by Cornifer to draw his maps, which suggest we go down to meet him. Here are also two harmless Sporelle. Going down to the area below we immediately hear the humming of the cartographer. It is not difficult to find it, at the bottom left. The good Cornifer will refer to "very territorial types that inhabit this area", but above all to "strange ones thin creatures”Who live in the deepest part of the area. "They seem to be intelligent".

The cost of the Mushroom Caves map is 75 Geo and of course I recommend that you buy it. Continuing to talk to Cornifer he will also refer to theunbearable smell present in this area. 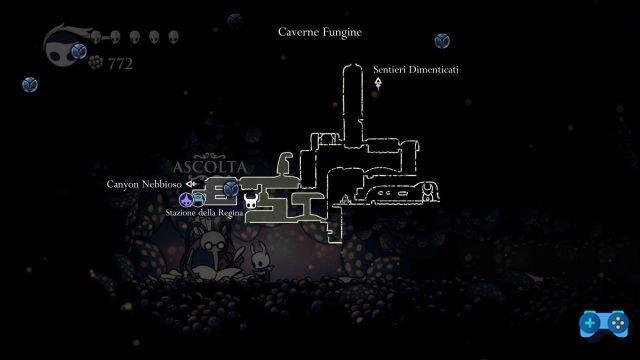 From this point we go back up and continue along the road that goes up. To get back up you can hit those weirdos purple mushrooms to bounce on it and give you a boost. After the two Sporelle, there is another Sporona. Leave it alone and go down. Pass the Rhino Wreck and watch out for the toxins thrown at you by the enemy above. Kill the Fungale wreck, which attacks much like Volatile Moss. You can continue to the right, or if you feel able, tackle that small area above, where in the middle of some dangerous Sporie, you will find a Hallownest Seal, salable object later, for now useless.

Way to the top

In the next room, to the right, there are more Sporias. In this area there is also one strange hollow trunk, on the right, which will later turn out to be a totem pole. To be able to read it we need an amulet, which we do not have for now. If you want you could leave a marker here, to remind you of this place of the Fungal Caves. Going up you will also notice an unreachable road with a bright object near a corpse and a lever. My advice is to come back here later when you have both the amulet and the power up needed to reach that lever. 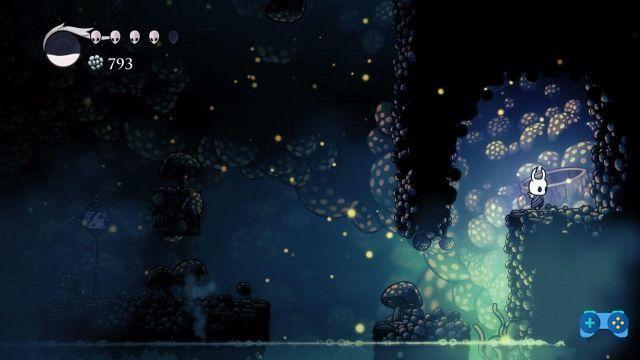 Continuing up we will meet one Micoistrice near a Geo block and above a barred door. To continue, we go to the right. Here are the first ones Mycotic Warriors, many impetuous mushrooms that attack in jump or head-on. Be careful and try to figure out when to jump to dodge them. Be careful: they also leave a trail of toxic spores. In this room we also find the harmless Mycotins, who will flee in fear. To get past the area we just have to go up and go left.

So let's go back to the previous area and we will be able to open the barred door using the lever. Continuing upwards, get ready to face a boss fight! 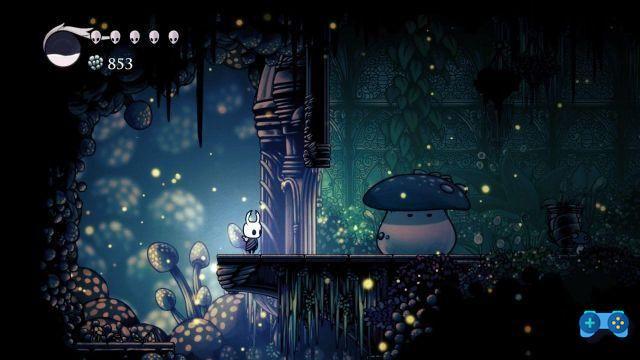 Boss: Mycotic Orcs
These two large fungi attack in basically two ways: by spitting spores at you or by repeatedly hitting the ground with their heads. The tip to overcome the fight is to focus on one of the two enemies first, quickly eliminating the crossfire. Attack when the two are spitting and keep your distance if they are hitting the ground. In a short time you will take out both mushrooms.

Once this clash is over, a very useful one will fall from the ceiling socket for amulet! We then continue to the right and then again upward. This part of the Mushroom Caves tests our platforming skills, forcing us to jump from point to point while being careful not to fall into stagnant water. Continuing to climb I invite you to observe a strange small pond that separates us from a passage: the only way to reach it seems jump into the water. For now, let's go further. 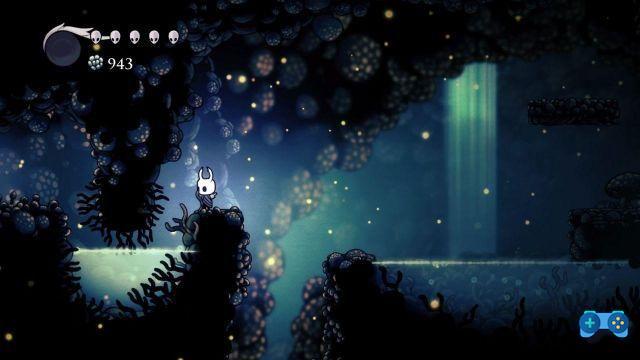 Exactly in front there is another passage, which leads us to a bench next to a strange blind insect. Speaking with him we will find out what his name is Paw-eater and he also asks us to give him some money. Paying the price of 86 Geo, he will open a small shop with three amulets for sale. The three amulets Fragile Heart, Fragile Greed and Fragile Strength they are potentially very useful, especially the last of the three. The only problem is these amulets they will break if we die while wearing them, forcing us to go back to Mangiazampa and pay him a further penalty for fixing them. Purchase at your discretion. 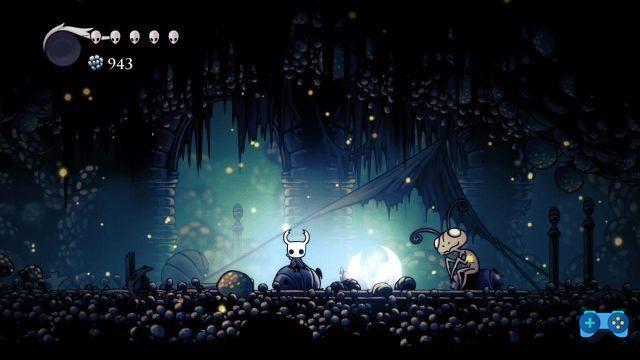 On this bench, near this new merchant, this episode of our guide stops. Soon we will continue the exploration of Fungal Caves!

Back to the guide of the Misty Canyon

Do you want to complete all the achievements and trophies and know all the tricks, guides and secrets for your video games? SoulTricks.com is a group of video game fans who want to share the best tricks, secrets, guides and tips. We offer the best content to be a source of useful information, so here you can find guides, tricks, secrets and tips so you can enjoy your games to the fullest. Are you ready to get all the achievements of that game that you resist so much? Enter and enjoy your favorite video game to the fullest!
Assassin's Creed Odyssey, trophy guide ❯

Red Dead Redemption 2, where to find all dinosaur bones

Monster Hunter Rise - Guide: How to craft and self-create items

Add a comment from Hollow Knight, guide and lore: Fungal Caves I