… And Kratos launched himself from the highest mountain in all of Greece.

"After (almost) ten years of suffering", Kratos he returns once again to retrace the painful events he experienced through his bloody path of revenge. L'hack'n'slash most loved by owners of Sony consoles, the look is redone again and, after the re-release in HD released in 2010 on PlayStation 3, the ghost of Sparta now also arrives on the new Sony portable console, with a graphic design and a control system adapted to the PlayStation Vita system.

Authors of the restyling are this time the Sanzaru games who, after the Sly Trilogy, have put their hand to this new edition of the two PS2 masterpieces by Santa Monica: we are obviously talking about God of War and God of War II.

A mortal and his eternal challenge to the gods

Set in the time of ancient Greece, of the rivalry between the poleis and the capricious gods of Olympus, God of War and God of War II have told, and still tell, a compelling and fascinating story. Without, however, dwelling too much on Kratos' challenge to Ares first, and then to the Uranian gods, what interests us today is to evaluate the technical realization of the re-edition of the two chapters on PS Vita.


First of all, it is worth mentioning that the God of War Collection for PlayStation Vita is available from 8 May 2014, both in retail and digital delivery versions, at the budget price of respectively 29,99€ e 24,99€. This version also benefits the cross-buy with the HD edition for PS3: by purchasing the PS Vita version you will be able to download the version for the home console on the PS Store, for free; conversely, those who already own the HD Collection will be able to take advantage of the offer only if they have purchased the two titles in digital version.

On the other hand, inexplicably, the cross-save functionality is missing, which in our opinion would have been a very welcome addition to both new and old players. Also distinguished are the 71 trophies available, which will be painstakingly regained even on the portable version (and the last trophies before platinum are not exactly a walk in the park).

Not worthy of Olympus

On a technical level, the work of Sanzuru has mainly focused on adapting the PS3 version to the characteristics of PS Vita. So first of all we have a reduction in resolution: we go from 1280x720p to the canonical 960x544p supported by the handset. Unexpectedly, however, a downgrade is unfortunately also on the front of the framerate, far from the stable 60fps seen on PlayStation 3 and with the first chapter of the collection often suffering from slowdowns. We point out that, fortunately, the situation is much better in God of War II, which maintains much of the great quality seen on PS3; however, we find it hard to understand why a title in the first chapter of this series, originally less expensive in terms of graphics, was more difficult to adapt to a console that is not exactly weak in terms of technical potential.


Still on the visual front, not even this time the movies have been adapted to the 16: 9 standard, creating an annoying reduction in image size during cutscenes.

Only discreet even the new one control system, which hardly adapts to the portability needs required by the console. Using the touchpad to replace L2 and R2 is quite uncomfortable and not infrequently we will find it difficult to open (or avoid opening) a case while keeping our fingers firmly on the back panel. The choice of entrusting the Kratos run to the front touchscreen is also quite questionable. Absent the use of the PS Vita gyroscope for the sections in which our hero will find himself walking in the balance: also due to a disallowed alignment of the left analog, moving in these conditions will be frustrating from time to time.

Overall we are therefore faced with an adaptation work that, for God of War, does not excel from any point of view and which bases its strength only on the intrinsic quality of the title that it brings back into vogue, a true milestone of the genre of belonging. As already mentioned, however, the situation is very different with regard to the second chapter, which, apart from the defects already reported in the control system, has very little to envy to the version that we have been able to admire on our PlayStation 3. 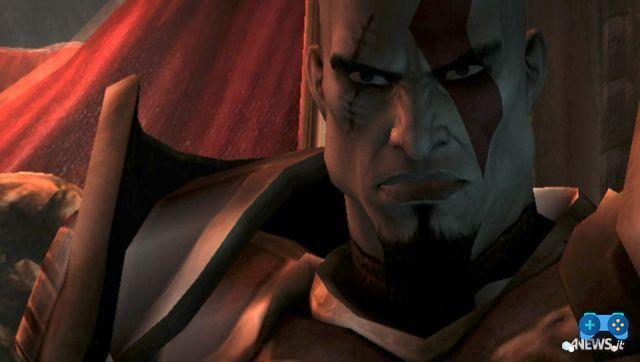 La God of War Collection for PS Vita ultimately offers a great opportunity for historical fans and new players to get their hands on two of the most fun and spectacular hack'n'slash of the last decade, even in their latest portable incarnation. A poor conversion work however undermines this production otherwise essential for all owners of Sony PlayStation Vita, who will nevertheless be able to seize a great opportunity to always have at hand the power of an invincible Spartan warrior, "blessed" by the warlord. in person. While the realization of God of War II is really good, for God of War we have not noticed a decisive step forward compared to what we already had with the not excellent remote play between PS Vita and PS3.

Despite the defects, however, the approximately 30 hours of play and a frenetic and exciting gameplay, together with the low price and the cross-buy with the PS3 version, oblige us, despite the defects, to recommend the purchase of two of the titles that they made the era unforgettable PlayStation 2.

Paladins: the Fourth Season at the start, all the details ❯