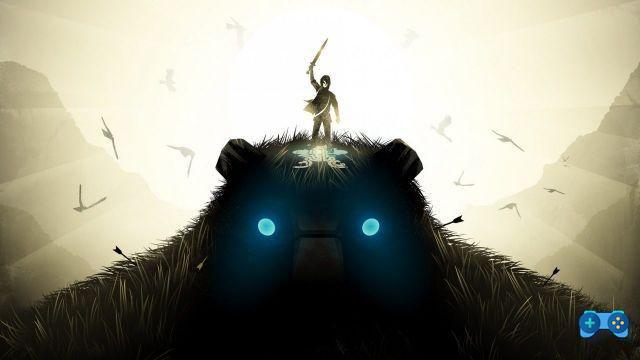 Shadow of the Colossus is one of those titles that enter your heart, which manages to convey emotions and sensations like few other games can do. The work of Smoking Ueda, originally published on PlayStation 2 in 2006 and in 2011 on PlayStation 3 in HD remastered version, is finally available also on PlayStation 4 console. We are faced with a remake, edited by the guys of Bluepoint games, who had already worked on the PS3 version. So what should we expect? Yet another remaster? Any additions here and there? A commercial gimmick and nothing more? Absolutely not.

The goal, which led to a new reinterpretation of the game, in our opinion was that of preserve Team ICO's masterpiece. To make sure that even the new generations could appreciate one of the best titles ever. The restyling work was certainly not easy. If the PS3 version saw the "simple" addition of a few more small details and focused purely on guaranteeing a high definition gaming experience, as far as the PlayStation 4 version is concerned, adding some graphic detail was not enough , to improve some technical gaps or to add hypothetical contents. We needed to do more and ensure that the proposed experience was the best possible, even superior to the original version.


So if you are curious, whether you are a historical fan of the title or new recruits approaching the game for the first time, to know if Shadow of the Colossus has kept expectations or not, keep reading our review!

On the edge of the world

Shadow of the Colossus is a very special 3D dynamic / puzzle adventure. Wander, our protagonist and his faithful steed agro, go to the Shrine of the Cult. A mysterious place, on the edge of the known world. The target? Bring back the soul of a beautiful girl, Mono. Nothing is known about her, only that she was sacrificed for her "cursed fate". Arrived at the Shrine, a mysterious entity, Dormin will reveal to us that in order to succeed in the mission, we will have to face 16 giants. Only in this way will the young Mono be able to return to the living. 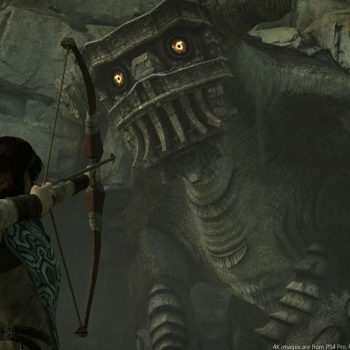 The peculiar characteristic of Shadow of the Colossus is that there is no living world, no city to explore, no dungeons to face and overcome, people who can give you an indication or simply to talk to. There are only huge green meadows, arid grasslands, mountains and ravines. From time to time we will see some passing animals (lizards, hawks, doves) and nothing more. We will ride through the wastelands for kilometers, at times, apparently, it will seem like we are going around in circles. Due to these elements and the similar universe, Shadow of the Colossus, in part brings to mind another masterpiece always branded by Ueda, or ICO. As Ueda himself stated, although the proposed gaming experience is diametrically different, Shadow of The Colossus is the predecessor of ICO.


The giants we have previously named are mysterious creatures. Some of them have the humanoid aspect, others of gigantic animals, such as: birds, reptiles and mammals. They share the fact that they have strong armor and are almost impossible to break down. To defeat them we will therefore have to identify the weak points hidden under their fur. These weaknesses, once identified, will shine. All we have to do is hit them with well-aimed blows until the life energy of the colossus runs out. The arsenal available is limited, it consists of a sword and a bow. The sword, in addition to being an offensive weapon, has an important guiding role. Lifting it in the air, a light beam will show us the way to go to reach the next colossus. 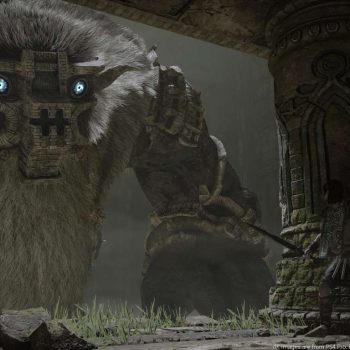 After facing the first colossus, which represents a sort of great tutorial, in your wandering through the magical world of Shadow of the Colossus, you will encounter increasingly extraordinary and difficult to defeat "monsters". You will have to squeeze your brains to understand how to get on the back of them, keep under control the huge sphere of the grip, which will exhaust rather quickly and that if it drops to zero, it will make you take a good flight and pay attention to sudden movements every colossus will have. To accompany us in our adventure, there will be the masterly notes by Kô Ôtani. The soundtrack of the game is something sweet and is among the best ever heard in a video game.

Raise your sword into the light

As for the revisiting work done by Bluepoint Games, already authors as mentioned of the PS3 version of the game, in addition to having worked on the remastered version of Uncharted and Gravity Rush, it was nothing short of exceptional. The problems of the original version were characterized by an unstable frame rate and a system of commands that to say woody is an understatement. The remastering work, almost complete, as the game code is that of the time, led the Texan boys to rewrite the graphical interface, made more streamlined and to revise the command system. Now the original system has been added a more modern control system. You perceive a greater control of the protagonist, a lower input lag and an improved fluidity in the movements even if some small uncertainties persist, as is the taste, when jumping on the ledges or when we are "saddled" to the giants. 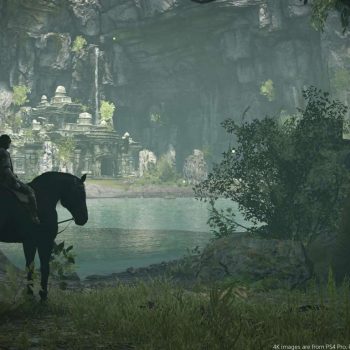 For the new generation, however, the difficulties of adaptation remain. In Shadow of the Colossus, climbing is not automatic, it will not be enough just to jump and press a button as it happens in Uncharted, Tomb Raider or Assassin's Creed. The grip is entrusted to two buttons. You will need to jump with the X button first and then hold R2 to grab the hold. If you accidentally let go of the R2 button, Wander will automatically lose his grip and greetings. The situation will become even more difficult when we are clinging to the thick fur of the giants. They will tend to struggle to get rid of us and if you miscalculate the times of the "grip" sphere and it runs out you will fall with the risk of even dying and starting over from the last check-point. To avoid painful departures, you will not only have to be quick to move once you have hooked the grip on the colossus, but also to leave it when you find yourself in situations of "tranquility" in which you can simply stand up and reload the sphere of the grip. We guarantee, from experience it is clear, that the feedback has improved a lot compared to the original version, then advancing in the game, you will be able, without problems (or almost?) to assimilate the system of controls.

As for the purely graphic aspect, we are facing the best (as expected) possible edition. The amount of polygons added is surprising. The grass was previously only characterized by the green color, but we are also talking about 12 years ago eh, crevasses, scattered ruins, lakes, waterfalls, have been finely modeled. The glance is truly sensational, it will not be like the most recent productions but it will often happen to stop to admire the view. The giants also benefited from a good restyling job. The fur is easily identifiable, it moves with every movement of the creature, with gusts of wind or when Wander climbs on it. Perhaps the only flaw, if we can speak of a flaw, is that the high definition has made it “easier” to identify the weak points. Even at a distance of meters it will be quite easy to spot them, which instead at a resolution of 512 × 224 was slightly more complicated. 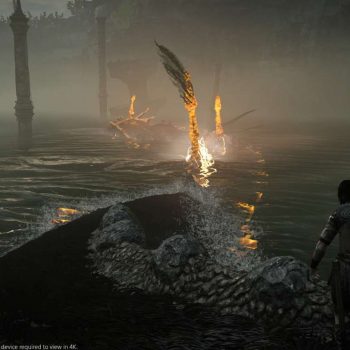 The only two sore points concern the management of the camera, sometimes not in line with the game action and the obvious pop-up phenomena that occur when passing from one area of ​​the map to another, for example when we cross the bridges or we are getting closer and closer to the mountains or wooded areas characterized by thick vegetation that slightly struggles to load.

We tested the game on the PS4 Slim. For owners of For PS4, however, there is the possibility to choose between two modes: the Performance at 60 fps and the Cinematic that prefers greater graphic detail (UHD 4K) and reduces the frame rate to 30 fps. These options, although designed for those who have a 4K UHD TV, allow for slight improvements even for Full HD TV owners as the 1440p are downscaled on Full HD panels.

It takes about 12/14 hours to finish the game. We can freely explore the map, not very large, but still of a good size. There are some small side quests. We will be able to collect lizards, useful for improving the sphere of grip, fruits, useful for improving vital energy or going to pray at the sanctuaries, (if you need a hand there is our guide to collectibles). After completing the first run of the game, you can try your hand at time trials (Time Attack), you can try to defeat the giants within a set time, the Memory mode, returning to the places where you have faced the giants and "praying" near their remains you will be able to fight against them again, but using your current level of health and stamina. Also present the New Game + mode more difficult to deal with. There are also some collectibles. In fact, the Bluepoint team has introduced gold coins. If you collect them all they will give you access to a really good bonus that we will let you discover.

Shadow of the Colossus
8.9 / 10 Soultricks.com
Buy on Amazon.com
Available on PS4
For

- The remake makes the game even more magical and evocative

- A few pop ups too many

Summary
The guys from Bluepoint Games have once again shown what they're made of. They hit the right points, even managing to improve the Fumito Ueda masterpiece. There is no doubt that this work of reinterpretation has been designed for those who have never approached the game, but it will certainly make happy, thanks to a stunning graphics, those who have already had the opportunity to appreciate Shadow of the Colossus in its original version.
gameplay
Graphics
Sonoro
Longevity
Final judgement

Do you want to complete all the achievements and trophies and know all the tricks, guides and secrets for your video games? SoulTricks.com is a group of video game fans who want to share the best tricks, secrets, guides and tips. We offer the best content to be a source of useful information, so here you can find guides, tricks, secrets and tips so you can enjoy your games to the fullest. Are you ready to get all the achievements of that game that you resist so much? Enter and enjoy your favorite video game to the fullest!
Cyberpunk 2077: CD Projekt Red publishes the official requirements ❯

God of War, our review

Add a comment from Shadow of the Colossus review