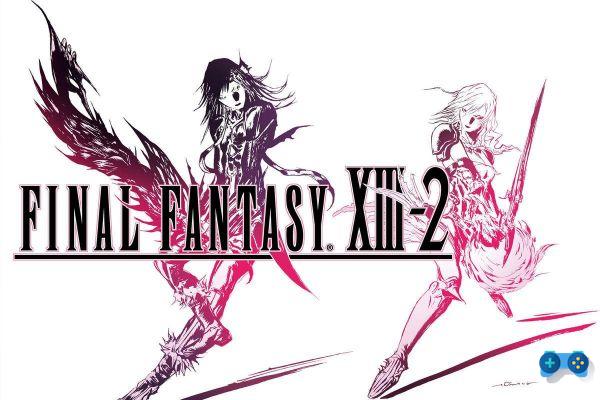 How to travel back in time and win again!

The solution is based on the European version for Playstation 3.

The solution of Soultricks dedicated to Final Fantasy XIII-2 last chapter baked by Square Enix, will guide you in recovering the "padlocks" special objects that will allow you to unlock new areas to replay through the Histeria Crux; to the passage tests of the temporal labyrinths.

We will guide you in the recovery of the catalysts and artifacts that will allow you to upgrade the monsters that can be combined in Final Fantasy XIII-2 and how to unlock all the alternative endings also called "paradoxical endings".

Below you will find the complete list of padlocks and their location.

Padlock of calm - Place: The void beyond

Lock of prediction - Place: The void beyond

How to unlock the Endings of the Paradoxes

In Final Fantasy XIII-2 it is possible to see alternative endings. Most paradox endings require that you finish the main story at least once in order to gain the Paradoscope Privilege. At this point you will have to go back in time and unlock some previously blocked areas and end the objective / clash with the enemy on duty to view the alternative ending!

END OF PARADOXES - THE HEIR OF CHAOS

END OF PARADOXES - FATE AND FREEDOM

In order to unlock this end of the paradoxes you must during the conversation with Lightning at the dock select "YES" during the Reflection. By doing so you will get the “Destiny and Freedom” Transcript Fragment that you will need to use in the Crux History.

END OF PARADOXES - A TIMELESS SKY

This End of the Paradoxes can only be obtained after finishing the main adventure as it requires the Paradoscope Privilege, this too is unlocked in the crux historia but I recommend that you have the characters of at least 6000 pv.

END OF PARADOXES - THE FUTURE IS HOPE

This End of the Paradoxes can only be obtained after finishing the main adventure as it requires the Paradoscope Privilege. At this point you must activate, then the Paradoscope and close the portal of Academya 4XX DD at the Historia Crux.

END OF PARADOXES - A GIANT MISTAKE

On your first visit to the Ruins of Bersah 5DD, you defeated Atlas, using the control device to weaken him. But if you come back for a second visit, there will be the possibility of engaging in a lethal fight, I advise you to be at a high enough level as the fight will be challenging.

END OF PARADOXES - THE TRUTH OF VANILLE

This End of the Paradoxes can only be obtained after finishing the main adventure as it requires the Paradoscope Privilege. This will also unlock via the Historia Crux!

Only when you have unlocked the Serendipity destination within Historia Crux will it be possible to go from that moment to the "Mystic". The building will be located southwest of the Temptation Square at which point you can acquire your first Privileges. As the game progresses, upon reaching each Milestone you will have the opportunity to acquire different and increasingly useful privileges for the advancement of the story.

Below is a list of all the privileges and how to unlock them:

This privilege will be granted automatically during your visit to the Monk, this power is used to activate a Moogle throw at the Advanced level. Using this privilege in particular places you will have the possibility to find seven crystals.

You will need to launch the Mog into the crater behind the Impact Site.

Launch the Mog on the central island from the Crystalline Marsh.

Launch the Mog under the Cocoon hologram.

Launch the Mog into the Black Desert near Chocolina.

It will be assigned automatically during the first visit to the Mystic; this power increases the price of each item you sell in Chocolina by 10%.

To get it it will be necessary to collect all the fragments at the Cime Abiette 200 DD and 10 DD; power increases the chance of receiving the crystal from a monster by 20%.

Power available at the end of chapter 5

Available at the end of chapter 5

To get it you will need to complete the secondary mission Master in Paradoxes at Academya 400 DD.

To get it you will need to collect all the fragments of the Particles and Gifts of the Hunters category, including those for the boss of the Plains of Archylte

It will only be available after completing the story

To get it, you'll need to collect all the fragments in all versions of Oerba, including the End of Paradoxes in 200 DD

To get it, you will need to collect all the fragments of the Academy Rewards and Mooguri Pearls of Wisdom categories

To get it you will need to collect all the fragments

Artifacts will be needed throughout your Final Fantasy XIII-2 adventure to unlock portals. The portals in question are: "luminous portals", to be activated, require a specific artifact and unlock destinations that will be mandatory within the plot.

Let's see them together below:

ARTIFACT OF THE GIANT

The Giant's Artifact is obtained by progressing through the impossible-to-miss main storyline!

ARTIFACT OF THE ECLIPSE

It is obtained by advancing in the main plot, precisely after the defeat of Atlas and unlocks the portal in the southern area of ​​the Ancestral Ruins that you will need to access the Yaschas Mountains.

It is obtained by advancing in the main plot, only after the defeat of Atlas and unlocks the portal in the western area of ​​the Ancestral Ruins this here unlike the previous one you will need to access the Sunleth reserve.

It is obtained by advancing in the main storyline only after talking to Hope, he activates the portal east of Paddra's Canyon and unlocks Oerba 200 DD.

This Artifact appears on the roof of the old school after the fight with Caius Ballad.

Use the Mog in Action ability to find it, next to a treasure sphere precisely in the south east area of ​​the Archaeological City of Paddra.

Obtained after defeating the Habanino in the Wooded Fel Group.

Obtained after defeating the Habanino in the Arboreal Colonnade.

ARTIFACT OF THE TOWER

ARTIFACT OF THE REBIRTH

Obtained by advancing in the main storyline Impossible to miss!

You will receive it from Alyssa during the main storyline.

It is automatically obtained during the Impossible to Miss adventure!

The artifacts don't end there.

There is another type of artifact that will unlock “dark portals” these portals can be unlocked by primitive artifacts.

Below I will list them and show you where to find them:

This primitive artifact is recovered using the Mog in Action skill, immediately after learning how to use it through the tutorial.

It can be recovered, using the Moogle Throw ability, on the side of the house near the big tree.

It is suspended in the air on the east side of the wild path. It can be recovered by using the Moogle Throw ability.

It can be found inside the Crystalline Marsh on a ledge under the slope to the northwest. This can also be recovered by using the Moogle Throw ability.

It will be assigned to you automatically after completing the time maze. (If you have difficulty see the section above)

It is located on an internal walkway to the west on floor 50.

It will be found, with the Mog in Action skill, in the southeastern part of the alleys.

It can be recovered, using Mog in Action, after completing the location near the prophetic source in the Farseer monument.

The catalysts can be left on the ground by the monsters you will encounter during your adventure and some of them you will also find them for sale at Chocolina, most of the time, at a rather high price! They are absolutely necessary for the development and enhancement of your favorite allies.

Below you will find the Prodigy Biological Catalysts!

Below you will find the Mechanical Catalysts of Prodigy!

Below you will find the Biological Catalysts

Below you will find the Mechanical Catalysts