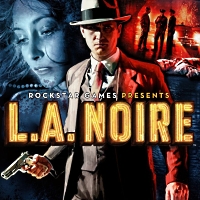 How to become the best detective in 40s Los Angeles.

Team Bondi has achieved LA Noire, a detective adventure set in late 40s Los Angeles, taken from its heyday for the growing success of Hollywood and its cinematic films, and at the same time shrouded in a veil of criminality that undermines its image. As Cole Phelps, the player must participate in different situations ranging from the simple shooting to the most intricate investigative skeins where the first necessity is the intervention of a skilled detective to unmask the culprit by bringing to light the evidence and perhaps a deposition of guilt.

To do this, we indicate below how to solve each game situation, to then collect the Trophies and Objectives of the title produced by Rockstar Games.

Let's start with one of the easiest situations, finding the Police badges:

Police badge # 1
Where is it: Grauman's Theater
Looking at the theater, you will see a long red carpet with two more small ones on each side of the entrance to the theater. Look in the one on the left to find the badge.

Police badge # 2
Where is it: Hotel Roosevelt
Look for the area that exits the road to find the badge.


Police badge # 3
Where it is: Max Factor Building
Go and get the car placed in the fenced area and collect the badge near the dumpster.

Police badge # 4
Where it is: Musso and Franks
In the rear area the parking area, the badge is located near the entrance near a green ledge.

Police badge # 5
Where it is: Crossroads To The World
Starting from the main area, walk towards a small path that leads upwards to find the badge on this path.

Police badge # 6
Where it is: West Lake Tar Pits
Under the portico of the small white building, among the tar pits.

Police badge # 7
Location: LA County Art Museum
Looking at the museum opposite, head right towards the staff parking lot. Once here, continue left heading towards a path lined with low hedges, which leads to a metal staircase where the badge is located.

Police badge # 8
Where it is: Bullocks Wilshire
Inside the atrium, take the stairs to the left and going down is the badge.

Police badge # 9
Where is it: Intolerance Set
Enter the car through the gate. Take the corridor to the right, turn left, and go down the stairs. You will find the badge on the narrow corridor.

Police badge # 10
Where it is: Macarthur Park
On a barrel between the rowboats.

Police badge # 11
Where it is: Los Angeles Examiner
At the corner of a flower box located on the back left of the building.


Police badge # 12
Where it is: Rko Theater
Lying on the ground at the main entrance in front of a movie poster.

Police badge # 13
Where it is located: LA Public Library
Climb through the gutter pipe at the back of the building, and then climb the scaffolding to reach the main roof. Turn left and you will find two large cylindrical shaped tanks on either side of the platform. Jump to the platform to find the badge.

Police badge # 14
Where it is: Pershing Square
On the table next to the diner in the shape of a train car. (An old railroad car converted into a night place).

Police badge # 15
Where it is: Hall Of Records
On the right hand side of the reception desk inside the Hall of Records.

Police badge # 16
Where it is: Union Station
From the front door, turn left. You will find it third on the ticket stand from the right.


Police badge # 17
Where it is: Chinatown
You will find it between two statues in a narrow alley on the west side of Chinatown.

Police badge # 19
Where it is located: 4th Street Viaduct
Head under the bridge, and at the canal there is a support center with a ladder. The badge is placed on top.

Police badge # 20
Where it is: Main Street Terminal
In front of the red subway car on the tracks.

As for the investigation techniques, these are divided between the clues to be searched and the interrogations to be carried out. Finding all the interesting details and asking the right questions leads to the maximum score for each closed case. Remember that side missions may appear in a different order than the one shown here.

In the beginning Cole Phelps is a police officer and the player's first impact is in the search for a weapon following a shooting. Search the alley for clues until you discover that the gun is on the roof of the building. Climb up the gutter pipe to collect the revolver. Head to the gun shop to find the owner (Schroeder Errol), catch him after punching, then rummage around the cabinet to find some clues. 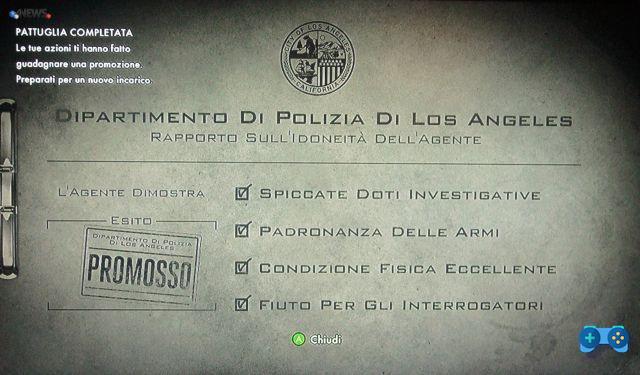 There is a shooting that broke out during a bank robbery. Clean up without dying and killing your mate.

You have to chase and catch a thug who is out on parole.

You are on the verge of a crime. One person (Cage) was killed with a gun. It is located in the garbage can right next to it. Search the corpse to find any clues. Enter the shop and question the saleswoman. Here the solutions to the respondent's answers are Lie and selecting the pearl purchase receipt as proof. Now you know the name of Mr. Kalou, involved in the affair. During the second question, question the answer. Ultimately accept the last answer as Truth. Go to the gun shop before passing by Mr. Kalou, to find out other clues such as having bought the weapon recently, obviously once you go to Mr. Edgar Kalou, he runs away. Chase him, capture him and then interrogate him. The solution to the questions is: Lie and choose the proof of the purchased gun, Doubt to discover the hatred towards Mr. Cage.

Do you want to complete all the achievements and trophies and know all the tricks, guides and secrets for your video games? SoulTricks.com is a group of video game fans who want to share the best tricks, secrets, guides and tips. We offer the best content to be a source of useful information, so here you can find guides, tricks, secrets and tips so you can enjoy your games to the fullest. Are you ready to get all the achievements of that game that you resist so much? Enter and enjoy your favorite video game to the fullest!
NVIDIA Tegra X1, the superchip as powerful as Xbox One ❯

Apex Legends, the tricks to become the best