FIFA 21 - FUT Ultimate Team, the most buggy players of the Spanish La Liga 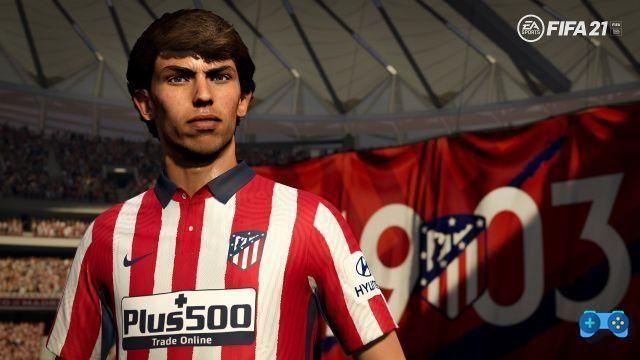 Let's get back to the field with this new guide by FIFA 21. This time we will show you what they are the most buggy players of the Spanish Liga. A league that has increasingly lost interest over the years as many players think that to play with the Spanish Liga it is necessary to have the top players. We guarantee you that it is not so, it is possible to make a good buggy team, even without having Lionel Messi.

Geronimo Rulli (OV 82): the Villarreal goalkeeper is certainly the best choice if you are on a tight budget and are looking for a fairly capable extreme defender in goal.

Tomáš Vaclík (OV 82): as an alternative to Rulli we recommend the Sevilla goalkeeper. Good stats, with three 80+ values ​​and a very low price could make it attractive to most players who have recently purchased FIFA 21.

Renan Lodi (OV 81): As for left-backs, in addition to the more expensive and famous names, there is no great choice. Renan Lodi is fast and has good dribbling. Unfortunately, he sins in the defensive phase, but with a Chemistry Style card he can certainly have his say.

Álex Moreno (OV 77): Faster than Lodi but defensively quite limited. We recommend it as this year the game is even more about speed. With his good 89, he can certainly be a valid offensive weapon and can - with the necessary limitations - lend a hand in defense.

Gabriel Paulista (OV 82): Rocky defender, maybe a little slow, but we are sure he can give any attacker a hard time. With a Chemistry Style card that increases his speed, he could really be a great central defender.

Marc Bartra (OV 80): Good defensive stats, minus those related to the physique. But good Marc can be a good substitute.

Nacho Fernandez (OV 80): Economic defender but with excellent potential. Speed ​​(78) and 80 of physique and defense. He could easily be the owner in any La Liga team.

Cover (OV 81): Incredible full-back. Fast and very strong physically (88). Discreet even in dribbling. Indispensable for the team of the most buggy players in the Spanish La Liga

Hector Herrera (OV 81): The Mexican of Atletico Madrid cannot miss in the squad of the most buggy of the Spanish Liga. He has appetizing statistics and can easily present himself in the offensive phase and both lend a hand in defense.

Martin Ødegaard (OV 83): The talent of Real Madrid has now reached consecration. A fantastic player who in addition to good stats also has 5 * skills.

Fernando (OV 83): Defense seems almost optional this year. For this reason it is necessary to have at least one midfielder with good defensive statistics and physically strong. If you don't want to spend a lot, Fernando is for you.

Nabil Fekir (OV 83): It certainly needs no introduction. Fekir is a real pain in the ass for any player who comes up against him. When he's on the pitch, it's painful!

Sergio canales (OV 82): A player perhaps overlooked by many but who has very respectable statistics. He excels at dribbling, shooting and passing. We advise you to give it a chance.

Geoffrey Kondogbia (OV 79): It will no longer be as fresh as a couple of years ago but the good Geoffrey thanks to his 88 physique can annoy any striker.

Lucas Vázquez (OV 80): A lot of quality. Not too fast but still a valid option if you don't want to spend a fortune. Has 4 * skill and weak foot.

Angel Correa (OV 82): Correa is a phenomenon, we cannot deny it. He has a drunken dribbling good speed and on par with Vázquez 4 * skill and weak foot.

Ousmane Dembélé (OV 83): A player who in reality plays almost with a dropper. In FIFA 21, however, he is among the most titled. The reason? Great speed and dribbling that leaves almost every opposing defender "dry". If used as a reserve, it will split the opposing rear guard in two.

Yannick Carrasco (OV 82): Carrasco is in our opinion the most complete left wing of the Liga. Really cool and if you have any leftover credits we recommend you go straight to the IF version.

Iñaki Williams (OV 81): One of the most buggy strikers in the Spanish La Liga. He sees the door as few and if launched in speed it will not be easy to stop him.

João Felix (OV 81): An excellent striker. Certainly not very fast but able to have its say.

Paco Alcacer (OV 81): If you are looking for a fairly fast player with a devastating shot, Paco is for you.

Ezequiel Avila (OV 79): The last striker we recommend to you in the squad of the most buggy players in the Spanish Liga is Ávila. He is not always in the ideal position to finish but he manages to be appreciated thanks to his good speed, shooting (81) and physique (83). A valid alternative to the previous ones. 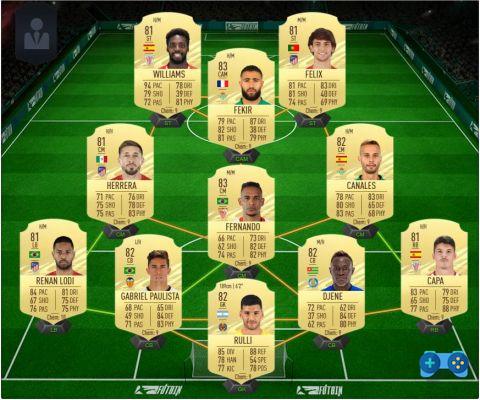 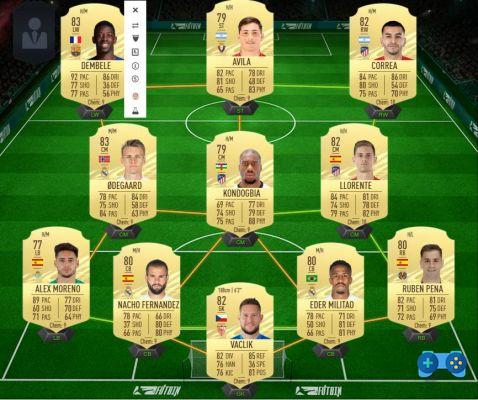 add a comment of FIFA 21 - FUT Ultimate Team, the most buggy players of the Spanish La Liga