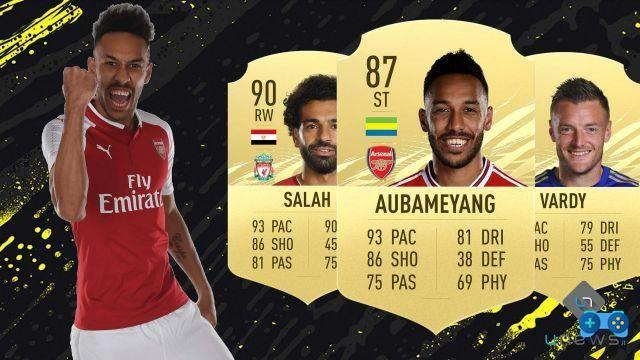 After the excellent guide of our Andrea, dedicated to the BPL midfielders in FIFA 21, it's time to get to the highlight of our guide. In fact, we're going to talk about the Premier League's strongest strikers. Several world stars play right in the English league. We will list the best ones, but whether or not they will be functional to your game is entirely up to you!

Mohamed Salah (OVR 90): Immovable owner in Liverpool and inevitable top player to be included among the strongest forwards of the Premier League. Deadly left and lightning-fast sprint make him almost impossible to stop players.

Bernardo Silva (OVR 87): A player who focuses on quality. He is not very fast but he is able to enchant with his dribbling. In addition, he can easily serve the attackers in the area thanks to his 83 pass.

Riyad Mahrez (OVR 85): The City player does not differ particularly from Silva except for one element. In fact, he has 5 * skills that greatly facilitate his most spectacular plays and which are all the rage this year in FIFA 21.

Gareth Bale (OVR 83): Gareth can't miss on a BPL team. It has a ridiculously low price but real world-class stats.

Sadio Mané (OVR 90): It costs a lot, a lot, but it will make you fall in love. Sometimes he sins in the finalization phase (even if he has 90) but we guarantee you that there is no defender who can hold up. For this reason he enters by right into the list of the strongest Premier League strikers present in the game.

Raheem Sterling (OVR 88): Valid alternative to Mané. It will drive your opponents crazy. All in all, the price is not that high.

Sergio Agüero (OVR 89): The Argentine player remains one of the strongest strikers in the Premier League. The shot is no longer very fresh - although in our opinion EA Sports has been too severe this year with the Kun - but it is compensated by a phenomenal dribble and shot to say the least.

Harry Kane (OVR 88): The English striker makes height his main weapon. Added to this are a devastating shot, an imposing physique and good skills in both dribbling and passing.

Aubameyang (OVR 87): Perhaps the most devastating striker in FIFA 21. We favor him as a substitute as he has incredible speed. This makes him a tough nut to crack for any defender to face in the second half. In addition, the shot of 86 makes him a real sniper. If you add an understanding style, maybe Hunter, well, expect your opponent to do a rage quit.


Roberto Firmino (OVR 87): Good Bobby represents the all-round striker. He is quite agile, thanks to high dribbling and hardly misses in front of goal.

Jamie Vardy (OVR 86): “Vardy's on fire, your defense is terrified”, says one of the most famous choirs for the Leicester forward. We guarantee that Jamie is capable of terrorizing any defender and extreme defender. His great speed and his right foot are enough for him!

Timo Werner (OVR 85): The good Timo has already managed to conquer Chelsea (12 appearances and 8 goals scored). He still costs a lot in FIFA 21 but he is absolutely one of the Premier League's strongest strikers. If you have credits to spend, buy it first now.

Raúl Jiménez (OVR 84): We recommend the Mexican striker because from a quality / price point of view he is nothing short of exceptional. He is very tall (190 cm) and has three values ​​above 80 and has them in the fundamental statistics for a striker. dribbling, shooting and physique.

Anthony Martial (OVR 84): While in past years he played as a left winger, this year Martial became a forward. This will make all those FIFA players happy who adapted it just like ATT. Speed ​​and dribbling are his main weapons. With Predator it becomes unstoppable

Gabriel Jesus (OVR 83): The Manchester City forward is one of the most used forwards of the past two years. As a substitute it can really make a difference. In addition, its price is quite affordable.

Richarlison (OVR 81): Everton player price plummeted within a month. Now you take it home for very few credits. Also to have as a simple bench.

Michail Antonio (OVR 78): A forward feared by all FIFA players. He does not have great statistics, in fact we recommended him in the guide of the most buggy players in the Premier League but in his own way he always manages to bag the ball.

Rodrigo (OVR 82): A rather complete player capable of cutting the opposing rear guard in two thanks to his immense speed. If let in at the 70th minute, no one can take away the curses of the opposing players

Do you want to complete all the achievements and trophies and know all the tricks, guides and secrets for your video games? SoulTricks.com is a group of video game fans who want to share the best tricks, secrets, guides and tips. We offer the best content to be a source of useful information, so here you can find guides, tricks, secrets and tips so you can enjoy your games to the fullest. Are you ready to get all the achievements of that game that you resist so much? Enter and enjoy your favorite video game to the fullest!
Ghost Recon Alpha, the prequel movie of Ghost Recon: Future Soldier ❯

Add a comment from FIFA 21 - FUT Ultimate Team, the strongest strikers in the Premier League (BPL)