The most realistic Vikings of recent years.

Ragnarok! Odin! Valhalla! These are always the big words that accompany video games starring the Vikings. But how many of us have always wanted a game more faithful to what are the true customs and customs of the much loved Norse warriors?

Logic Artists, an independent studio based in Denmark, tries with this title to be as faithful as possible to the historical-cultural tradition of the Scandinavian peoples, as it had already done with the previous title Expeditions: Conquistador (set in the age of Spanish discoveries, 1518). With this goal in mind, any reference to the supernatural or magical powers that, instead, characterizes the vast majority of titles with this same setting has been excluded from the gameplay. No more half-naked warriors two meters tall fervent by the will of Odin and able to defeat armies with a blow of the ax, no spells and curses or traps of Loki. Only men, covered in thick furs and equipped with rudimentary weapons, guided by hopes and passions against the icy landscape and the dangers of that ruthless world that surrounds them.

A long and tortuous journey.

Set in 790 AD, Expeditions: Viking tells the story of a Viking clan that, following the untimely death of its jarl, is taken over by the protagonist, the eldest son of the deceased. 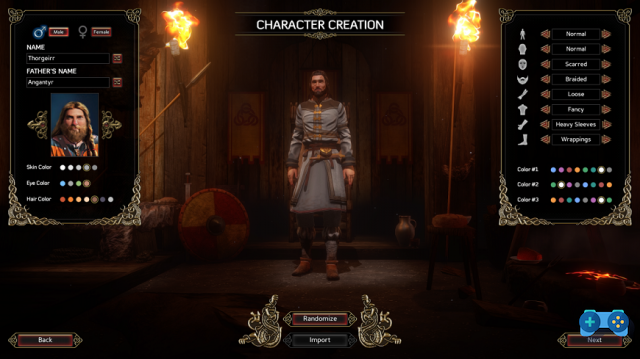 Forced from the first minutes to face disputes and fighting, the new chieftain will have to prove that you are worthy of the role you have just inherited and strive to advance what was initially only a small village.

Precisely this need for expansion and growth characterizes the entirety of the work, which will lead players to a continuous journey between the Norse lands and the seas to the West, which according to the legends host islands laden with treasures ready to be plundered in an attempt to bring the clan to an unattained splendor.

Starting from the context, we can unbalance ourselves in applauding the guys from Logic Artists. In fact, from the very first moments of the game, it is noted that behind the development, a in-depth study on historical reconstruction. Despite the fact that we have opted for the use of characters who did not really exist, one cannot help but breathe a truly realistic atmosphere with attention to every detail. Starting from the banquet in honor of the deceased jarl up to the construction of his own boat, each setting and object is permeated by details that an enthusiast of those eras can only appreciate.

From the first minutes we will go to approach one very marked role component. The first screen that appears before us is in fact that of creating one's own alter-ego, divided into a meager and unsatisfactory variety of aesthetic possibilities and a much more rich and deep category of selectable skills. These skills will characterize the type of character with which we will approach the world but it must be remembered that there will always be alongside us in our adventure numerous supporting actors, some permanent, others linked to short missions. Each of them can be developed with the skill points earned through the missions and will characterize our group. Despite the characters in most situations are not dubbed, appear to be well characterized in the dialogues, all written with a language appropriate to the setting, in fact each of them will react to the choices made based on their morale and their level of trust in the player. The abilities that characterize them, in combination with the equipment that we will assign them, will be fundamental in the battles, strictly in shifts. Each fight will in fact take place in a sort of virtual "chessboard", of variable shape, within which each character (ally or enemy that is) will go to occupy a hexagonal box and to act respecting the pre-established turns. The various fighters will have skills ranging from the most classic attacks with melee or shooting weapons, to more complex mechanics whose mastery will be essential to get the better of the fierce opponents. In fact, each of them, from the very first bars of the game, will be lethal (especially at advanced difficulties) if underestimated, and can hurt our characters in a more or less serious manner, with consequent temporary lowering of their statistics. 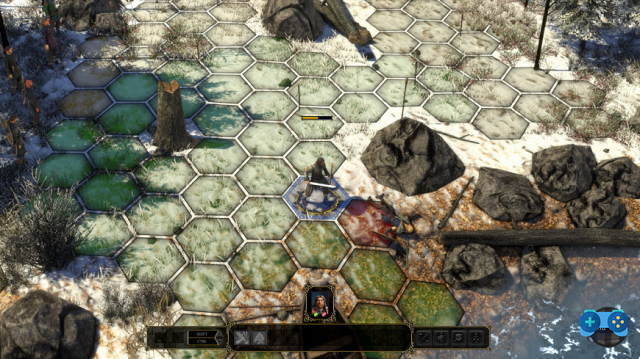 The combat system is joined by several other mechanics. The story will be carried on through a large amount of dialogue (unfortunately all strictly in English) that will allow us to make choices capable of directly impacting the morale of the characters and the reputation of our clan in other villages. Since our group of adventurers will have to perpetually travel from one point to another on the map, they will be inevitable numerous stops in the camps scattered throughout the game world. Once freed from any occupants, these will allow us to rest our heroes, make them heal from wounds that if not treated could worsen and become lethal, and make them perform various types of actions related to the skills we have chosen. All this through a management screen that divides the stops into 4 shifts during which we will also have to worry about schedule patrols to defend ourselves from the assailants. The presence of a crafting system simple but effective that will allow us to equip our fighters with increasingly powerful weapons and armor, according to our personal preferences. Regardless of the basic roles of our teammates, we will be able to specialize them as we wish, but at the risk of finding ourselves in the team of ineffective handymen.

There is also a sort of timer which will advance with the completion of the missions and at the end of which our adventure will end, regardless of the results obtained. This detail that will make the completionists turn up their mouths but that we imagine can give a minimum of replayability to the title.


To mention the lack of a multiplayer component, instead, present in the previous chapter of the series, which however allowed the developers to churn out a much more satisfying campaign.

Expeditions: Viking it shows its weaker side when it comes down to technical analysis of its characteristics.

From a graphical point of view, the game has taken a few steps forward compared to its predecessor. The external environments are alive and characterized by quite credible vegetation, weather conditions and streams, the internal ones reach enough but do not fully convince.

Different speech for i 3D models of the characters, all unconvincing in characterization and variety. The animations, despite the use of motion capture, are only acceptable in human characters and decidedly subdued in animal ones.

Enough the audio sector is good, with a soundtrack that is not extremely varied but well capable of accompanying the various events. Too bad for the almost totally absent dubbing.

The tested version (1.4) did not have major bugs but was plagued by some technical problems such as an inexplicable stuttering in some unexcited game situations and an unresponsive framing system.

Do you want to complete all the achievements and trophies and know all the tricks, guides and secrets for your video games? SoulTricks.com is a group of video game fans who want to share the best tricks, secrets, guides and tips. We offer the best content to be a source of useful information, so here you can find guides, tricks, secrets and tips so you can enjoy your games to the fullest. Are you ready to get all the achievements of that game that you resist so much? Enter and enjoy your favorite video game to the fullest!
FIFA 21 - FUT Ultimate Team, the strongest full-backs in Serie A ❯

Review in a nutshell: Valheim