An extension for an already perfect strategy.

Golden Realms is the new expansion for Age of Wonders III - the strategic of Triumph Studios - which will further enrich the gaming experience with new scenarios, units and races. These will change the approach to the title and give more flexibility to users, who will be able to adapt to whatever game strategy is necessary to achieve victory.

Age of Wonders III it was already an excellent product that any lover of the turn-based strategy genre craves; the depth of the game mechanics, the well-studied scenarios and the vast availability of buildings, structures and units are able to adapt to the tastes of each individual player; the new expansion expands the boundaries of the title by giving a further choice to players who will now be able to test new strategies and then apply them on the battlefield.

With the expansion Golden Realms are introduced within Age of Wonders III the halfling; these little creatures bring with them a real new race, equipped with new units and buildings, and mark the entrance of a new game mechanic, which takes the name of Fortune Mechanics, which will give units the ability to dodge attacks as long as their morale is high. The new expansion will also allow us to play a new, unprecedented campaign, consisting of three scenarios within which it will be our task to guide the Halfling survivors of the massacre of Heartwood in the reconstruction of one's empire in an exotic land, where an ancient evil awaits us to be defeated; the new scenarios will also be available for free play and online play, on which we will spend a few words a little further on. Golden Realms will also introduce the Wild Magic Specialization, which will allow us to develop spells capable of disrupting the battlefield, and the Partisan Specialization, with which we can create hiding places from which to then attack the enemy.

The game system of Age of Wonders III however, it remains unchanged and provides for the creation of platoons consisting of a maximum of 6 units; each platoon will then have a certain number of movement points that it can spend to move during its turn and the cost of which will vary according to the roughness of the terrain. In fact, we will spend fewer movement points in the plains, while a greater number in the forests or hills.

It will be possible to face enemies by moving on them or, vice versa, if they decide to move on us. The battles can be solved automatically: the game will therefore make the movements, and then give us a final recap. Or, they can be fought manually, moving within the battle mode in a chessboard, with the same modes of movement on the game map, with the only exception that the ranged units will not have to reach the enemy units in order to attack.

Before passing the turn to the opponent, it will be good to remember that the game allows us to develop unique Skills and allows us to organize the production line of our cities, which will develop new structures, units or what we most want: the choice will be ours . Furthermore, it should not be forgotten that the production of units or new structures requires a well-determined number of shifts: in addition to some resources, it will therefore be necessary to carefully choose what to develop and what we really need. Producing a new building at the wrong time could mark the fate of our battle.


Although equipped with a purpose and a main objective, which will decide our victory or defeat, Age of Wonders III allows you to tackle different quests within the title and the new expansion Golden Realmsspecifically, it expands these possibilities by introducing the empire quest, which will allow us to obtain unique rewards provided, however, that we are the first to meet the necessary requirements.

Within the title, among the different units available, there will be heroes; like any other unit, it will be possible to increase its level, thus allowing it an upgrade to the statistics that will be indispensable in the success of a battle; once you have leveled up with a hero, it will be possible to assign some skill points to specifically enhance some statistics that will allow us to increase the effectiveness of close or ranged attacks, increase life points or increase our defense. Normal units, by leveling up, may change their specialization and their statistics, moreover, they will go up independently and it will not be possible to assign any skill points.

They will also be present in the title neutral structures conquerable by our units, dungeons to explore and which will provide huge rewards, especially in the form of equipment for our hero, and finally observation towers that will allow us to see the lands not yet visible to us. From this point of view, the new expansion also introduces new ones arcane treasures that will provide unique updates to our cities, making them unique and decreeing their greater strategic importance: building, in fact, a city close to a Crystal Tree will allow us to unlock theenchanted armory which will enhance our armored units.


We can therefore safely affirm and confirm the solidity of the entire system which, despite the numerous changes, still places us in front of a turn-based strategy with an easy approach and deep mechanics.

Even the part multiplayer it turns out to be quite solid and stable, guaranteeing a wide and diversified range of players of different skill levels, numerous scenarios on which to face each other and a not indifferent tactical component.

There is something wrong?

We got to try Age of Wonders III: Golden Realms on a PC with the following configuration:

It is certainly not a recent configuration, yet we have been able to withstand, with diginitose settings, even the most recent titles; however, Age of Wonders III: Golden Realms he had a rather hesitant performance. Although we continuously tinkered with the settings, also reducing the graphics settings to the minimum available, a sense of woodiness remained within the title during the various animations and we could not find the cause: we believe it is not a simple performance problem due to our configuration. The title, leaving out this small episode, however, is nice to see and well detailed: we are talking about a turn-based strategy with a top view, so it is not possible for us to analyze numerous factors. The graphic options within the menus are many and will be able to easily adapt to the needs and performance of each computer. From the sound point of view the title shows a good one OST and excellent sound effects that contribute to a truly unique gaming experience. 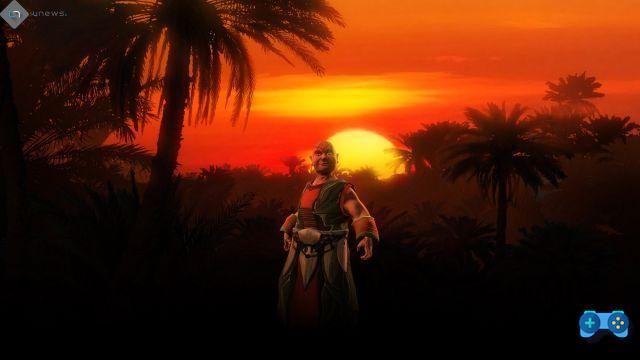 Age of Wonders III: Golden Realms exceeds the boundaries of the original title, ensuring greater flexibility, a vast number of improvements and a wide range of contents that will be added to those already existing. Pleasant the introduction of a new race, a new campaign and new scenarios that will break that sense of monotony that those who have played the title for a long time will surely have noticed. Triumph studios has managed to create an expansion that changes the approach to the title, offering numerous new possibilities, while still managing to keep intact the solid foundations on which it relies, guaranteeing a game system unchanged, despite the new units, structures and mechanics introduced.

Do you want to complete all the achievements and trophies and know all the tricks, guides and secrets for your video games? SoulTricks.com is a group of video game fans who want to share the best tricks, secrets, guides and tips. We offer the best content to be a source of useful information, so here you can find guides, tricks, secrets and tips so you can enjoy your games to the fullest. Are you ready to get all the achievements of that game that you resist so much? Enter and enjoy your favorite video game to the fullest!
Mountains of Madness: official launch date revealed ❯

Review in a nutshell: Drift 21