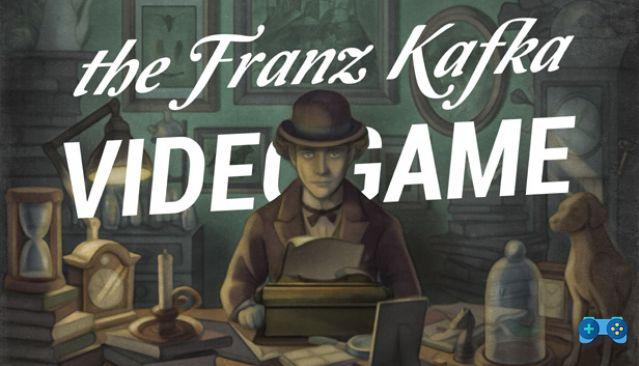 Video games and literary themes meet quite often within the same production, more rarely we start directly from a book (or by an author) to arrive at a game. Imagine then the cases in which a videogame production is carried out on the entire opus of an artistic personality: we could remember them using the fingers of one hand.

Denis GalaninHowever, he is a developer who creates his games only by merging the world of video games with that of literature, resulting in extremely valid games. Suffice it to mention his latest known production, inspired by Shakespeare's works: “Hamlet, or Last Game Without MMORPG Elements, Shaders, and Product Placement”. An extremely provocative and exaggerated title, for a game that nevertheless earned him many awards.

His latest work has also proved to be extremely valid, moving from the well-known London author to one from Prague, of which almost everyone has read something for better or worse: Franz Kafka.

The fascination that pervades the figure of the Prague writer has remained constant over the last century, making Kafka one of the giants of modernism. Most of his works, at least the best known such as The Metamorphosis, The Trial, The Castle (but also the Letter to the Father) are full of themes and archetypes of alienation, physical and psychological brutality, parent-child conflict, and feature characters in prey to existential anguish, bureaucratic labyrinths and mystical transformations.


Le Kafka's themes, the sense of bewilderment and anguish in the face of existence, load his work with philosophical contents that have stimulated the interpretation of his books especially since the mid-twentieth century. In his writings it is frequent to come across a form of psychological crisis that pervades the protagonist up to the epilogue of the narrative, and which gradually throws him into a careful introspective analysis. There will be a reason, in short, if Denis Galanin, in art mif2000, has chosen to focus his latest work on the productions of this author. And he did it above all for the atmospheres that he could brilliantly use.

In the course of the (short) narrative frame of The Franz Kafka Videogame we will play the role of a psychoanalyst specializing in hypnosis, able to investigate the unconscious of his patients to identify "problems" dating back to childhood that prevent them from being peaceful in adult life, and we will also become a cockroach-detective all taken by his mysterious case. However, both possibilities are opportunities to show the human frailty of the man Kafka: his biographical references are dense, to the beloved woman, to his father, to his family, to the emotional instability of his life. These are all elements that the discerning reader will immediately identify (perhaps not all, but most of them), while the occasional player will still be fascinated by the surreal and hypnotic atmosphere of the production.

A difficult but rewarding puzzle game

At an extremely low price, the mif2000 offers us a fascinating and absolutely unique adventure. Mind you though: it is also a very short adventure. Removed the brief parentheses of the narrative and a few lines of text or dialogue designed to be read in silence, we remain grappling with the "real" playful action. You may be wondering: "okay, how nice, a game about Kafka, but what should I do?"


You have to solve the puzzles. The Franza Kafka Videogame is this: an interesting and intriguing puzzle game, surreal, difficult, and at times just nonsense. From screen to screen you will find yourself grappling with puzzles to solve, aided by the mouse dart, your brain and, if you want, a couple of tips prepared by the developer, and which can only be used after having squeezed your brains out for a certain time frame. We used three adjectives to define the game experience: surreal, as the settings, situations and characters staged derive from the author's works, but also from the surrealist mood of the period, with sharp deviations towards the irrational. We will not be giving you a lesson in anthropology of the 900, but if on the screen you find a train that moves vertically, and to make it move you will have to use an eagle to take a cow away from the tracks, well, there is some problem with the sense of reality. And clearly that's fine: the reality too often is deadly bored, and Kafka was very bored.

The game is also at times openly difficult, in the sense that we do not know what damned action we must take in order to continue. Among other things, the difficulty is not well dosed, you go from fairly feasible puzzles to openly easy ones, and then slam your teeth into something indecipherable. And this is where the non sense: once you understand that situations, characters and objects, and even the links between them, are very often meaningless, you will be facilitated in reaching the resolution of the enigma. Our advice is this: think, of course, but if rational thinking fails at some point, then use irrational thinking. Remember that the protagonists are a psychoanalyst and a detective cockroach.


The technical and artistic sector also deserve a positive note: thank goodness we did not run into any slowdown or loading along the course of the adventure (and you are not always playing the devil's advocates by saying that the adventure lasts about 60 minutes , we already know). But above all, it is the stylistic choice of the images on the screen and the beautiful hand drawings to earn points on points a The Franza Kafka Videogame. It will also be difficult, it will be short, it will be meaningless at times, but to see it is beautiful, and above all extremely faithful to the atmosphere of the author's books. It is a bit difficult to explain in words, take a look at the images in the gallery of the article and you will understand: they are perfect drawings to render in a single image the twentieth century, surrealism, anguish, claustrophobia of Prague environments (and Germans) of the time, and many other things.

add a comment of The Franz Kafka Videogame Review