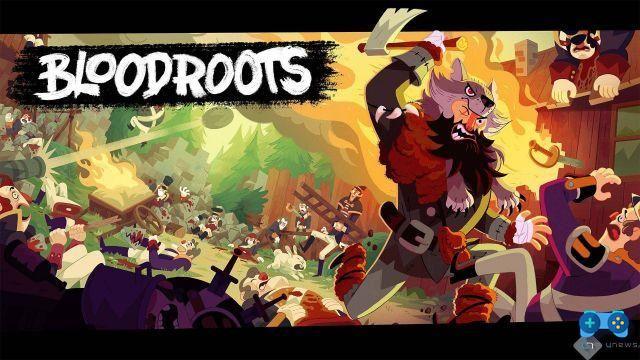 From the small Canadian indie studio Paper Cult, developer & publisher, already known not really for most Fat Mask, comes with a straight leg, without major warning, a small pearl destined to make proselytes in the months to come, Bloodroots, 3D isometric hack'n'slash.

The indie universe has a great peculiarity: every time it is able, through the games developed, to depress us, making us regret the few euros spent or make us be amazed and dismayed by the unexpected wonder. These titles rarely have major marketing behind them, or events approaching the release; very often we find them published on our favorite platforms and clients, without knowing anything.

All this almost always forces us to a blind approach, net of spoilers through video gameplay etc., which is a practice that can be associated purely with this type of games (economic, ed), considering that we would never go to spend € 50-60 for a blind title.

Despite the small expense, try to deny that little initial thrill, at the start of the game, the crucial moment to determine if it will be love at first sight, or depressing disappointment: Bloodroots will leave no choice, you will love it from the very first moment.

Bloodroots clarifies the "story" already in the first cut scene: the protagonist Mr. Wolf, head of a group of criminals, is attacked and rendered almost lifeless by a traitor of his gang. Upon awakening, the thirst for revenge will burn like an indomitable fire inside the veins of our alter ego and from there on a journey of revenge will begin, and what revenge!

The events of Mr. Wolf take place in a west, North American-like setting: everything is made decidedly bizarre and caricatured, but the result is pleasant to see, making it very fresh and decidedly humorous.

The game removed the first initial uncertainties about how to approach it, it will immediately become one speed run perpetual: the story will be divided into acts and chapters, with bonus levels, and level bosses, which will be the driving force between the various chapters through dialogues and fun cut scenes. 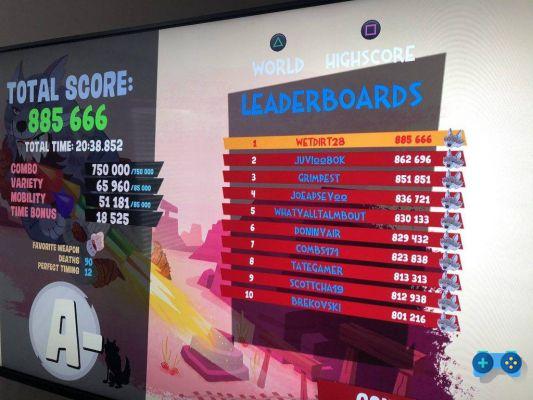 However, the real pulsating soul of Bloodroots, will be clearly shown to us from the end of the first level: in practice, for each of them, once finished, an evaluation will come out based on how we behaved, influenced by the time taken, number of combos carried out and other values.

The sum of all this will give us a final vote and place us in a worldwide online ranking. This detail is the driving force of the game, which, had we not been involved in this competition with other real players, would have been bored much sooner.


The hint of the initial story, the amusing curtains with the Bosses between one level and another, are the perfect setting for the increasingly growing and greedy desire to finish each level with the highest rating and consequently conquering a better place in the ranking.

Imagine a peaceful criminal, at the head of a band of fools, living in the remote lands of the desolate West, making his beautiful "criminucci" lovingly slaughtering his prey. One day he is betrayed and mercilessly shredded but miraculously survives. At that point, when he wakes up, his only remaining eye opens, and he stares into the void: the beast inside him is ready to unleash an unstoppable whirlwind of violence!

"There is no bad worse than a good when it becomes bad."

Each level is developed in small well-designed areas, also designed with a minimum of level design, which makes them more varied, deep and three-dimensional. You die with a single blow: Regardless of whether it's the smallest enemy or the most difficult Boss, upon receiving a single hit, we will always be dead.

Mr. Wolf it will immediately respawn at the start of the level and enemies, weapons, etc. will regenerate again. To continue to the next level it will always be necessary to exterminate every single enemy in the area, otherwise the area will not unlock, preventing us from continuing further.


Usually after a certain number of levels, all linked together within a single Act, we will find ourselves in a last area where we will have to defeat the Boss on duty through different and varied combat from time to time.

It is clear that to move up in the ranking we will have to approach each area over and over again, in an unstoppable whirlwind of die & try, trying to find the right combination of quick kills, spectacular combos and paths to follow.

The level of mastery of each area will grow proportionally to the refinement of our technique to complete it, arriving, personal skills permitting, to clean up every single map in a few seconds, slaughtering all the enemies, splashing from one side to the other like crazy killer tops .

The game world will be your weapon

The most striking thing about Bloodroots, in the true sense of the word, is that in addition to the weapons that you can find such as swords, axes, katanas, which will have a very limited duration, usually 2-3 shots maximum, practically any object that is part of the game scenario will be equipable and you can use it as a weapon.

The reduced durability will force you to take up many different weapons at each run per level, going from a saber to a carrot, from a sword to a roasted fish, even riding barrels or using wagon wheels.

All while the enemies will increase in number, skills used and difficulty, making the game extremely frenetic and adrenaline. Moreover, some improvised weapons such as ladders or long beams will allow us to move vertically through the setting and depending on what we are holding we will have different movesets, and suitable or not for the various types of enemies.

Our goal will be only one: to clean up every single area of ​​all enemies in the shortest possible time, making sure, through the use of all the most suitable weapons for the purpose, to chain the greatest number of kill combos in order to make go up the multiplier that we find on the screen.

It is true, needless to hide it, to get to receive high marks and rankings of a certain importance, we will have to:

The graphic style it seemed very inspired to us, the reference to some cartoons of a few years ago seems evident. The color palette in each map is varied and full of saturation, the characters are well drawn and detailed down to the smallest detail.

On graphic sector there is little to say: tested on very high-end PCs, the game runs very smoothly without ever dropping frames, but on the other hand it is certainly not one of the most demanding types in terms of hardware performance. Among the options there is very little to adjust and probably, had we tried it on the other consoles, the result we imagine, would have been the same.

The sound artistically speaking, the music is always appropriate to the context and above all they keep the rhythm well for very excited phases of the game, which otherwise, with particularly staid music, would have seemed rather out of sync.

Once played Bloodroots, you want to go and see what other such funny and inspired titles we might have lost from Paper Cult, assuming that this last work is the temporary culmination of a rich journey. And instead we find only one other game, moreover of little success, for which the leap forward of the small Canadian indie studio is even more surprising. Bloodroots is a frenetic and adrenaline-pumping concentration of violent combos, breathtaking stunts and humor, which never hurts in a production like this. The addicting and original gameplay will keep us hooked for several runs, between laughter and a curse for dying stupidly. Once we have conquered the world peaks through the exploits of our Mr. Wolf we will have little else to ask from the game, but in the meantime…. Have fun!