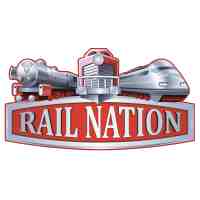 Travian Games' new browser game has kicked off the Open Beta, anyone interested can now register and try the game for free!

The game, as the name suggests, is nothing more than a management software in which it will be possible to manage and make use of one's railway networks, a real empire of trains!

It will be possible to discover new technologies, thus being able to exploit ever faster and more reliable trains, together with new control technologies and much more ... but not only! We will also have to pay attention to the maintenance of our railway network, or we could risk causing some accidents!

We leave you now to the official press release:

Milan, 9 September 2013- Trains have always fascinated everyone: millions of enthusiasts all over the world dedicate their free time to the fascination given off by everything to do with railways, locomotives and the routes they follow. Successful board games, computer games and TV shows dedicated to this subject but, so far, no contemporary online game that deals with this area so dear to the public. Travian Games and its subsidiary Bright Future (Miramagia, FIFA Manager 13) have largely satisfied this request. Now the tracks are ready and the free-of-charge Rail Nation is feeding power to the station for its first open beta trip!


Over 250.0000 railway fans are already competing on different servers in Germany, France, Russia and the Nordic countries. And starting today, every Spanish-speaking rail fan will be able to play Rail Nation in their own language.

In fact, the game is finally available fully localized also in Spanish. The strategy game is divided into six consecutive railway eras and has undergone a period of delicate fine-tuning during an intense closed beta phase with thousands of players.

Now all strategy players interested and passionate about railways have the opportunity to found their own railway company, use their strategic know-how to create economically viable means of transport and create alliances in the form of companies:

Since movement is everything in the rail business, Rail Nation has a dynamic landscape map and 3D train models. Each new digital railroad tycoon develops their personal wealth and corporate prestige in direct competition with other companies. Cunningly, it has to plan strategic routes with full schedules for transporting over 40 different types of products.


The rising profits can then be used to build a growing fleet of steam, diesel or electric locomotives and different types of railcar. Over the course of the game, the company can serve more and more cities and face challenges involving large-scale transport against other players. Targeted deliveries of goods to various cities also influence their development.

Players cannot afford to neglect their railway infrastructure, and have a chance to win huge bonuses if they make the correct improvements to their hangars, control centers or train stations.

By offering the possibility of founding a multiplayer company that can unite friends, competitors or even the worst enemies, into one company, Rail Nation places great value on the common gaming experience. Rail Nation is simple to use and will appeal to both experienced browser players and inexperienced novices alike, and offers more advanced strategy options. The first true railway browser game is played in 3-4 month shifts and offers many interesting features for all train and rail enthusiasts. It is currently available in English, German, Spanish, French, Italian, Dutch, Portuguese, Danish, Swedish, Norwegian, Russian, Turkish and Greek - and many more languages ​​soon.

add a comment of Rail Nation open beta is here!